As Kentucky’s public high school class of 2009 prepares to walk the graduation aisle, it is sobering to contemplate how many of these students are fully prepared for the next challenges in their young lives.

Last year, the public school Class of 2009 established a historic first when every student, regardless of postsecondary education intentions, took the ACT college entrance test. The overall average results, shown by the far right bar in the first figure below, indicate that only a small portion – just 10 percent – of the class is fully prepared for college across all four academic areas tested by the ACT.

The situation looks much worse for Kentucky’s minority students, as the next graph shows. Last spring only two percent of the state’s African-American members of the Class of 2009 tested fully ready for college, and the numbers don’t look much better for most of the other minority groups, either. Even among top performing Asian American students, little more than one in five showed they were fully prepared for college by meeting ACT Benchmark Scores in all four tested subjects. 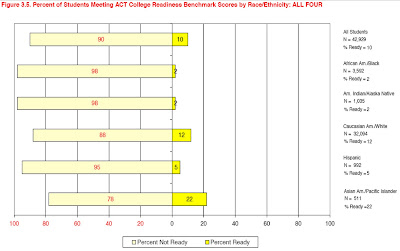 Clearly, given the increasing need for higher education for a decent standard of living and with over half of our graduates now going on to high education, we need to do far better than this.

During Gov. Ernie Fletcher’s term in office, his administration justified counterproductive Certificate of Need regulations like this:

“The purpose of Kentucky’s Certificate of Need process is to prevent the proliferation of health care facilities, health services and major medical equipment which increases the cost of quality health care in the commonwealth.”

For quite a while, this explanation worked well enough for the Beshear administration, too. In fact, a screen shot from August 25, 2008 showed that exactly the same language was still in use.

But something changed in the eight months since then.

Just noticed Beshear has a new description up:

If you look carefully, you notice that only one word was changed. “Which” in the original was replaced with “that” in the screen shot.

This actually means something. In the original, saying “proliferation … which increases the cost of quality health care in the commonwealth” means all expansion of health care options makes costs go up.

This was, of course, totally absurd.

The new version, in stating “proliferation that increases the cost of quality health care in the commonwealth” means only certain services make costs go up, but not all of them. It still leaves the government in charge of deciding who gets new health services and it still doesn’t make any sense economically, but the grammarian and logician in me appreciate the minor shift.

Expanded gambling advocates in Frankfort and beyond have pointed to the recession and a lack of racetrack casinos as the reason for Churchill Downs cutting back from five days of racing a week to four.

But OnlineCasinoAdvisory.com tells a somewhat different story. The site suggests Churchill is devoting more of its business activity to online gambling as a substitute for live racing and quotes Churchill CEO Bob Evans talking about growth in online wagering.

The article even jokes that perhaps Gov. Steve Beshear might seize racetracks in surrounding states, given his ongoing efforts to take private web sites from outside of his jurisdiction. Bottom line is perhaps things aren’t necessarily so dire at the tracks as we have been told. Could they just be cutting overhead as the online business grows?

Why Have “Highly Skilled Educators” if We Don’t Use Them?

A rare event is taking place in Kentucky. Another extraordinarily poor performing school’s Site Base Decision Making Council (SBDM) is going to lose its governing authority.

This time, it’s the Two Rivers Middle School in Covington that is finally up for some long overdue changes.

But, how effective will the changes be?

In February 2007 the Holmes Junior Senior High School, also in Covington, lost its SBDM authority. However, the Kentucky Board of Education hardly made much of a governance change, merely shifting control from the SBDM to the local school superintendent.

Now, it looks like the same approach is being recommended for Two Rivers.

Back in 2007, I asked why the job wasn’t’ given to people who are supposed to be specially trained for this – the “Highly Skilled Educators.”

And, this time, I’m asking another question: why doesn’t the staff note on Two Rivers Middle School even mention the fact that the superintendent route was already tried in Holmes High?

Even the most rudimentary common sense management approach would dictate that the performance of the high school under the superintendent should be examined before blindly taking the same approach for the middle school.

By the way, I took a quick look at Holmes High’s 2008 Kentucky Performance Report (KPR) to see how things went after the superintendent took over in February 2007.

Here are some tidbits from the high school data on page 3 of the KPR:

Scores for the key subjects of math, science and social studies fell from 2007 to 2008. Attendance dropped, and so did the inflated graduation rates. The only scores that rose notably were in writing, and we now know that even the legislature has questions about inflation in scores for that subject after the unanimous passage of Senate Bill 1.

So, how’s that again about transferring control to the superintendent instead of someone who is supposed to be trained for this sort of situation?

State revenue drop not the end of the world

Kentucky’s revenue numbers are highly volatile in April and May and were unusually high in April 2008.

But that isn’t going to stop some from taking one month of statistics and extrapolating out to a justification for more tax increases. 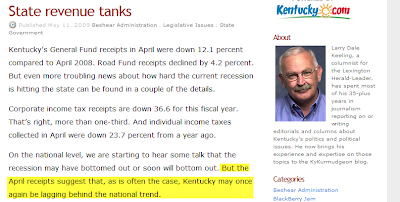 We’re down just 1.6% for the whole fiscal year, Larry Dale, and still don’t have any idea how much we are wasting on education. And the $113 million “shortfall” between this year and last year could have easily been made up with repeal of Davis Bacon.

What we have is much more of a political problem than a financial problem.

If we want to use “the children” for more than cheap sloganeering and political tomfoolery only to make government bigger and more expensive, we should take a good look at how school choice forces government to serve all people better.

The word is spreading.