We have been posting articles on the new ACT scores for Kentucky’s 11th grade students, including some information from the ACT Profile Report that you probably are not going to hear about elsewhere.

Here is another graph from the Profile Report that shows the gap in college preparation for Kentucky’s Black students is a huge problem. The ACT college readiness benchmark scores indicate a student has good odds of passing the first related college courses. 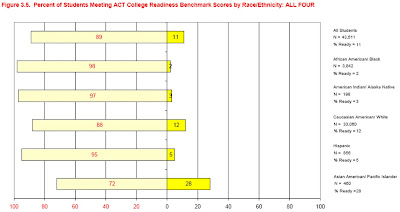 By the way, that relatively high figure for our Asian-American students shows much higher college readiness scores can be achieved by all our 11th grade students.

Still, the sad fact is that very few of our kids are really being prepared for post-secondary education by our overly CATS focused education system. Once again, whatever CATS was testing, it wasn’t what our kids needed. Our educators and the Kentucky Board of Education need to keep that thoroughly in mind as they revise our testing program from CATS to what will hopefully be a much better system.

You can find more about the ACT in the freedomkentucky.org Wiki site here.

College preparation of our 11th graders is woeful

In the critical areas of math and science, the ACT results show our students are indeed woefully under-prepared.

These flat results for the second year of 100 percent ACT testing of Kentucky high school students also indicate that the lack of emphasis on the ACT and college preparation under our old CATS system was a grave mistake. The ACT and the 10th grade PLAN test, also from ACT, only counted for a measly 5 percent of the total CATS score for our high schools. Thus, our schools continued to focus on whatever CATS thought was important, which clearly isn’t what our kids need for postsecondary education, and both our students and the state have suffered in consequence.

For more on the ACT results, check out the freedomkentucky.org Wiki site here.

What an inspiring group of leaders we have looking out for our interests in Frankfort! Gov. Steve Beshear says outgoing transportation Secretary Joe Prather has “reduced political influences.”

Wow…That makes me feel soooooooo much better. I was worried that with these yet-to-be-fulfilled promises to make government more transparent that the best policies for cleaning house at the huge transportation cabinet were being neglected!

But we don’t really need any more than the politicians telling us that everything is great, do we?

Just one thing left out of this story: Prather’s tenure included putting up new traffic lights near his home in Hardin County the very day he began his job.

“The signals were installed despite an agency review that found them unnecessary.”

It appears we’re “traveling” in the right direction, doesn’t it?

Efforts to improve education, especially for black students, have failed to produce anything close to acceptable results in Jefferson County. It’s time to take action!

New data on ACT college entrance test scores for 2009 are starting to trickle out. About a week from now, the ACT, Inc. will release a nationwide report about how high school graduates in all states performed (scheduled to be released on August 19).

However, two days ago scores from special, Kentucky statewide 11th grade testing were released, and you can find some of that 11th grade ACT data on the freedomkentucky.org Wiki site.

Jim Waters had some initial comments on those 11th grade results, but the data reveal a lot of problems beyond the overall message that less than half of our students are college-ready, so let’s discuss the new scores in greater detail.

One of the major disappointments of Kentucky’s education reform, which celebrates it’s 20th anniversary next year, is that promises to fix racial and disadvantaged student achievement gaps have not been kept. That is dramatically clear in the new ACT data.

Overall, 11th grade White students in Kentucky got an ACT Composite score three full points higher than the state’s Black 11th graders achieved, 18.6 versus only 16.6. On the 36-point ACT scale, that is a huge difference.

Even worse, although the gap actually narrowed slightly for the two racial groups between 2008 and 2009, that only happened because the White ACT Composite score actually dropped 0.3 points in that one-year interval. That is not the way we want to reduce gaps! In addition, with Whites making up the vast majority of our school enrollment, a drop in their scores has dramatic implications for the overall ability of the state to generate more college graduates at a time when this is a widely recognized and vital need.

Blacks aspiring to go to college especially at disadvantage

While it is obvious that some 11th grade students have no interest in going on to college, the ACT provides separate scores for those students who clearly demonstrate an intention to go to college by taking the core course load that colleges desire. While 58 percent of Kentucky’s 11th grade Whites took the core courses colleges desire in the 2008-09 school year, only 41 percent of the state’s Blacks did. And, even though a notably smaller percentage of Blacks took the college curriculum, their ACT Composite score gap was larger compared to college bound Whites than the overall gap was for all students.

In 2008 the female – male ACT Composite score gap for Kentucky’s 11th grade students was only 0.5 points. That swelled to a 0.7 point gap in 2009 when female scores rose slightly while male scores dropped slightly. This adds to other evidence that the Kentucky Education Reform has been boy unfriendly.

One final note: the data released on Kentucky 11th grade testing is not fairly comparable to the data for 2009 graduates that the ACT will release in a week. Because only a handful of states do 100 percent testing of 11th grade students, blanket state to state comparison of ACT scores isn’t appropriate. So, watch out for other media outlets that try to do such simplistic comparisons. We’ll be talking more about that as the rest of the ACT data becomes available, so check back here for the “right stuff.”

ACT scores: Less than half of Kentucky’s students ready for college-level English

More evidence that Kentucky’s public-education system is failing to adequately prepare students for college, much less the rigors of the 21st century global marketplace, are splattered on today’s front page.

Notice the continued excuse-making for ACT scores which “show that less than half of public high school juniors in Kentucky are ready to do college-level work in English, algebra and other subjects.”

Instead of accepting that the commonwealth is not preparing its students for the future, longtime KDE spokeswoman Lisa Gross offered two excuses:

Excuse No. 1: “Overall, the scores have not changed a great deal.”

Gross admits that “we’re not meeting the needs of minority kids for some reason,” yet offers no plan for finding the reason and meeting those needs.