Over the past week and a half I posted several items about special education in Kentucky, including:

Now, let’s look at how the money doesn’t always go where it is needed.

The graph below was presented to the Kentucky legislature’s Interim Joint Committee on Education’s “road show meeting” at Midway College on July 13, 2009. 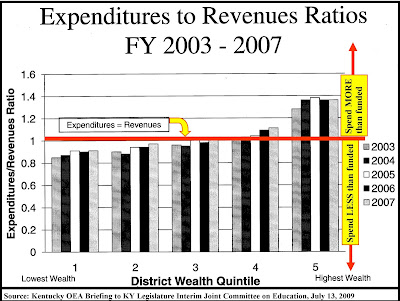 The graph does not show data for individual districts. Instead, the graph divides the districts into five separate groups, or quintiles, according to the assessed private property values in each district. Information for the group of districts with the lowest 20 percent of property wealth, the first quintile, is shown by the first set of bars on the left of the graph. The data for the state’s wealthiest districts, the fifth wealth quintile, are shown by the set of bars on the far right.

An important feature of the graph is the horizontal red line, marked as the “Expenditures = Revenues” line. If a ratio bar for a given year falls below the line, then the related group of districts received more money for special education students than they actually spend on special education services. On the other hand, districts that received inadequate funding from state and federal sources had to make up the difference in local tax dollars and the bar extends above the red “Expenditures = Revenues” line.

Several things are apparent in the graph. First of all, the costs of special education are growing everywhere. According to page 104 in the companion report to the slide presentation revenue for special education in Kentucky grew from $408 million in FY 2003 to $539 million by FY 2007, which is a 32 percent jump.

Perhaps even more important, the graph above makes it clear that the revenues are not being distributed properly. Poor wealth districts get more than they need while wealthy districts are being underfunded.

Worse, money that should be fenced to support special education students winds up in the general fund of Kentucky’s poorest districts instead. As such, this money acts as a stimulus for the low wealth schools to label even more kids as disabled when the truth may be that these kids are just being badly served in regular classrooms.

It’s a bad system; one that excessively burdens taxpayers with a bait and switch ploy while tending to overload schools with kids who are identified as disabled. That, in turn tends to reduce the real assistance given to kids that really are learning disabled, which drags the entire process down.

Kentucky officials want out of a requirement by US Education Secretary Arne Duncan that states must allow charter schools in order to get in line for stimulus funds being released this fall. Commentator Jim Waters reveals why in this latest edition of the Bluegrass Audio.

How did we ever make it before nanny government?

The title of this entry is the same as that of a column written a few years ago by Walter Williams.

While the column is dated, the principles it espouses are timeless.

A worthy exercise would be to read Williams’ column in light of all the attempts by today’s health nannies to protect us from ourselves through policies that trample on individual liberties and private-property rights. Examples that come to mind: government-imposed smoking bans and the banning of the use of trans fats by restaurants.

Williams clears the air on this issue when he writes: “In a free society, government has the responsibility of protecting us from others, but not from ourselves.”

KLC smells like KFC: the original recipe for government payola

Government can pickpocket the taxpayer to pay for lavish hotel rooms and high-priced escorts at night and then undercut the private-sector insurance rates during the day.

What education is needed to get a job?

Strive Cincinnati/Northern Kentucky just blogged on jobs research from the University of Cincinnati. The blog covers the region that includes Northern Kentucky. The research looked at the level of education required to get various kinds of jobs versus the percentage of the population that has the required education. Here is how that Strive analysis looks:

Note that nearly half the jobs in the region require at least a bachelor’s degree but less than one in five people have that level of education.

The region, which includes some of Kentucky’s most upscale communities, is also behind the education requirement even for less demanding jobs that only need some level of postsecondary training such as an associate’s degree.

Experience alone isn’t good enough to land a job, either. The region has more than enough workers for the kinds of jobs that require experience or some sort of long-term training.

For the rest of the population which is only qualified for jobs that take little training, it’s a buyer’s market. Available workers in this lowest education category outnumber the jobs by a factor of almost two to one.

The Kentucky Department of Education announces that, “Terry Holliday, superintendent of the Iredell-Statesville school district in Statesville, North Carolina, has been selected as Kentucky’s fifth commissioner of education.”

Holliday brings some impressive accomplishments to the job. Under his tenure, his district won the prestigious Malcolm Baldrige National Quality Award. These awards recognize companies, organizations, businesses and other entities that have shown long-term improvement in quality and productivity.

To earn that award – and many other accolades – Holliday closed achievement gaps and spurred marked improvement in graduation rates (both of which are badly needed in Kentucky!) and other student achievement measures.

I talked about Holliday with a newspaper staffer who serves the Iredell-Statesville school district area in North Carolina about a week ago. About the only complaints against Holliday seem to be from some teachers who claim Holliday made them work harder. This newspaper man will be sorry to see him leave.

Holliday brings some great skills to his new job.

As a North Carolina educator, he is intimately familiar with value added assessment programs. That is what we needed, but never got, from our now disbanded CATS assessments. As we rework CATS, Holliday’s background could be of inestimable value to that process.

As a data-oriented individual who even impressed the data hounds at Baldridge, Holliday understands issues we have pushed at the Bluegrass Institute for years.

This time, our Kentucky Board of Education might just have got it right. We look forward to meeting Dr. Holliday and watching what he can do for Kentucky.