According to the State Journal, the Kentucky Educational Collaborative for State Agency Children (KECSAC) was created in 1992 to provide extra funding for, “children who had been placed in day treatment facilities, group homes and residential programs by the Cabinet for Health and Family Services. Youth in the custody of the Department of Juvenile Justice or its facilities also qualify.”

The key is that the funding only is to flow to children who are specifically placed in special schooling situations by a state agency or by the justice system.

But, that didn’t stop some special schools who serve agency children and who also admit other kids with problems from claiming the money for all of their enrolled students regardless of whether those students met the legal requirement of statute to receive KECSAC funds.

Now, the State Journal reports that the KECSAC will no longer pay the extra, undeserved money. For one single school in Frankfort that enrolls only 50 kids total, but where only about 10 are true state agency children, the error ran up payments by $100,000 a year.

Statewide, the Journal article indicates about one in four special schools got similar overpayments because students were not properly identified according to the statute. Clearly, the total amount of misdirected money is considerable.

One of the really sad things here is that the overpayments for too many kids diluted the support that the true state agency kids actually received. This also shortchanged those special schools that played the game honestly and didn’t over-claim their state agency student population.

Now, finally, almost 20 years after the KECSAC was started, the money will only go to the state agency children that deserve it, which will notably increase the support to these children.

Sadly, the State Journal’s headline couldn’t get it more incorrect. Schools like the one in Frankfort are not “losing” anything. They provided inflated data that resulted in their being illegally overpaid. It was the kids who were really supposed to get support, the other schools that reported honestly, and the taxpayer, as always, that turned out to be the losers here.

The truth is that Frankfort, and its newspaper, owe those true state agency kids and the honest schools that serve them an apology.

– And in Kentucky, too

Well, right here in Kentucky we continue to get bloated high school graduation statistics based on a discredited calculation that uses discredited dropout statistics – a process that was officially audited in 2006 and found to be well off the mark.

Still, three years later, no-one but the Bluegrass Institute and the State Auditor of Public Accounts seems to care.

Since the Kentucky Board of Education and the Kentucky Department of Education won’t do it (I tried), when will the legislature finally step in and demand a better quality high school graduation rate calculation?

The backlash to the new busing plan for Jefferson County Public Schools is generating increasing backlash. The Courier-Journal reports that the lawsuit started by two parents of five-year olds who were going to be bused 20 to 28 miles to school each day, one way, has now been joined by a third outraged parent.

At last count late Thursday evening, the Courier’s article had nearly 150 comments, which is a huge number of reader reactions for this newspaper. Skimming through them in a mostly subjective way, it seemed like the vast majority were unfavorable to the bus plan, the school district, or both.

I also learned something else.

One of the three parents suing the district was told his child would be forced to travel about 20 miles away to the Shelby Elementary school instead of the local area school.

Now, that is really curious.

According to the “NO CHILD LEFT BEHIND, Adequate Yearly Progress, 2008 School and District Results, August 5, 2008 Release” Shelby Elementary School is in Tier 3 status under No Child Left Behind. That means as of the summer of 2008 this school has failed to make adequate yearly progress for four years in a row.

Quite important to the current discussion, parents of students already in that school had to be offered the right to transfer their students out to better performing schools.

Now, along comes the school district, and without blinking an eye, it requires the five-year old in question – to be bused IN to this school from all the way across town – and the parent can’t say NO!

I may have more to say on this once the Kentucky Department of Education fixes its Web site area for the individual NCLB school report cards.

The problem here is that those dropout rates are notoriously inaccurate.

In fact, Bell County shows up in the audit as one of the most serious dropout under-reporters in Kentucky. Actual dropouts during the school term in the county were over 270 percent higher than what got reported to the Kentucky Department of Education.

Adding more fuel to my concerns, I ran the numbers for Bell County’s high school graduation rate using the “Freshman Graduation Rate” formula, which is one of the best performing approximation formulas in this federal study.

The graph shows how that turned out. 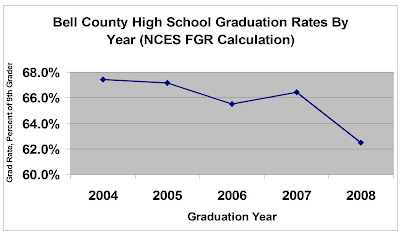 It’s hard to have a decreasing dropout rate when your graduation rate is also decreasing.

Data sources for the graph are the Kentucky Department of Education’s Excel spreadsheets for Transition to Adult Life (which shows the total of all diplomas and certificates of attendance awarded each year) and the Department’s Growth Factor/Ethnicity Reports for the appropriate years for each ninth grade enrollment for each graduating class.

I really hope Bell County is helping more kids, but the numbers I see certainly don’t show that.

The Kentucky Attorney General’s office has issued an opinion regarding the recent secret evaluations of Jefferson County Public Schools superintendent Shelly Berman, which we commented on earlier here and here.

For some compelling reasons why the local board of education, which publicly gave Berman a glowing report, might want to hide the superintendent’s evaluation, consider this performance information, which comes from an earlier blog. Enrollment data on school membership from the Kentucky Department of Education shows there were 648,628 students in Kentucky’s public schools in the 2007-08 school year. In that year 93,941 students – just 14.5 percent – attended Jefferson County schools. Yet, as this graph shows, the district has a much higher proportion of schools in trouble both under No Child Left Behind and under the state’s own assessment program.

The economic double-talk of state political leaders offers the impression that state government is shrinking. Actually, state spending is virtually on autopilot to increase each year. Commentator Jim Waters says it’s time to turn off the autopilot.