The National Education Association was caught fibbing about the performance of the Washington, DC, school voucher program.

Per the Wall Street Journal, the union seriously misrepresented performance of students in the voucher program, which gives students a publicly financed money voucher that they can use to attend any school, either public or private.

The Journal quotes the union saying, “Over its five year span, the pilot program has yielded no evidence of positive impact on student achievement.”

The paper then points out that a recent study from the US Department of Education found, “Voucher students…are reading almost a half-grade level ahead of their peers,” and that the voucher program’s, “Earliest participants, … are 19 months ahead after three years.”

There seems to be a failure here, but it isn’t with vouchers, but rather with character and honesty. Either the Wall Street Journal is way out of line, or the largest teacher organization in the country is.

The editorial did a good job of addressing how Kentucky’s prevailing-wage policy is harmful to the commonwealth’s economy: “Rather than allowing the free market to deliver the best value, these laws require labor prices established at the prevailing (which is to say union) rate.”

Is anyone in Frankfort listening?

The American Indian Public Charter Schools in Oakland are “Spitting in the eye of mainstream education” according to the Los Angeles Times.

The American Indian schools waste no time making the point that they are different, saying they, “…are looking for hard working people who believe in free market capitalism. . . . Multicultural specialists, ultra liberal zealots and college-tainted oppression liberators need not apply.”

That’s a slap in the face of most of the education philosophies we hear in Kentucky.

The only problem for Kentucky-style education philosophy is that the inner-city Indian Public Charter Schools (97 percent of students are disadvantaged) outscore almost all the rest of the schools in California on state tests. The middle school ranks fifth in the entire state of California on that state’s public school assessments. 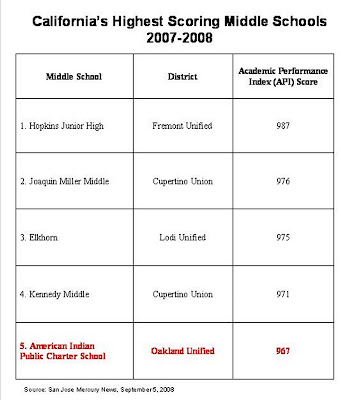 That includes some of the nation’s most upscale residential areas.

There is a lot more, as well. According to American Indian’s School Accountability Report Card, Reported for School Year 2007-08 the school is doing an outstanding job academically on the California Standards Tests (CST). The school’s trend over the past three years is strongly positive, showing students perform far above California and Oakland District averages. 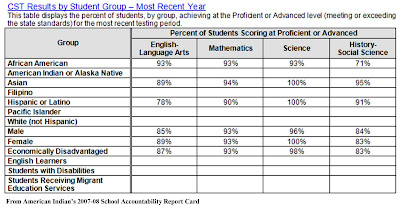 Except for African-Americans in History-Social Science and Latinos in English-Language Arts there are no significant gaps. And, even for those two groups and subjects, test scores are remarkably high.

Note that some groups of students are so small in number that their scores are not reported. The biggest standout is that this is strongly a school of color. About half the students are Asian, and the rest divide pretty evenly among Hispanics and African-Americans. Whites are virtually nonexistent here. However, because the Asians are high poverty, and they are balanced by the combined numbers of normally low-scoring Hispanics and African-Americans, the test results are most unexpected.

One last point: the school has no problem with discipline.

Thus, this charter school really does look like a school to watch, by any measure.

To learn more, and to see some of the remarkable, in-your-face philosophies in this school, check out its Web site here.

The Bluegrass Institute has been concerned for years about the fact that Kentucky’s public schools have consistently had among the nation’s most top heavy staff to teacher ratios of any state in the nation. We’ve pointed this out since our first publication of our “Ten Great Reasons for School Choice” flier.

Averaged across the United States and Washington DC, the ratio of teachers to total staff is 51.5 percent, meaning there are slightly more teachers than all staff combined. Here in Kentucky, however, the latest available data shows our teacher to total staff ratio is only 43.9 percent, way below the US average. That means staff significantly outnumber teachers in the Kentucky public school system. 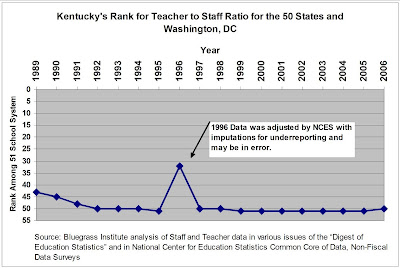 Simply put, we have a lousy “tooth to tail” ratio. And, its teachers, not staff that research shows to be the most important factor in education. We even agree with the Prichard Committee on that one.

Now, thanks to tight funding, some of Kentucky’s excess fat is getting cut, at least in one school district. Oldham County Schools are doing a smart thing and evaluating low productivity staff positions and eliminating them.

Other school districts would do well to follow the Oldham County example. In these lean times when thousands of Kentuckians simply cannot afford the burden of more taxes, it behooves our schools to join the private sector to aggressively seek out and eliminate inefficiencies. And, as the graph above shows, a great place to start is to examine the top-heavy staffing found across all our school districts.

No charters, no stimulus money

The Associated Press is emphasizing recent comments from the US Secretary of Education that $5 billion in second round stimulus incentive funding will mostly flow only to states that don’t impede charter schools.

Without even a charter school law on the books, it looks like Kentucky could be left out in the cold.

The news agency also says that this federal money will be withheld from states that attempt to creatively reallocate it to other than federally intended uses. That could also hurt Kentucky if it tries to grab second round stimulus money with a “quickie” charter law that just sets this type of school up to fail or attempts to siphon much of the incentive cash away for any other uses.

What Indians find when they move back to India

“The education system here is excellent. The kids have learned so much more here, I think, than in the U.S.”

Deepa Venkatesh on what she and her husband found when they moved to India from San Diego, quoted by National Public Radio here.

A superior education system is one reason why you get to talk to someone in India when you have problems with your computer. It’s also a reason why India’s economy has not been hit nearly as hard as ours by recent economic events.

This is why we cannot continue to accept low performing schools in the United States. We mortgage our kids’ futures otherwise. Right now, Indians have choices, and they clearly are exercising them, leaving upscale places like San Diego to find even better educational systems overseas.