NASA scientist James Hansen wants the attention that a protest (along with actress Daryl Hannah and 28 others) in front of Massey Energy in Charleston W. Va. brings, but he doesn’t want a real debate.

Massey Energy CEO Don Blankenship offered to debate Hansen about the environmental impacts of coal mining on mountaintops. But noooooooo, Hansen wouldn’t do that. He would agree only to participate in a public discussion, “but not an adversarial debate.”

Hansen apparently doesn’t want the rigors required by a real debate. That would require preparation, knowledge, supporting facts, well-established and articulated positions. Instead, he apparently wants a syrupy, enviro-lite discussion void of requirements that tough questions be answered and extremist environmental positions be supported — an event where he can get the crowd on his side even if the truth is not.

School districts have to pay

Education Week reports that the U.S. Supreme Court has ruled, “Federal law authorizes reimbursements for private school tuition, even when a child has never received special education services from a public school.”

Apparently, the school district involved had, “Unreasonably failed to identify a child with disabilities.” Reports EdWeek, “The case raised the question of whether parents in a special education dispute with a school district may be reimbursed for ‘unilaterally’ placing their child in a private school when that child has never received special education services from the district.”

Had the court not intervened, local schools would have maintained the ability to unfairly deny services just to save money. But now, the local district will have to pay the costs for the special private school the student in question wound up attending.

As a consequence of the ruling, schools around the country will have to be more careful about denying special education services to students who really need them.

Naturally, the National Education Association, which fought against the court’s final position, is upset. The union thinks this will siphon money away from public schools. Maybe so, but if the union really cared about kids, they would realize that if proper services hadn’t been denied by public schools in the first place, this court case never would have happened.

As it is, this issue looks like a tar baby for the union, and the union and its members are “stuck” with the onus of looking like they actually condone failure by public schools to meet the needs of learning disabled students.

‘Racinos’ not the answer to economic woes

The state Senate Budget Committee voted this week to kill a bill that would have expanded gambling at Kentucky horse tracks. However, we’re under no illusion that this will be the last we hear on the issue. Commentator Jim Waters explains why ‘racinos’ are a bailout the commonwealth could do without.

Kentucky’s site base councils instead of charter schools?

– Surely someone is joking!

US Secretary of Education, Arne Duncan, has repeatedly stated in recent weeks that states which want to compete for second round stimulus money for education must not have laws which inhibit charter school operations.

It looked like a real threat for Kentucky because we don’t even have charter schools here (except for special cases of Gatton School of Math and Science at Western Kentucky University and the Model Lab Schools at Eastern, both of which somehow just happen to be located in districts of powerful house leaders).

Now, the Kentucky School Boards Association reports that Governor Beshear and Kentucky education secretary Helen Mountjoy are trying to sell the US Secretary of Education a bill of goods that Kentucky’s site based decision making councils (SBDM) are somehow equivalent to charter schools. Therefore, Kentucky should be able to compete for second tier stimulus money even though charters are illegal here.

Just to get the conversation started, charters, as their name indicates, are run by a local chartering agency (perhaps a college or university, or a mayor’s office). That chartering agency generally isn’t part of the established school bureaucracy. The charter grantor has the ability to hold the schools accountable. The chartering group is also located close to the school where it can provide extra assistance as well as helpful oversight.

SBDM schools don’t function in any way like this.

Now, how about your inputs? Do you think SBDM are a suitable substitute for real school choice charter schools?

Kentucky’s public education system adequately preparing only one in four

A new Bluegrass Institute analysis of data from the Kentucky Department of Education and the Kentucky Council on Postsecondary Education indicates that only 25 percent – just one in four – entering public high school students in Kentucky are adequately prepared for college upon high school graduation.

The public high school Class of 2006 started its secondary school days with 48,016 first time ninth grade students, but by the time the adequately prepared remnant entered the state’s postsecondary system, only 12,181 of them had received an education sufficient to avoid college remedial courses. 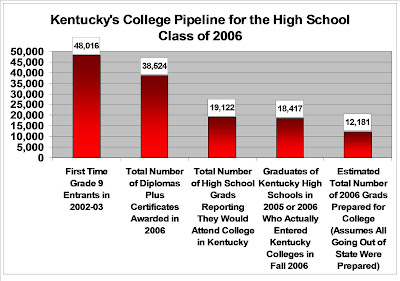 The statistics are particularly disturbing because in today’s economy, some level of postsecondary education is almost essential to earning a decent livelihood. Clearly, Kentucky education has a very long way to go when three fourths of the students entering the state’s public high schools are being left behind.

The full analysis behind the new finding is available now in the freedomkentucky.org Wiki site here.

The state Senate Budget Committee has voted 10-5 to kill the bill that would have expanded gambling by legalizing Video Lottery Terminals at Kentucky horse tracks. This came following all manner of arm-twisting and other “persuasive” techniques employed by House Speaker Greg Stumbo, D-Prestonsburg.

After the vote, Ron Geary, the owner of Ellis Park in Henderson, Ky., said that he would close the track following its 2009 meet.

Our system is flawed, but occasionally it works.