A tale of some Kentucky schools

Thanks to some extensive data collecting by Strive Cincinnati/Northern Kentucky (See the “2009 Striving Together: Report Card”), I just got a chance to compare some performance measures such as high school graduation rates and ACT scores for Kentucky Catholic Schools to those of nearby public schools. 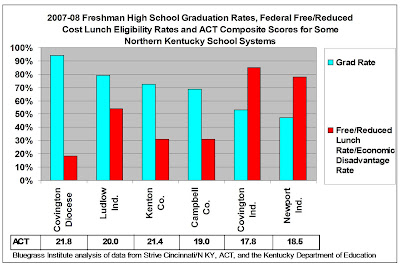 First, note that the Covington Diocese, which covers Northern Kentucky, runs away with the best-by-far Freshman Graduation Rate. This rate is the ratio of graduates in the 2007-08 school year (counts obtained from the Graduation Rate Excel spreadsheet here)to the number of freshmen who entered each school system as ninth graders in the 2004-05 term (which can be found in the Excel 2004-05 “Growth Factor Ethnic Membership” spreadsheet here).

Keep in mind that this rate tends to return figures a couple of points below the true graduation rate because of a lot of kids who are held back in the ninth grade, but federal research indicates that this approximation calculation is still among the most accurate available.

The graph also shows the percentage of disadvantaged kids in each system, which is derived from the percentage of kids who are eligible for the federal free and reduced cost lunch program. Clearly, most of the Catholic students are well-to-do compared to the public school memberships.

However, here is the first surprise. The Ludlow Independent schools have a much higher school lunch rate than either the Kenton County or Campbell County school systems, but Ludlow does a much better job of graduating its students.

Also, note that Ludlow’s ACT college entrance test Composite Score is quite competitive with other public school systems, as well. Clearly, Ludlow is a district worth watching. Also, as Ludlow borders Covington, it could even be a system of choice for parents of modest means who have the ability to move to this relatively low housing cost area.

In any event, it is clear that while the Covington and Newport Independent school districts face strong poverty issues, that they have a long way to go in educating their students successfully. Graduation rates and ACT scores in both systems are way below what they need to be.

One more note on transparency of data. Covington and Newport both provided a “graduation rate” to the Strive folks. These are based on the “official” calculation used by the Kentucky Department of Education. Covington reported a graduation rate of 90 percent, and Newport claimed a rate of 81 percent.

In fact, when the data underlying these rates from Covington were audited in 2006, the finding was that the data was grossly under-reporting the true seriousness of the situation.

For example, Covington had twice as many dropouts as they owned up to, and Newport had five times as many. Because dropouts are used to calculate the Kentucky Department of Education’s untrustworthy graduation rates, the result was that graduation rates for both school systems were grossly overstated by the “official” numbers.

Yet, the deception continues three years later. These bogus numbers even showed up in the new Strive report, though Strive warns not to try to compare them to the graduation rate for the Catholic system.

It’s back: Taxation without representation!

The first tea party to protest taxation without representation occurred on Dec. 16, 1773. We’ve come full circle and are now almost back where we started.

We are positioned to do to ourselves what no other nation could have done to us militarily or otherwise.

Congress recently passed a $1.2 trillion bill that members didn’t even have time to read. On June 26, the House of Representatives passed the American Clean Energy and Security Act of 2009. This bill contained 1,200 pages before another 300 pages were added at 3 a.m. the day of the vote. Representatives did not have time to read, analyze, debate and understand the future ramifications of this legislation before being forced to vote.

In the real world, this type of behavior is called “unconscionable, irresponsible and negligent.”

What if a private company acted in this manner and employees cried that the company was taking money out of their paychecks for things they didn’t want? And what if that company’s leaders had the power to exempt themselves from any consequences and set themselves up for a worry-free life?

In 20-20 hindsight, nothing is so much of an emergency that Congress cannot take time to read bills, analyze their impact – both now and in the future – and debate from an informed, transparent position. But there is a reason these bills have not been transparent and debated from fact: the political fat cats in Washington know that Americans would not put up with their nonsense.

The Washington legislative approach will have significant ramifications on every Kentuckian. It will negatively impact our commonwealth, its city and county governments and employers.

Wouldn’t it be nice if we all knew those ramifications and had elected officials in Frankfort and Washington communicating with us and looking out for our interests – not theirs?

Their approach may be great politics, but it’s bad policy administered with no integrity. It’s time to draw the line in the sand and demand true policy transparency, analysis and debate through responsible representation.

It’s understandable that there might not be a lot of enthusiasm for the public to know that organizations supported partially by taxpayer dollars have garnered the attention of state Auditor Crit Luallen for their “excessive spending” and “inadequate oversight.”

And no … we’re not talking about Congress or the Kentucky General Assembly.

Rather, we’re referring to the top five officials in the Kentucky Association of Counties spending “nearly $600,000 in two years on travel, meals and other expenses.”

Then there’s the matter of Kentucky League of Cities Executive Director Sylvia Lovely’s $315,000 compensation package. It’s very taxpayer-friendly like of Lovely to decide “she would discontinue several corporate perks, including … holding League functions at a restaurant co-owned her husband.

I wonder if she will also now reverse the league’s recent decision to stop complying with reporters’ open-records’ requests. Even if she does, it will be with all the enthusiasm of a vegetarian at an Independence Day hog roast.

– Kentucky still has none

Perhaps partly in a reaction to strong pressure from Washington, Tennessee will significantly increase its number of charter schools.

First priority to enter them will go to Tennessee’s most disadvantaged kids and those in failing schools or with failing grades.

Meanwhile, here in Kentucky our parents get no choices like that when their child is poor and in a school system that doesn’t meet that child’s needs.

Can’t set high education standards by shooting at your feet

The report caught my attention right away. A few days ago the Southern Regional Education Board (SREB) released a new report, “Keeping Middle Grades Students on the Path to Success in High School.” The new report discusses the proper place to set state test standards, a subject that I have discussed for Kentucky in a number of articles and papers such as here and here.

SREB uses results from the National Assessment of Educational Progress as a guide to measure the rigor in southern area states’ school assessments. Some of my analyses have done the same.

There’s only one problem – the SREB findings don’t square with what we know in Kentucky.

Back in March, we threw out our CATS assessments for cause. After considering lots of evidence, our legislators told the Kentucky Department of Education to review and update all of our education standards and then revise our tests. The legislature directed this because it was obvious the CATS tests were not properly aimed. For example, this graph from the Kentucky Council on Postsecondary Education shows 45 percent of recent high school graduates in Kentucky need at least one remedial course upon college entry. Clearly, we are not producing the caliber of high school graduates we need. 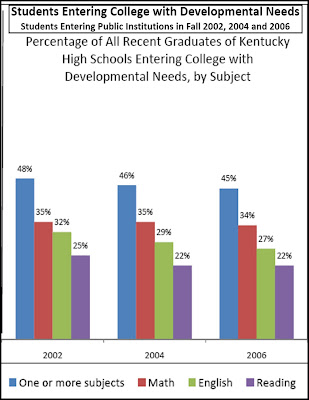 We know our kids score low on high quality tests like the new EXPLORE and PLAN tests from the ACT, Inc. We know our kids need tons of remediation once they enter college.

We know that our schools and students have to strive a lot harder.

But, never mind what we know. Table 8 in the new SREB report declares our now defunct CATS standards and the feel good scores they produced – at least in eighth grade – were, “set about RIGHT.”

I sent some of my research to the SREB folks, and I hope they take a careful look at the material. Kentucky’s experience shows SREB is shooting too low with their appraisals of state standards. Hopefully, I can help them recalibrate their sights.

In what is now part one on this subject, I pointed to the strong indication in the available data that relatively low graduation rates in Kentucky’s public colleges are due to correspondingly low percentages of students who enter the system with adequate preparation.

I noticed something else in the graph in that earlier post – there are wide variations in the gaps each school has between the percentage of students entering with adequate preparation versus the percentage that eventually graduates (within six years or less of entry).

This graph shows that gap information. 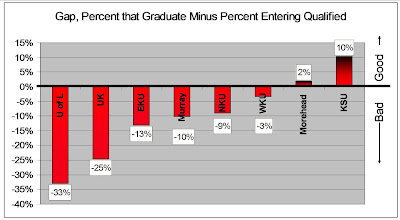 The really big surprise here is Kentucky State University (KSU). KSU doesn’t graduate very many of its students, but considering the extremely poor preparation level of the college’s entering classes (about 85% are under-prepared), KSU actually does a lot better than some other state schools in getting a proportion of those kids through to a degree.

Of particular interest, the two worst performers in my adequate preparation to graduation gap analysis are Kentucky’s most competitive schools, UK and U of L. Considering the relatively high preparation rate of their entering classes, these two schools lose a lot of kids.

Particularly in the case of U of L, the losses seem excessive, especially when you consider that U of L’s graduation rate for students who entered in 2001 was only 44 percent, while UK’s grad rate was nearly 40 percent higher.