Changing ‘people’s lifestyles’: Whose job is it?

In Lexington Herald-Leader columnist Tom Eblen’s latest column, he quotes local councilman Jay McChord as saying: “What we need to do is change people’s lifestyles.”

The column is about how 100 of Kentucky’s 120 counties are closing a street or highway for a few hours on Oct. 11 so that residents can take walk, enjoy a bike ride, run, jog “and to think about how regular exercise could make them healthier and happier.” The project is known as “Second Sunday.”

It’s a good enough idea. But the quote from the councilman has me a bit concerned.

She now recognizes a problem that I have been highlighting since the mid-1990s – despite all the hype about KERA, Kentucky continues to have far too many high school dropouts.

Well, don’t trust the numbers in the Kentucky Enquirer article. They are the “official” numbers from the Kentucky Department of Education, but the process that generates those numbers was officially audited by the Kentucky Auditor of Public Accounts in 2006 and found to seriously understate the true number of dropouts. The true numbers are at least several thousand students higher than the department is willing to admit.

The interesting thing in all of this is that there are better formulas to use, right now, to give Kentucky a better idea about high school completion rates. Maybe, just maybe, one outcome of the First Lady’s conference will be a call to move to those more accurate reporting methods right away.

Those who really care about Kentucky’s children are willing to give parents a choice.

Commish to Schools: Viewing president’s speech on education should be voluntary

Next Tuesday, September 8, 2009, at noon Eastern time President Obama will make a major speech directly to school children around the country on both CSPAN and other dedicated education channels.

While the proclaimed goal – keeping kids in school and focused on education – seems laudable, the Christian Science Monitor’s blog reports that conservative and Libertarian groups are upset about some of the supporting education material sent out from the US Department of Education.

Those groups charge the material turns the speech into a political event designed to recruit youngsters as administration lobbyists. And, I have read elsewhere that some feel the speech represents an exceptional intrusion of the federal government into the area of local determination of school curriculum.

Given all the controversy, Kentucky’s education commissioner Terry Holliday is taking a neutral and common-sense approach on the debate. Holliday says that whether or not schools present the speech to students is most definitely a local decision.

In addition, the Kentucky School Boards Association reports that Dr. Holliday’s e-mail to Kentucky’s 174 school superintendents urges schools to honor parents who do not want their children to view the speech and to plan alternative activities for those children who opt out. It’s a parent friendly approach that many in Kentucky will appreciate – one that local schools will hopefully be careful to honor.

In fact, we’d love to hear from you about how your school handles this unusual situation. You can reply anonymously to this blog item if you wish, or send us an e-mail.

(update deletes out of date reference)

Just before the new school year started, Jefferson County Schools stirred a hornets’ nest with its ill-advised busing plan. This plan requires some of the school district’s five-year olds to travel well over 20 miles each way to school, making as many as three bus changes in the process.

Now, the district has put another 1,000 plus students and their parents in turmoil thanks to another, ill-thought-out action.

For a number of years, various worthwhile after school programs have been operating in the district’s schools. These programs cover a wide variety of subjects from science to dance and visual arts. That’s a good thing. 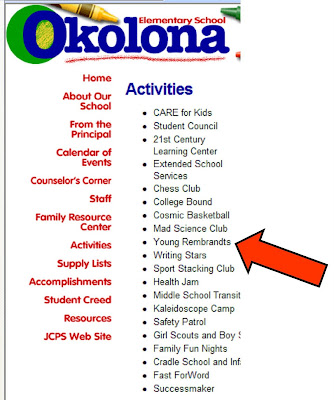 The programs were provided by for-profit organizations. Parents willingly paid the fees for these programs, which kept kids in safe and nurturing environments. It seems that everyone involved was happy.

But, not this year.

The Courier-Journal reports that someone just discovered that Jefferson County Schools has a policy that bans for-profit organizations from operating any activities in the schools.

District spokespeople make it sound like the presence of these programs was only recently discovered; but, that seems strange. Aside from Web pages happily noting these programs in the Jefferson County Schools, the district even uses some of the programs like the Young Rembrandts program as examples of how to code money transfers (as code 0590) in the MUNIS fiscal accounting system.

Surly the district would know about organizations with which it does business.

Anyway, these programs have been summarily cancelled or at least put on hold while the district tries to get its act together. At least, that is the district’s story.

So, here’s the bottom line.

(2) The programs were apparently popular and met a need.

(3) The programs were already underway in the current school term.

(4) The district can’t possibly have been ignorant of these programs – the district even had accounting codes for them.

So, given the history, wouldn’t it be far more parent- and student-friendly to allow the programs to at least continue through the rest of this school year rather than to abruptly cancel or suspend them without due notice to parents?