Jim Waters of BIPPS willl be the keynote speaker at the Murray-Calloway County Freedom Tea Party on Saturday, Sept. 12, at 10:30 a.m. at the old Brandon Auto World on Ky. 121 Bypass in Murray (next to University Church of Christ).

Grad Rates on other peoples’ minds, too

As Kentucky gets ready to host its “Graduate Kentucky Forum” this weekend, Education Week reports (subscription, but a free trial is currently available) that 13 states, eight years after passage of No Child Left Behind, still do not report separate graduation rates for students still learning English.

A PDF table linked from the news article (click on the graph titled “GRADUATION RATES 2006-07”) shows that Kentucky is one of those 13 states that still has this hole in their graduation rate statistics.

The same Ed Week table shows the overall graduation rate Kentucky reported to the US Department of Education for the 2006-07 school year. That rate is not credible. Ed Week’s table lists that erroneous rate as 83.7 percent. This rate, however, was fabricated using the same inflated formulas that were officially audited in 2006 and found to be – inflated.

So, the forum meeting this weekend has some interesting data problems to discuss. That should start with a discussion on getting serious about accurately reporting the problem to the schools and the public.

Given the controversy surrounding this speech, it will be interesting to see the reactions, especially from the target audience, the huge age span of children (Pre-K to Grade 12) the president plans to address.

That 4-year rate is important to parents and students because it shows which schools do a better job of graduating students most economically. College expenses mount up quickly, and paying for an extra year or two to get a Bachelors’ Degree can really load up the costs.

Here is how the public and private universities in the state stack up in the Education Trust’s database. 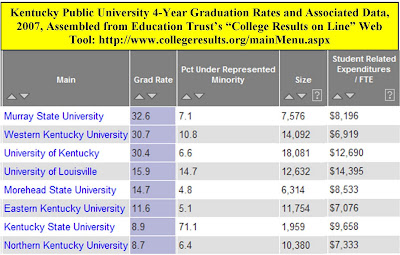 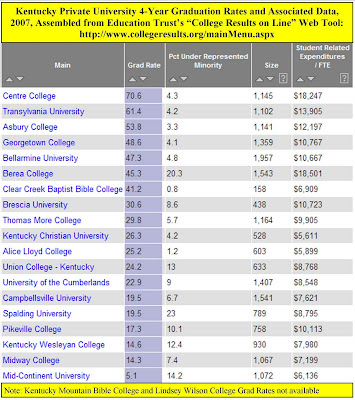 Notice that the very best 4-year graduation rate in Kentucky’s most effective public college, the Murray State University, is less than 33 percent. In other words, less than one in three students graduate from Murray state “on time.” For other state schools, the performance is even worse.

The very worst “deal” in state schools is the U of L. It has by far the highest student-related expenditures of any of the public universities, but its 4-year graduation rate is very low.

Things look better for a number of the state’s private colleges, but only a handful graduate more than one out of two of their students “on time.”

It should be pointed out that graduation rates in all of these schools quite naturally increase when students who take five or six years to graduate are added. You can do those 5-year and 6-year what-if calculations using the Ed Trust Web tool. However, the costs involved for each extra year of school mount up quickly, and smart parents and their students would do well to consider four-year graduation rate performance in college planning.

Another point is that the colleges alone do not share all the blame for the low graduation rates. Poorly prepared students from our pubic schools arrive in large numbers at our colleges’ doors with inadequate preparation. That requires non-college credit remedial course work which often pushes students into at least one extra year of college the moment they matriculate. Thus, some of the blame for the very low 4-year grad rates in the Education Trust database must be laid clearly at the foot of Kentucky’s public schools and the failure of KERA, after nearly 20 years, to produce the sort of improvement we were promised in 1990.

As a note, I’m still researching what the Student Related Expenditures/FTE actually shows, but it does not appear to directly relate to tuition costs. You can research that yourself here in Ed Trust’s technical notes, found here.

Changing ‘people’s lifestyles’: Whose job is it?

In Lexington Herald-Leader columnist Tom Eblen’s latest column, he quotes local councilman Jay McChord as saying: “What we need to do is change people’s lifestyles.”

The column is about how 100 of Kentucky’s 120 counties are closing a street or highway for a few hours on Oct. 11 so that residents can take walk, enjoy a bike ride, run, jog “and to think about how regular exercise could make them healthier and happier.” The project is known as “Second Sunday.”

It’s a good enough idea. But the quote from the councilman has me a bit concerned.