It’s often easier to talk about problems than take tough steps to fix them.

Creating committees and holding executive summits buys time and diverts attention from the real obstacles. Everyone leaves these meetings feeling good, but often nothing is different tomorrow.

Is this what will happen at Thursday’s comprehensive summit on the link between minority academic success and economic empowerment, and how embracing diversity leads to success in the global economy?

The summit at the Lexington Convention Center is sponsored by the Governor’s Office of Minority Empowerment, Finance and Administration Cabinet and the Kentucky Long-Term Policy Research Center.

This appears more an opportunity for officials to appear serious about the problem. Perhaps they are, but how will we know?

A recent Bluegrass Institute special report on ‘State of the School District: How Whites and Blacks Perform in Jefferson County Public Schools’ clearly states Kentucky’s challenge in improving the academic performance of its minority students. But where is the visible action plan to hold people accountable to close performance gaps with a sense of urgency?

Wanna bet those issues won’t be addressed at this summit?

Wouldn’t it be great if the summit attendees issued an Action Alert like the one the Bluegrass Institute issued recently to communicate the first steps to take to close learning gaps now? Just think of the impact if the Governor put his punch behind commitments made at the summit in a similar alert!

Better yet, reverse the order of events: Hold a summit after the challenges have been addressed in order to highlight the positive progress made in improving academic success, increasing economic empowerment and embracing diversity.

But that approach would take leadership and requires courage. Actions would speak much louder than words. Any takers with the responsibility, accountability and power to make a difference?

Some media coverage of the press conference held in Louisville on Monday to release our report on Tier 5 schools in Kentucky can be found here, here and here

Some good news from Kentucky testing

The plan to give a coordinated set of tests from the ACT, Incorporated to boost college preparation of Kentucky’s students seems to be working, at least for three of four academic subjects. These tests, known as “EPAS tests,” have been given to all of Kentucky’s eighth grade and tenth grade students since the fall of 2006.

A longitudinal comparison of the percentages of students scoring at or above the Benchmark scores that signal adequate preparation for college is shown in this figure. The same group of students took both tests in different years. 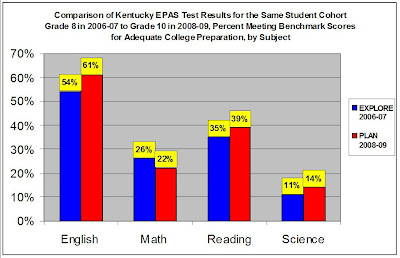 These students made notable improvement in performance in English between their eighth and tenth grade year. Improvement is also evident in the percentage of students who increased readiness for college level reading and science courses.

The only performance decline was in mathematics, a perennial problem subject in Kentucky.

While this first-time analysis looks at the performance of only one class, it is generally encouraging and hints that the law establishing this new testing program in Kentucky may indeed spur more students to be fully prepared for college. We will learn more next year when this same group of students takes the ACT college entrance test next spring, completing their journey through the new EPAS program.

The Courier-Journal’s news article about the Bluegrass Institute’s news conference yesterday concerning the new report on Kentucky’s lowest performing schools under No Child Left Behind contains a remarkable set of comments from the Kentucky Department of Education.

Department spokesperson Lisa Gross also said that, “We’re not anti-charter, and we support looking into them.”

Perhaps so, but this is the first time I ever recall seeing anything about the department even exploring the idea of charter schools. Certainly, this is good news, and, as Kentucky’s leading organization pushing charter schools, the Bluegrass Institute hopes to interface with this exciting new effort that, done right, offers notable promise of improving education in Kentucky.

Show your support for Charter Schools in Kentucky by voting “Yes” in our latest poll question at www.bipps.org.

– Report: Five-year olds experiencing two to two and one half hour bus rides

Check the story out here.