The recent brouhaha over President Obama’s speech to school kids left the popular press wondering why there was so much fuss from conservatives.

I now know more about why conservatives were upset about this speech, courtesy of the Eagle Forum Web site.

Apparently, a contentious You Tube video (find the link in the Web article from Eagle Forum), shown in at least one school about two weeks before Mr. Obama’s speech, had raised conservative “antennas” to a high level of vibration.

All teacher graduate programs certifications to “Sunset” in Kentucky

Last night’s KET special on “Kentucky Principals, Leading by Example” (sorry, not yet on line) contained a stunning revelation.

In all cases, education schools will have to reapply for certification under new guidelines to meet new standards for both the Masters and the principal preparation programs.

While Rodgers didn’t say so, this dramatic change appears to be driven at least in part by Senate Bill 1 from last winter’s regular legislative session.

Regardless, the implications of this announcement are stunning.

The Bluegrass Institute and other independent education observers in the state have been raising concerns about the preparation of teachers for some time. Lately, the Prichard Committee for Academic Excellence has been beating war drums on the topic. When Prichard and Bluegrass Institute agree, someone needs to act!

Now, action indeed seems to be taking place. Dr. Rodgers remarkable announcement amounts to an admission that there are indeed major short-comings in several key areas of teacher training.

What remains to be seen is whether undergraduate teacher preparation programs will also undergo a similar reconstitution. It’s fine to fix programs for more experienced teachers and school administrators, but there is abundant evidence that problems in teacher development begin earlier in the pipeline.

Parent-friendly approaches for improving education were the subject of one of the highlight briefings in today’s meeting of the Interim Joint Committee on Education at Northern Kentucky University.

I’ll be talking about the details of some of these plans in future posts, but one quick example is a program for parents to make the most of high school. Useful subjects discussed at this brown bag lunch affair include things parents need to know about college in general and the ACT college entrance test.

In an effort to meet the needs of parents, Boone County hosts events like these with breakfast, lunch and dinner meetings, including weekend meetings, so parents with unusual work schedules can still attend.

Boone County has figured it out – leveraging parents in positive ways is a real low-cost education option with great payback. For one thing, as a briefer pointed out, parents are available without any salary, benefits or health care costs.

Stay tuned on this, as I suspect other districts around Kentucky could benefit from some of the ideas Dr. Tracy covered today. We know that parents in other areas of Kentucky don’t always feel as welcome as what we hear is happening in Boone County.

KACo: right the ship or mothball it?

Conventional wisdom says stopping a tax before it becomes law requires much less effort than getting rid of one enacted. The same holds true for government agencies.

I’ve been talking the past few days about some remarkable information in a new federal study on school district funding across the nation. What makes this study especially unique is that it separately reports fiscal data for the 1,673 school districts around the country where EVERY school is a charter school. Of course, none of those charter districts are found in Kentucky because we don’t have charter schools here.

I overviewed some of the implications in this report over the past few days, but now let’s dig a bit deeper.

The table below presents a state ranking I assembled for the median per pupil revenue by state for regular, non-charter districts in the US. That ranking does include every school district in Kentucky because, again, we don’t officially have charter schools (the Model Lab Schools at EKU and the Gatton School of Science at WKU operate much like charters, but they are not officially charter schools). Note that Kentucky ranks fairly low for per pupil funding, but (at the risk of sounding like a TV ad), wait – there’s more.

Read down near the bottom of the table to see that while Kentucky’s 2006-07 median school district funding is $9,491 per pupil from all sources, local – state – federal, the median charter-school-only district funding elsewhere was considerably lower – only $8,677 per pupil.

In fact, the median charter-school-only district’s revenue is lower than the regular district median revenue in all but five states, and it’s over $2,000 lower than the US wide figure – nearly 20 percent lower.

The table above also shows that the median revenue for regular school districts in 12 states is at least 50 percent higher than the median amount the charter-only districts receive.

Clearly, charters in the federal study are operating at much lower cost than regular districts. That is undoubtedly due at least in part to the charter schools’ release from most of the burdensome, expensive and reform-stifling regulations that regular schools have to obey.

One last note – the anti-charter crowd in Kentucky claims that charter schools won’t work well in our many rural school districts. That may not be true. Apparently, people in other states have thought about this issue and realize that one way to overcome this supposed problem is to convert all the schools in a district into charter schools. That allows the whole district to benefit from the educational flexibility that a charter provides.

Certainly, in the sad cases in Kentucky where entire school districts have failed to make No Child Left Behind goals for years and years, converting the entire district to a charter district might be a very good option for us to pursue.

We hear from states with charter schools that they open the door to real school flexibility. Charters can go out and do what works best for children free from bureaucratic reform-stifling restrictions that seem more focused on protecting adults in the system rather than educating the system’s true customers – the public school students of Kentucky.

I blogged yesterday about a new federal report from the National Center for Education Statistics that contains some surprising new information.

Among other surprises, this report reveals that in some states there are a surprising number of school districts where every school is a charter school. That means every single school in those districts has been freed from most of the burdensome and restrictive school regulations that many experts now believe are standing in the way of real education reform.

There are more interesting revelations in this amazing new document. One of those concerns the funding spread from the lowest to highest funded regular school districts in each state. That statistic is captured in the federal report by a figure of merit called the “Federal Range Ratio.” A small Federal Range Ratio means there is very little difference between bottom-end and top-end funded school districts in a state.

As you can see in this table, which I assembled from Table 1 in the federal report, Kentucky has the smallest Federal Range Ratio for regular school district funding of any state in the nation. In other words, KERA has done a phenomenal job of leveling funding in our schools. The difference is only about 30 percent. No other state does this job better. In over 40 states, the ratio is at least twice as large. 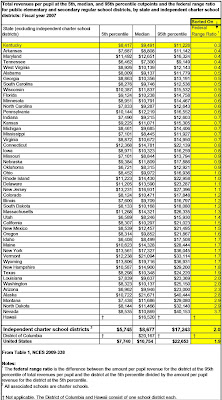 By the way, I’m not done with this report, so stay tuned for more.

Data details for the statistics crowd

Federal statisticians know that in most states some school districts “break the curve” when it comes to funding.

A good example in Kentucky is the Anchorage Independent School District. This very affluent school district charges extremely high local school taxes, far above what most Kentuckians can afford. In addition, the district only operates a Primary to grade 8 school system. Those factors make Anchorage’s state-leading per pupil revenue out of line with the real norms for Kentucky. Anytime a district like Anchorage is included in funding analysis, it “pulls the curve.”

Recognizing this problem, the federal analysis doesn’t look at the very top and very bottom funded districts in each state. Instead, to overcome the problem with “curve pullers,” which statisticians technically label as “outliers,” the new federal report looks at the district where the funding ranks 5 percent above the bottom funded district and at the district that ranks 5 percent below the top funded district. These are called the “5th percentile” and “95th percentile” districts in the report. Statistically speaking, this is a good and uniform approach to use when outliers like Anchorage are present.

After determining the 5th and 95th percentile district funding in each state, the federal report then compares those numbers using the somewhat cryptically titled “Federal Range Ratio.” When you actually look at this statistic, it is just a percentage-like difference between the low-end and top-end funded districts, expressed as a decimal instead of a percentage form.

Again, this is a good approach for such a figure of merit.