What are charter schools, anyway?

School choice options like charter schools are on a lot of policymakers’ minds right now. And, a bill creating parental choice public schools in Kentucky has been prefiled for the next legislative session.

So, you might think it’s time to learn more about school choice. If so, here is a quick-to-view video that will introduce you to what these school innovations – which soon may be coming to Kentucky – are all about.

It is pretty much taken as fact that boys outscore girls on math. That is true with the new National Assessment of Educational Progress (NAEP) math tests, as well. For example, the two bars on the far left of the figure below show that while Kentucky’s fourth grade females had a 34 percent NAEP math proficiency rate, our state’s fourth grade males did notably better with a 39 percent proficiency rate.

But, now take a look at the second group of bars on the right. The first two bars show that on the KCCT math test, female fourth graders were 72 percent proficient while their male counterparts were only 71 percent proficient. 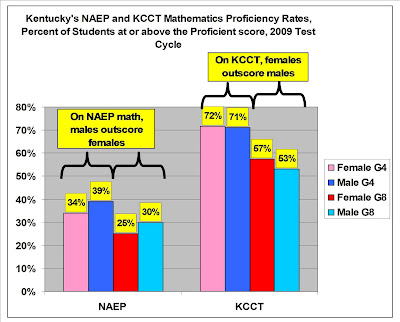 Things are even more dramatic for the eighth grade results. In the NAEP, the boys had a five point advantage, just like boys did in the fourth grade NAEP. But, on the KCCT the girls outshined the boys by four points.

What’s going on with Kentucky’s Tests?

This table adds a bit more information and was used to generate the graph above. 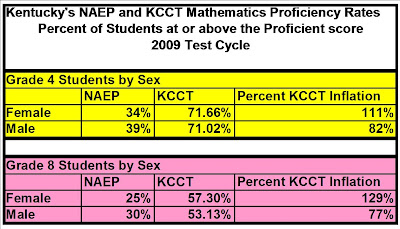 Notice in the far right column that if the NAEP is accurate, then our KCCT proficiency ratings for girls are dramatically more inflated than they are for boys.

As our testing “gurus” work through the revisions to Kentucky’s testing program that will replace the KCCT, they need to keep this sort of bias information in mind. We don’t want a test that gives an unfair advantage to any student group.

The key to making privatization work is the accountability produced by a clear, quality contract.

Such an agreement allowed Indiana Gov. Mitch Daniels to cancel a $1.34 billion contract with IBM Corp. to automate the application process for several supplemental government programs, including food stamps and Medicaid.

The Associated Press reports that Daniels said the company “did not make satisfactory progress to improve services.”

I blogged earlier on how the National Assessment of Educational Progress (NAEP) shows scoring of the Kentucky Core Content Test (KCCT) in math has been inflating over time.

Let’s look at how bad that inflation was in the 2009 math tests. We will see that the errors in reporting the true performance of black students for No Child Left Behind (NCLB) are particularly disturbing. 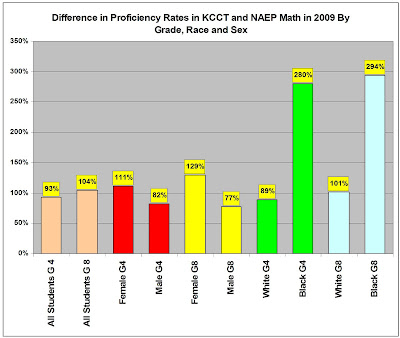 The graph above explores the difference between the 2009 math proficiency rates reported on the KCCT and those reported by the NAEP. I present data for various reporting groupings and grades.

In general, for most of the categories in the graph, the graph shows the KCCT math scores are inflated to about twice the NAEP reported figures. That is a pretty significant error.

However, there is one, very notable, exception.

KCCT math proficiency rates for our black students are hugely inflated in 2009.

KCCT inflation has profound implications for the accuracy of the NCLB ratings for schools in 2009 because the KCCT math test is one of the two academic tests used for NCLB reporting.

It looks like many schools may have avoided NCLB sanctions when they actually should have failed because of this student subgroups’ true performance.

As a consequence, more schools than reported probably should have failed to make adequate yearly progress in NCLB overall.

We showed in an earlier blog that constant inflation in KCCT scores has been the trend for some time. Now, we see that inflation is significant for many student groups, but especially so for Kentucky’s ranking student minority.

Details on the graph

Note that some of the NAEP data used to contruct the graph was assembled using the NAEP Data Explorer Web tool.

One of the values of the federal National Assessment of Educational Progress (NAEP) is that it can be used as a “ruler” to measure scoring inflation over time in state run assessments.

I developed a tool several years ago to make it easy to detect grading inflation on state tests such as the Kentucky Core Content Tests (KCCT). Here at the Bluegrass Institute, we call this the “NAEP Ruler.” The ruler produces a number we call the “NAEP Rigor Ratio,” which simply shows the relative scoring rigor of state tests versus the federal test.

The really important thing, however, is whether a state’s NAEP Rigor Ratio stays constant over time. If the Ratio changes, then the state’s scoring is changing in comparison to the very carefully developed NAEP scores. A changing NAEP Rigor Ratio can indicate serious stability problems in state test scoring.

I used the new 2009 NAEP math results for 2009 to develop the two graphs below. These show the KCCT math test’s “NAEP Rigor Ratio,” as measured by our ruler, have been steady declining in recent years. 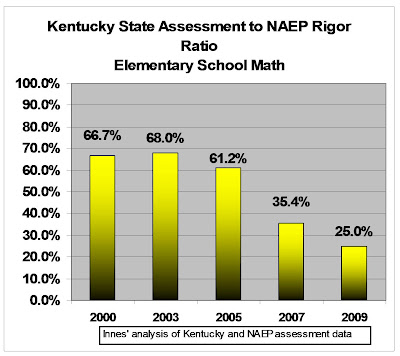 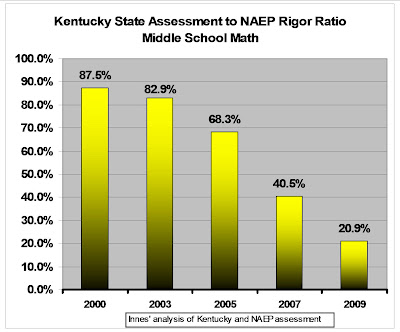 Ideally, the NAEP Rigor Ratio should stay constant from year to year. As you can see, that hasn’t been the case for either elementary or middle school math testing in Kentucky.

This has important consequences for the recent No Child Left Behind results for Kentucky. KCCT math is one of the academic tests used to determine if schools have made adequate yearly progress. If the test is getting easier, which it is, then some schools that supposedly passed NCLB in 2009 possibly should have failed, instead.

You can find a brief description of the NAEP Ruler in the freedomkentucky.org Wiki site.

If you want full details, an expanded paper on the NAEP ruler, “CATS in Decline: Federal Yardstick Reveals Kentucky’s Testing Program Continues to Deteriorate,” is also available through the Wiki site here.

As a note, the 2009 data used for the updated Rigor Ratio calculations came from the Statewide 2009 Interim Performance Report from the Kentucky Department of Education and the 2009 NAEP Report Card.

The earlier data references are contained in the detailed paper noted above.

Color me ‘green,’ leave US alone

Perhaps the fact that reducing greenhouse gases by one-millionth will cost Australia as a whole $50 billion over the next 40 years and each taxpayer $4,550 per year helped turn back a major climate policy in that country.

Or perhaps it’s the fact that Australia looked at Spain, which has been moving toward a “renewable energy economy” and now has 19 percent unemployment while the real cost of power has risen 100 percent.

Or perhaps “no one has any evidence that CO2 will overheat the earth.”

This summary by Leon Ashby, a Centenary Medal recipient for services to the environment, concludes: “an Emissions Trading Scheme (ETS) will never ever prevent climate change,” but will threaten the very foundations of a free economy.

A similar scientifically sound presentation is being developed for the U.S. Some research has already been done on the impact such schemes would have on Kentucky. It’s not a pretty picture.