Kentuckians should be concerned about the latest attempt by the White House to suppress online opposition of its scary health-care plan.

This Reason.TV video offers a frightening report about the White House asking the public to report any information on health care reform they receive from e-mails and blogs that “seems fishy.”

They have essentially asked the public to become watchdogs for the very thing that many do not want to begin with. Notice this video includes the President himself stating he’s “a proponent of a single payer, universal health care program.”

Kentuckians should demand their representatives come home and face the music on this issue – as others have done around the country.

Health-care legislation that will have a tremendous impact on the people in your district is being rushed through Congress.

Since you were sent to Washington to represent the people in Kentucky’s Sixth District, it is vital that you share your knowledge and insight on what this proposed legislation will do for – and to – them and all Kentuckians.

Set aside some time – lots of it – and pick a public place that accomodates hundreds of people. Invite everyone in the district to come and get their questions answered.

Your constituents are hearing too many conflicting sound bites on proposed legislation that mandates massive changes in our health-care system.

We are worried, confused and concerned about both the details and the overall impact this proposed legislation will have. We see this as a new government mandate containing freedom-robbing provisions that will take our money and deny us choices.

It’s time to give we the people a chance to directly — and publicly — address you. We are waiting …

The Citizens of Kentucky’s Sixth District

UncategorizedBy Jim WatersAugust 8, 2009
Not surprisingly, the Louisville Courier-Journal sides with the judge and against Jefferson County Public Schools’ parents and students in the ongoing busing controversy. That’s been the consistent stance of their editorials and op-ed pages all along.

However, I’m just wondering upon what basis the editorial writer of Thursday’s editorial, “Heyburn’s ruling,” makes the following statement about the Jefferson County Public Schools’ old race-based student assignment plan that was struck down by the U.S. Supreme Court last year:

“In fact, the old student assignment plan was popular with Jefferson County families and worked well. It also provided a framework for making this a strong unitary district, with effective support coming from all interested parties.”

With a multitude of parents being forced to put their children on a bus–only to be bused across town just to meet some kind of racial quota–combined with hundreds more being denied transfer requests by the system, I’m just curious what spurred the editorial writer’s assertion that “the old student assignment plan was popular.”

A few days ago, U.S. District Judge John G. Heyburn II made a legal ruling supporting the incredibly poorly thought out Jefferson County school busing plan that we have discussed before.

So, I thought it would be interesting to look at the academic performance of one school where a child will be forced to bus something like 20 miles, one way, each day.

The school is Jefferson County’s Shelby Elementary School. It is in No Child Left Behind Tier 3 status, which means it failed during four separate school terms to meet the requirements of NCLB.

You can find the school’s NCLB report for 2008 by negotiating some menus from this page.

Here is a list from that report on the areas where this low performing school failed NCLB goals in 2008. 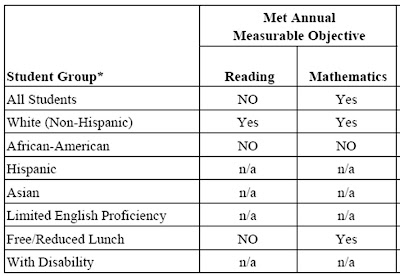 First of all, notice that the school didn’t fail white kids. It didn’t fail because of kids with learning disabilities, either, simply because the school had too few of them under Kentucky’s ridiculously high minimum enrollment requirements to get a score in that area (signified by the n/a designation).

This school primarily failed because of one racial group, African-Americans, which actually comprise the dominant racial group at Shelby Elementary.

If Jefferson county can dilute the number of low-scoring students in this school by busing in kids from better-off parts of the school district, it possibly will boost scores in the school, at least for a little while, without having to make any real changes in educational performance.

The real irony here is that because this school is an NCLB Tier 3 school, parents of students already attending Shelby Elementary get the right to request a transfer out of this school to a better performing one at the same time that the east end students sued to avoid being bused IN to this low performing elementary school.

And, then ask how a judge could miss what is going on here. How could a judge uphold a plan that requires a five-year old to make three bus changes, ranging all across town, to travel all across Jefferson County to school? What kind of educational mindset is that going to create?

Of course, aside from other things, Judge Heyburn doesn’t have a terribly good track record on school busing issues. According to the Daily News in Bowling Green, “Heyburn upheld a school assignment plan in 2004 – a decision struck down by the U.S. Supreme Court by a 5-4 vote in 2007.”

So, stand by for more on this explosive issue that goes to the heart of parent rights to insure their children get a good education. In the case of the two parents who got trampled by the school district, and then the courts, they pulled their kids out of the public school system all together. If they now win their suit on what looks like certain appeal, the damages to us taxpayers will mount that much more.

And, all the while, Shelby Elementary will go on conducting business as usual, which is to say, probably not very well. In fact, if there is a large enough change in the school’s student enrollment thanks to all the busing, that could restart its NCLB “clock.,” giving the school’s staff a “bye” for several more years while education in the school continues to wallow.

Freedom cuts through the fog

The late Milton Friedman’s doctrine of capitalism may not be a perfect system. But no one has come up with anything better.

Does Kentucky spend the right amount on schools?

The Bluegrass Institute and the Friedman Foundation for Educational Choice recently conducted an opinion poll to find out what Kentucky voters – our readers – think about the state’s education system.

I showed you what you think about the schools overall a couple of days ago.

A solid majority of you, 59 percent, think the schools are doing only a poor to fair job, at best.

Now, let’s look at what you told us about school funding. 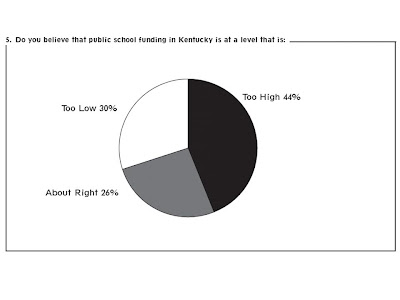 As you can see, an overwhelming portion of you either think we spend enough now (26%) or we spend too much (44%). Less than one in three of you think we need to spend more.

This is something our school bureaucracy, which constantly has its hand out for more dollars, simply must come to grips with. Our school “folk” need to figure out how to do their job more efficiently rather than just continuing to plan on getting a lot more money so they can continue as they have in the past.

The poll indicates you don’t think the past performance of Kentucky’s schools is very good, but you also don’t think more money is the answer.