Read the fine print: There’s more than one way to skin this cat

The fine print in the proposed health care bill reveals that this legislation could be dangerous to our health and economic liberty. Perhaps Washington’s politicians would know that … if they had bothered to read it themselves.

Click here to read the latest column from Jim Waters.

– And, our TEACHERS run the councils!

The new “Leaders and Laggards, A State-by-State Report Card on Education Innovation” report from the US Chamber of Commerce will, as I mentioned earlier, raise some eyebrows.

Here’s one great example that got somewhat hidden in my first post. It bears repeating with emphasis.

After you consider some data in the Chamber’s report, it becomes clear that our School Based Decision Making Councils (SBDM), often called Site-Base Councils, don’t impress Kentucky teachers.

The Chamber cites a federally conducted survey that shows only 31 percent of Kentucky’s teachers like the way our schools are being run. That is less than one teacher in three that thinks their schools are running properly.

That doesn’t even match the national average. 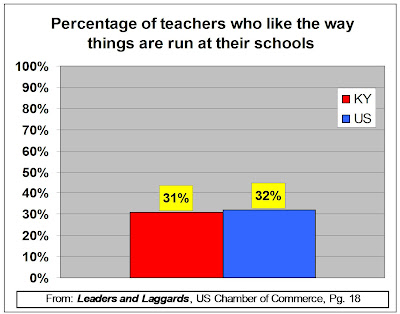 Now, here is the kicker. Our schools are run by the SBDM. Furthermore, by law, teachers form the voting majority on every single SBDM in Kentucky. If our teachers don’t like things, they have the power to change them. But, they clearly are not, or cannot do so.

Thus, the data in the US Chamber’s report leads to a conclusion that the SBDM are not functioning very well, and our own teachers say so.

This insight into the SBDM becomes important as the Race to the Top Fund competition heats up. Kentucky is still trying to argue that SBDM are a suitable replacement for the state’s lack of charter schools.

Well, with an assist from the US Chamber of Commerce, that argument just got shot full of holes – by our own teachers.

The Kentucky Chamber of Commerce recently floated a pretty straight-forward idea – with the economy in trouble and the state facing a serious budget shortfall, state workers should pay a bit more each month for their very generous health care program.

Of course, the unions involved had knee-jerk, negative reactions, but that isn’t the way it played out in the press.

I wasn’t surprised to see the conservatively oriented editors at the Paducah Sun come out in favor of the Chamber’s proposal (subscription).

But I was surprised that the Sun was quickly joined in its favorable opinion by the much more liberally oriented folks at the Messenger-Inquirer (subscription).

The public sector unions are clearly getting out of synch with the rest of the state. They are even getting out of line with other unions in the private sector which, seeing the inevitable, have made all sorts of accommodations in order to preserve at least some of their workers’ jobs. Somehow, taking money out of the dwindling numbers of Ford union members’ pockets and transferring it to a public sector employee’s pocket doesn’t seem to do much towards helping the economy.

The chamber is proposing that public sector workers increase their contribution towards health care by just $50 a month. That doesn’t seem like a lot to ask as a contribution to keep the state, and many of those public sector jobs, afloat in this critical time, especially when, as the Messenger-Inquirer notes, Kentucky state worker average salaries now exceed the average salary for all other occupations in Kentucky by more than $1,000.

Quote of the week

If a nation values anything more than freedom, it will lose its freedom; and the irony of it is that, if it is comfort or money it values more, it will lose that too.
— William Somerset Maugham [1941]

Good news!  We’ve been hard at work collecting check registers in order to shine a light on how money is spent in Kentucky.  This week, many more school district check registers were added to FreedomKentucky.org in the form of PDF documents.  Below is a list of recently added check registers: 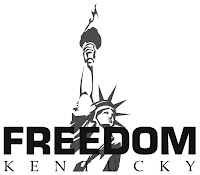 Spend a few minutes looking into the school district where you live or your children go to school.  See how taxpayer money is being spent.  After all, spending transparency is the first step toward accountability.

UncategorizedBy Rick LNovember 12, 2009
Massachusetts’ legislative leaders, including Gov. Deval Patrick and Mayor Thomas M. Menino of Boston, are moving swiftly to pass a charter school bill to better position the Bay State for a chunk of the more than $4 billion in education stimulus funding being offered by the Obama administration to states pursuing innovative changes in their public education systems.

The Massachusetts process has been rife with controversy over funding and the loss of local control, with resistance led by superintendents, school committees and teachers unions.

Oh my, controversy! In Kentucky, that means time for talk, talk, talk and then a multi-year task force. Elected officials certainly can’t rock the comfort boat of special interests.

“I think it’s important to pass the bill not only to qualify for the race-to-the-top funds, but because it is the right thing for our children,’’ said Martha M. Walz, cochairwoman of the Joint Committee on Education. “The bill focuses on two things: closing the achievement gap in those schools and communities where some children are lagging behind, and for communities doing well, it creates a method for them to do even better.’’

Wow, putting kids first! What a novel approach! Kentuckians can’t even get their legislators to muster enough courage to discuss charter schools in an education committee.

As the world passes Kentucky by, at least we can watch real leaders in other states find a way to get the job done and put their children’s education first.