Thanks to our veterans

Today is a day to express appreciation to our nation’s 23.2 million veterans. It’s also a day to remember those who gave the ultimate sacrifice and paid freedom’s highest price.

Without the service provided by those men and women willing to serve in our nation’s armed forces, the security required for a free marketplace to thrive would not be possible.

Libertarians need to show strong support for the armed forces, realizing that those who serve do so by choice and ensure the continuation of the those ideals and principles that make this country strong.

Here are the nation’s veterans … “by the numbers.”

A bullseye on campus housing.

More drama with campus area housing. Circuit Judge Ernesto Scorsone issued an injunction against a Woodland Avenue property owner for operating a house as a lodging house in Lexington. This forced 10 University of Kentucky students out of their home.

Granted, the home was inspected and not up to code.

Question: Where else in the city are private property owners in a single area being targeted for inspection?
Answer: Nowhere.

Is it fair to target property owners in one small area of town and hold them to a set of standards that the city itself cannot/will not meet?

When you aim low, you often hit your own foot

– Jefferson County – you did it to yourself

We have written plenty over the years (such as here and here) about the “lowball” reading performance target the Jefferson County Public School System set for itself several years ago with its “Every1Reads” program.

The district took it upon itself to change the Kentucky Board of Education’s real reading performance target in the CATS assessments to something much lower – apparently just to look better.

Just after his appointment as superintendent in Jefferson County, I took time to personally caution Dr. Sheldon Berman that Every1Reads set deceptive targets that would lead to trouble.

Those cautions didn’t work, and the district’s reading program is now in trouble.

November ninth found the Jefferson County Board of Education wringing its hands over the grim fact that reading performance in the district actually declined in the past few years. The Courier-Journal says the recently released Kentucky Core Content Test results showed, “At every level, student reading skills were slipping backward.”

In a remarkable bit of candor, the school district’s director of literacy told the newspaper, “The way instruction is being delivered now, it’s at a superficial level.”

Just now, we are told, Jefferson County is going to start requiring teachers to track their students’ progress and change strategies if kids are not learning. That’s absurd! This was supposed to have happened from day one of KERA back in 1990.

In fact, tracking student performance is such basic education “stuff” that one has to question who stood idly by in Jefferson County – and in Frankfort, too, for that matter – these past 20 years while these basic education approaches apparently were not being followed.

Well, when you set superficial goals, that sort of thing happens.

But, what is inexcusable is the fact that the “lowball” reading targets in Jefferson County have been obvious since at least 2005. What is it going take to wake our school leaders up?

I can’t help recalling, once again, recent comments from the State Board of Education Chair, Joe Brothers, on October 8, 2009. He was being briefed on more of the “same old, same old” stuff to fix the state’s low education performance. Brothers interrupted, saying,

“I came on the local board (his local board in Elizabethtown) in 1987. What you just said to me is no different than what I heard in 1987. So why should I be hopeful?”

I’ll echo Mr. Brothers’ comment. Jefferson County Board of Education, after you ignored the obvious dangers in your Every1Reads deception for four years, and after you ignored basic education concepts like properly tracking student performance and making adjustments for two decades, why should I now be hopeful that you are going to do better?

Speak out on how your money is spent!

Over the summer The Bluegrass Institute’s FreedomKentucky.org project began an initiative to conduct numerous open records requests to obtain check registers, financial data, and budgets for Kentucky school districts, cities, and state agencies. Those results are slowly being archived in a sortable format so that you can see how your money is being spent! You can find a link to this database on the front page of FreedomKentucky.org listed as “State Spending Database“.

A new feature is available that allows for anyone browsing these databases to leave comments about what they find in these check registers! Find a questionable expense? Leave a comment about it, help raise awareness about how taxpayer money is being spent in Kentucky.

Browse the database to find your school district, city, or a state agency you are interested in!

“75 percent of young people ages 17 to 24 are unable to enlist in the military because they fail to graduate high school, have a criminal record, or are physically unfit. In Kentucky, that would mean over 300,000 young adults cannot join. However, that may be a low estimate because, compared to the national average, Kentucky has more young people who are overweight, (37% vs. 32%).”

The group has some interesting political overtones (at least one of the generals involved became highly political following military retirement), but the magnitude of the statistics this group quotes are truly incredible none-the-less.

The Mission Readiness statistics are supposedly based a non-political survey performed for the U.S. Army Center for Accessions Research by the Lewin Group in 2005. I have not been able to find the actual report on the Web, but several US Army Power Points indicate the 75 percent figure could be open to some interpretation if waivers were authorized. But, even so, the number of unqualified young adults is truly sobering.

By the way, the Mission Readiness crowd says the ‘fix’ for this is early learning programs for four year olds, conveniently dovetailing with a current effort in Congress to increase funding for those programs. We’ve been doing Pre-K for our poorest kids in Kentucky since KERA was enacted. That wasn’t long enough to have much impact on the 2005 study, but it will be interesting to see what happens as more kids from that group enter the 17 to 24 age group.

News about private schools you can use

Note that you can do more limited searches or just enter Kentucky and leave all the other fields blank to see the full listing of private schools. If you are looking for a school for your child, you can do a county by county or city by city search. They also allow searches by religious affiliation among other things.

Find the Washington Post’s article with information about other databases, including a link that allows you to locate non-profit organizations that apparently fund tuition to private schools, here.

The Post says the IES site captures about 90% of the nation’s private schools, but there is no indication if the same figure holds for Kentucky coverage. Still, this could be a valuable tool for our readers.

Here is a sample of the data from the Bath County Christian School, which is in a rural area of the state. So, even parents in rural areas may find school choice options in this database (click on graphic to enlarge). 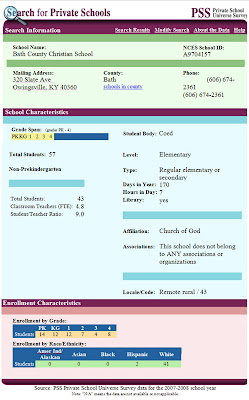