On September 28, 2009 we informed you here and here that there appeared to be problems in the new No Child Left Behind scores for 2009.

Official confirmation of the dimensions of the problem were provided during the Kentucky Board of Education meeting on October 8, 2009.

I learned a little more during yesterday’s Education Assessment and Accountability Review Subcommittee meeting. About 120 schools appear to have questionable data concerning students with learning disabilities and the Kentucky Department of Education (KDE) sent messages to all of those schools requesting a review of the statistics currently in the department’s databases, including the data used for NCLB scoring.

The question of exactly what happened remains unanswered. The problems seem to be entirely random at this point, unrelated to such things as when each school changed over to the Infinite Campus student tracking computer system.

That random problem situation could indicate issues for the stability of Infinite Campus.

Back in May, we reported on an issue impacting the Henry County School District where they were getting unstable answers every time they tried to retrieve their Average Daily Attendance (ADA) figure from Infinite Campus.

Those ADA numbers are critical because they are used with several formulas to determine the amount of state and federal money each school district receives each year. I estimated the errors could lead to this small district getting inaccurate payments of as much as half a million dollars.

Anyway, it looks like the KDE data hounds are on the issue and asking the right kinds of questions. It will be interesting to see how their hunt turns out.

Politicians and unions: A sign of what’s to come

So what? That’s Illinois. But the Employee Free Choice Act (card check) in Congress would open the doors to what could happen next in Kentucky — without the executive order.
This is what happened in Illinois without the Employee Free Choice Act. First, the executive order.
Next, the endorsement with its unmistakable display of political power. This is where a politician-plus-unions formula trumps citizens’ freedoms:
[youtube=http://www.youtube.com/watch?v=TnX6RR_aVwU]
News flash! About 90 percent of hard-working Kentucky men and women do not belong to a union and, as such, are not forced to pay union dues.
This resurgence of a display by labor bosses of Chicago-style political power means ordinary citizens are now fighting for their freedom of choice – against well-funded union organizations and their political enablers in the governor’s office.
http://www.myfoxchicago.com/video/videoplayer.swf
Freedoms erode so quickly. Will Kentucky’s politicians drive union organizers to the doorsteps of unsuspecting Kentuckians?

There has been a lot of discussion this year about the lack of progress in Kentucky’s public schools, especially in the most chronically low-performing schools. After attending both Kentucky Board of Education and several legislative committees in the past week, it is my informed opinion that most of our key education policy makers are reaching consensus – what our educators have been doing isn’t working well enough, or fast enough, and people are now open to making major changes.

For example, during last week’s board of education discussion of Louisville’s chronically low performing schools, Joe Brothers, the chair of the Kentucky Board of Education, laid it out plain and simple, saying we have to “face the brutal truth.”

The next day, Brothers provided more evidence of his frustration. As department of education staffers were laying out plans to fix the problems, Brothers impatiently interrupted, saying, “I came on the local board in 1987. What you just said to me is no different than what I heard in 1987. So why should I be hopeful?”

Clearly, Mr. Brothers is ready for something really new.

Our new Commissioner of Education Terry Holliday has quickly grasped the seriousness of the problem. He publicly commented at the board meeting that he has an open mind about change, as well. He freely suggested concepts like charter schools and KIPP Academies could be a way to reform some of the state’s chronic problem schools.

He told the legislators, “We’re not closing gaps fast enough. We’re not moving our students to proficiency as fast as we need to do so. So, our issue is, what are we going to do differently in the future?”

Ken Draut, Kentucky’s Associate Commissioner for Assessment, also admitted to the EAARS members that the state simply isn’t moving fast enough. During his briefing on last year’s test results, Draut, who has a great deal of responsibility for the state’s testing programs, pointed out that the rate of progress on the Kentucky Core Content Tests for reading and math is much slower than the rates that will be required over the next few years under No Child Left Behind.

Legislators are getting the message.

The EAARS co-chair, State Representative Kent Stevens, commented that, “We can’t be afraid to make a major change, because, obviously, what we’ve been doing for the past few years – it isn’t working anymore.”

And, even an old war horse defender of KERA, State Representative Harry Moberly, is clearly running out of patience. He said, “When you look at our scores, it’s sort of the same old song.” He pointed out that scores drop off from elementary schools to middle schools, and then the high schools, “get sort of pathetic.” He continued, “We were seeing these same things last year, and the year before, as I recall.”

Moberly also said, “I notice the disability category, once again, is making no progress, which has been the case for as many years as I can remember.”

Moberly continued, “Let’s don’t be afraid to be innovative.” He then mentioned “the charter school thing” in a way that indicated he is open to considering them as one of those innovations to fix our most chronically low performing schools.

So, from key executive branch people to key legislators, it looks like a consensus is forming – we cannot afford to continue with the “same old, same old” ideas any longer. They are not working where it counts – for our kids.

The good: It’s encouraging that Lexington was recently ranked as the sixth best mid-size city for new business startups by CNNMoney.com. However, it certainly does not mean there isn’t room for improvement of the business climate in the Bluegrass. Read more here.

The bad: Lexington has recently been in the midst of a heated debate about student housing near the university. The city council is discussing a housing density ordinance that would keep students from living in certain areas around campus. Students protested this proposal at a recent city council meeting. A recent press release stated that Mayor Jim Newberry dispatched inspectors in an effort involving “inspectors moving down selected streets and identifying properties that appeared to be congregate living facilities”.

Before the city targets selected private property, perhaps it should have its inspectors take a look at its own government owned property. There are many documented cases of neglect for property codes at the Code Enforcement building on FreedomKentucky.org.

You know what they say about people in glass houses…

Over at the Prichard Committee for Academic Excellence’s blog, they just posted an item titled “How weak is Jefferson County?” which points out that this school district, by far Kentucky’s largest, ranks low for elementary and middle school test scores compared to other school districts in the state.

That is generally right on target.

Then, Prichard goes a bit astray, saying that the Jefferson County’s high schools do “importantly better.”

To show why this is important, I did a quick look in Education Week’s graduation rate Web tool.

[Side Note: Ed Week uses one of the better graduation rate calculations for its reporting. Forget Kentucky’s official rates, as they are inaccurate and have been officially audited and found in error]

Per Ed Week, the statewide average graduation rate in Kentucky in 2006 was 72.0 percent. In Jefferson County, it was far lower at 63.9 percent.

Even worse, as we pointed out a year ago in our “How Whites and Blacks Perform In Jefferson County Public Schools,” graduation rates in the inner city schools in Jefferson County are truly deplorable, with some schools losing more than half of their students.

If you drop a lot of kids out, it isn’t hard to look better on tests that are mostly given after the majority of the dropouts have left.

But, those scores are deceptive. They are even good enough to fool the Prichard Committee.

The US education crisis

If any members of the Kentucky legislature’s Interim Joint Education Committee doubt the country faces serious education problems, they kept those doubts to themselves today as Dr. William E. Kirwan presented stunning evidence of how far the United States has fallen in education worldwide.

Kirwan’s evidence was stark – the US has lost significant ground in the education race compared to other industrialized nations. Once in first place, the country is sliding down the ranking scale at an alarming rate.

Some of the bad news is found on this slide from Dr. Kirwan’s presentation. The slide pretty much speaks for itself. 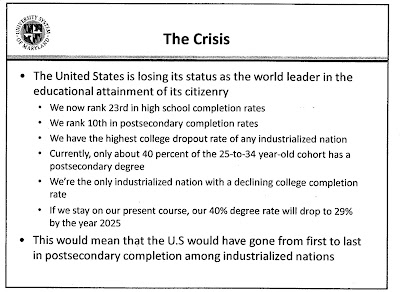 Kirwan, who is the Chancellor of the University System of Maryland, also chairs the College Board’s Commission on Access, Admissions and Success in Higher Education. The commission was formed to examine demographic, socioeconomic, public policy, and education trends that affect college access and success.

Kirwan’s presentation backed up a number of things the Bluegrass Institute has been pointing out for some time. High school graduation rate issues are no surprise to our readers. We have also written a lot about how poor preparation in Kentucky’s high schools leads to high levels of college remediation, excessive college costs and excessive college dropouts, as well.

Kirwan mentioned a relatively new report, “Coming to Our Senses,” which his group created. Some bullet points on that report’s major conclusions include: 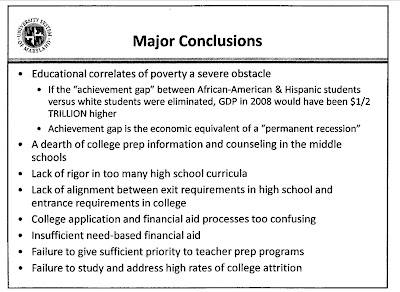 Kirwan offered a number of suggestions to stop this downhill slide. Some of those include

• Increased college prep counseling in middle schools – many kids still don’t know about options for college, what is required, and what financial help is available
• Making college preparation the default high school curriculum – our Senate Bill 1, which Kirwan praised at several points in his presentation, will do that
• Align high school requirements with incoming college requirements – again something in Senate Bill 1
• Simplify college admissions and financial aid processes, and make college more affordable
• Simplify the college transfer process from two-year to four-year schools, including preserving credits for courses taken in two-year programs
• Give a lot more priority to teacher preparation programs – Kirwan honestly admitted that colleges are at fault in this area and need to improve
• Implement strategies to improve college retention – so those who enter complete their degree program.

We are glad Dr. Kirwan came to Kentucky, and we are also pleased that our legislators are attuned to the issues presented and generally seem to grasp the many problems discussed. It looks like we have moved beyond the climate of denial when people like Dr. Kirwan were summarily dismissed rather than listened too, which too often marked the early years of KERA.