“Teacher evaluation in this country is fundamentally broken”

– US Secretary of Education Arne Duncan

Secretary Duncan continues, “…teacher evaluation is divorced largely from student progress, student success, how do you defend that?”

Here in Kentucky no teacher has ever lost a license due to fundamental inability to teach. Not one. Unless they commit a crime, it is impossible to get rid of teachers who simply don’t do the job.

Education Week also points out that, “…the administration still places a major value on merit pay, saying that the federal Teacher Incentive Fund, which gives grants to school districts for performance-pay programs, was ‘the best thing the previous administration’ did.”

I don’t think any of that money worked its way to Kentucky, because our union-dominated public school system doesn’t have merit pay programs.

It remains to be seen if pressure from Washington will finally trump the teachers’ union’s lock on Kentucky schools, but it certainly looks like Secretary Duncan intends to try.

In October 2009, Bluegrass Institute founder Chris Derry traveled to Singapore to speak about the concepts of transparency and accountability at the Pacific Rim Policy Exchange.  The Institute’s own transparency website, FreedomKentucky.org, was used as an example!  You can watch the presentation below.

What happens when you have a disfunctional education financial accounting system

I wrote yesterday about the interesting bait and switch of earmarked dollars at the Phelps High School.

Now, the Lexington Herald-Leader is asking questions, as well.

What happens when you have a disfunctional education financial accounting system

WAVE 3 TV in Louisville reports that about $60,000 of a $120,000 included in the state budget to enhance academics at Phelps High School (Pike County) actually ended up in the athletics department.

Apparently, still other funds could not be accounted for.

We’ve written plenty about the very poor MUNIS education financial accounting system in this state (here, for example, and here).

You get the nonsense in Phelps when people think the accounting is so loose that no-one will ever figure out how funds are really being spent.

Phil Moffett, a member of the Bluegrass Institute Board of Directors, will discuss public charter schools on the KY Grassroots Radio Show at 7 p.m. on Thursday. Listen to the live stream at http://www.blogtalkradio.com/ky-grassroots-radio.

More on the Every1Reads deception in Jefferson County Schools

Jim Waters just posted an excellent commentary on the deceptive reading test results that the Jefferson County Public School system has been handing out through the Every1Reads program.

Jefferson County turned true reading scores from the Kentucky Core Content Tests (KCCT) part of the state’s CATS assessments on their ear. Instead, Jefferson County invented its own scoring system, saying that any student who scored anywhere above “Novice” on the KCCT was reading “At or Above Grade Level.”

Let’s explore what the real reading performance in Jefferson County looks like. We’ll look at claims from the Every1Reads Web site and compare them to proficiency rates for the district and the entire state on the KCCT. We’ll also make a comparison to the far more credible National Assessment of Educational Progress (NAEP) reading results for Kentucky. 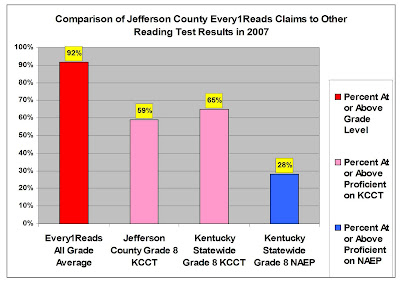 The red bar shows that Every1Reads claimed on average that 91.5% (rounded in the figure) of all tested students in Jefferson County scored “At or Above Grade Level” for reading (see the Every1Reads Web site for this number).

Those tested grades included three to eight plus grade 10.

While Every1Reads didn’t report a by-grade breakout, I calculated the eighth grade percent of students in Jefferson County who scored above Novice from the district’s Kentucky Performance Report for 2007.

The eighth grade percentage of students who scored above Novice was also 92 percent, equaling the overall average for all grades as shown in the figure.

Now, let’s see how Jefferson County really did against the real state standards, which do not have anything in them about “At or Above Grade Level” performance.

But, let’s really put this in perspective.

We know that the KCCT is an inflated assessment. That is one reason why the legislature shut down CATS and is requiring the KCCT to be revised once new state standards are in place.

How inflated is the KCCT? Look at the last bar in the graph.

On the 2007 National Assessment of Educational Progress (NAEP), only 28 percent of Kentucky’s eighth grade students scored Proficient or Above. That’s all. Thus, eighth grade reading proficiency rates reported by the KCCT in 2007 are more than double those from a more credible test.

And, while there are no NAEP scores for Jefferson County, don’t forget that the district does have a lower KCCT reading proficiency rate than the overall state rate.

Draw your own conclusions about the real reading proficiency rate in Jefferson County.

It’s possible to do a similar sort of analysis using the ACT EXPLORE test results for the eighth grade. If you want to see that, make a comment and I’ll add this additional evidence that Every1Reads is seriously misleading Louisville about the performance of its school system.