Check out education researcher Jay Greene’s map showing California — where the charter-school movement started about 20 years ago — with more than 800 charter schools operating during the 2009-10 school year.

Is the school scoring deception expanding?

I have written on several occasions (such as here) about deceptive test score reporting practices in the Jefferson County school system.

For several years, Jefferson County has turned the CATS Kentucky Core Content Test results on their ear, claiming that any child who scores above the “Novice” level is doing “At or Above Grade Level” work.

That is absolutely untrue.

Now, the deception may be expanding.

In response to yesterday’s blog about “Would you call this “Substantial” progress?” an anonymous commentator claimed the National Assessment of Educational Progress also reports scores in an “At or Above Grade Level” format.

That is absolutely untrue, as well.

The anonymous commentator cited supposed “At or Above Grade Level” NAEP results that exactly matched the percentage of students who scored at or above the NAEP “Basic” level. While NAEP “Basic” is not tied to CATS “Apprentice” scores in any way, the logical deception used by the Anonymous commentator is chillingly similar to the one Louisville’s schools have been using with the CATS scores.

Now, here is a possible key to all this.

As I also recently reported here and here, Jefferson County Public Schools participated as a separate entity in the recent 2009 NAEP Trial Urban District Assessment in Mathematics. The NAEP Proficiency rates were quite low, disastrously so for blacks, who only had a seven percent proficiency rate in eighth grade. So, it’s no wonder some in the Louisville school bureaucracy would like to confuse the truth.

Is the Louisville system now trying to redefine the NAEP down just as they did with the CATS results so people in Kentucky’s biggest city will be confused about how bad the performance there really is?

Quote of the day: Try this on, Frankfort

“Pardon my skepticism, but — try as I might — I can’t see any reason why it’s always necessary to raise taxes and fees whenever the government is faced with a budget shortfall. Given the size of budgets these days, especially at the state and county levels, it’s hard to understand why legislators invariably look for ways to increase taxes and generally resist cutting costs until they are forced to do so.” Harris R. Sherline, Opinionfest.com

Would you call this “Substantial” progress?

Over at the Prichard Committee’s blog, they are waxing ecstatic about a new report that Prichard head Bob Sexton and Prichard number cruncher Susan Weston just released called, “Substantial and Yet Not Sufficient: Kentucky’s Effort to Build Proficiency for Each and Every Child.”

I think they only got the title half right.

This graph shows the latest available eighth grade results for Kentucky from the National Assessment of Educational Progress. 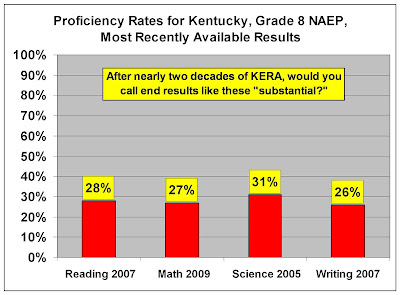 After almost two decades of KERA, I don’t see how anyone can be very happy about the fact that less than one in three of our eighth grade kids is proficient in any of these subjects, while in the critical areas of reading, writing and “rithmetic,” the proportion is closer to only one in four students.

Even if we had started at zero back in 1990 (and we didn’t start that low), the proficiency rate growth is so slow that we are decades away from seeing rates that I would call “substantial” in Kentucky’s NAEP results.

Not sufficient – You Bet!

Government and the gallows: History repeats itself, again

Will the costly — and often radical — agendas planned for taxpayers wind up being the downfall of the politicians who planned them?

The North Lawndale College Prep Academy in Chicago is another public charter school. Its enrollment is also heavily inner city.

But, the school graduates 90 percent of its students, and those who graduate go on to college.

We recently looked at some inner city Louisville regular public high schools with graduation rates only around half that number.

Wouldn’t it be great if Kentucky allowed charter schools so kids in our state could catch the fire of high expectations that you will see in this video from North Lawndale?

You know, poverty wasn’t ‘invented’ in Kentucky. Neither was the bigotry of low expectations for students.

But we have both problems in too many Kentucky schools today.

But, they provide a workable answer to the first two problems.

Isn’t it time for us to move beyond our short-sighted “not invented here” syndrome and establish public charter schools that can fight poverty and low expectations?