The Kentucky Board of Education just made a key decision — adopting regulation changes for the interim assessment process that will be used while the state rebuilds from our now discarded CATS program. As part of that interim change, the board made an especially important and commendable decision.

Kentucky will move as quickly as possible to more accurate graduation rate reporting using the federally researched Average Freshman Graduation Rate (AFGR) formula, which I’ve extensively discussed (such as here and here) in this blog.

Moving Kentucky to better graduation rate reporting has long been a goal of the Bluegrass Institute. We are pleased that this better formula for estimating graduation rates will be used for the class of 2010. We will also see fully disaggregated data by race from the new calculations for the first time, as well. Up until now, that information has only covered statewide totals.

Actual results from the improved calculation will be made public beginning in 2011 because all the data required to compute the AFGR cannot be gathered until some time after the class leaves school.

In the longer term, the state will move to a highly accurate graduation rate calculation around 2013. This will track each individual student in the system so that no longer will any kids “drop through the cracks.”

As a consequence of the increased accuracy, the department of education briefers at today’s meeting admitted that high school graduation rates from the AFGR calculation will be lower than those reported by Kentucky’s current, inflated and heavily criticized calculation. Based on experience in other states like Oregon that already moved to high quality student tracking for graduation rate reporting, the AFGR rates will also probably prove somewhat too high once the high quality data starts to appear after 2013.

No one knows for certain, but the experience in some other states indicates our true graduation rate could be as much as 10 points lower than the 84 percent rates currently being reported. That is a significant difference that would amount to somewhere around 50 percent more kids being lost than is admitted by the current calculation.

UncategorizedBy Rick LDecember 10, 2009
Kentucky already has borrowed $474 million from the federal government for unemployment costs; that total could grow to $1 billion.

Gov. Beshear’s task force on the issue, which has been meeting since April, is divided on what to do — not surprising since government, union and business agendas have significant conflicting priorities.

How much more mandated costs can state lawmakers and the federal government throw at Kentucky’s businesses before the only business option is to put many more people into unemployment lines?

While anyone can rationalize a single incremental cost increase, the cumulative impact of a multitude of such costs reduces incentives for employers to create jobs. Kentucky must change — from being hostile to business to creating an atmosphere that attracts new companies, creates more jobs and lowers our record-high jobless rates.

Answering this question is key to getting unemployment costs under control.

Before the governor’s task force splits the baby in negotiations, remember: only business provides jobs. Government and unions are only good for adding mountains of cost and layers of bureaucracy.

Who is excited about KIPP charter schools?

No Virginia, the excitement about high performing charter schools isn’t just in the minds of the Bluegrass Institute.

Check out this video report from MSNBC.

Visit msnbc.com for breaking news, world news, and news about the economy

It sure is a shame our kids can’t enjoy this kind of education that can only come when a state has charter school legislation. Why don’t you ask your legislator why that is?

What kind of educator runs a charter school?

Educators who want to be principals in the top performing Knowledge is Power Program (KIPP) charter schools don’t just walk in the door and get hired.

In fact, if they don’t already have lots of experience, they first go through a special training program as Miles Family Fellows. Then, the Miles Family Fellows grads and other, more experienced applicants have to do an additional preparatory year in the Fisher Fellows program before they can take the reins of a KIPP charter school.

With all of that required preparation, what kinds of applicants are willing to go through all these requirements to run a KIPP school?

Take a look at the qualifications of last year’s group of 11 in the Miles Family Fellows training group.

There are several Teach for America “graduates” plus college credentials from places like UCLA and Ivy League schools like Harvard, the University of Pennsylvania and Columbia.

The Fisher Fellows program group is also loaded with educators from top-notch schools.

Why do these highly motivated people put up with all the training? They know that the KIPP schools are doing dramatic things in places like inner-city New York. They also know they will have a chance to really make a difference for kids without being stifled by all the red tape that tends to smother principals in regular public schools.

Sadly, Kentucky can’t attract any of these sorts of innovative educators. We don’t have charter schools where such dynamic leaders can really spread their wings.

Ask your legislators why Kentucky children are losing out while kids in high needs areas of more progressive states like New York and Texas get a chance to enroll in schools where the leaders have top notch backgrounds plus extensive preparation to be a school leader in a KIPP charter school?

The independent Congressional Budget Office estimates premiums to most Kentucky families will go up. Yet the bill is being sold by supporters as reducing premiums for families. Which is it?

Sen. McConnell, R-Kentucky, states a provision in the bill will cut $500 billion in Medicare coverage for seniors. Yet President Obama pledges: If you like the coverage you have, you can keep it. Which is it?

McConnell’s statement is clear and on the record. What’s needed in response: a clear statement from Obama’s crowd, including Kentucky Reps. John Yarmuth, D-Louisville, and Ben Chandler, D-Lexington, that not only can we keep our current coverage, but also that premiums will be lowered — for the health insurance plan we choose. 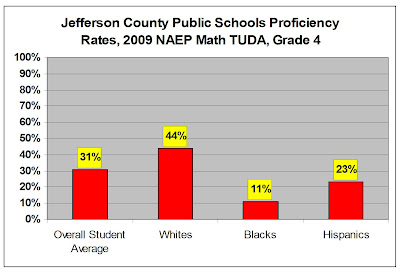 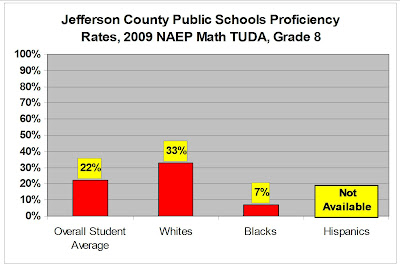 As you can see, in 2009 the NAEP said that overall only around one in three of the district’s fourth grade students and barely more than one in five of Louisville’s eighth grade students were proficient in math.

That overall situation is certainly disappointing, but for blacks in Louisville, the situation is positively grim, especially in eighth grade.

In eighth grade, only about one in fifteen black students in Jefferson County is getting well prepared in math according to the NAEP scores.

By the way, I think those NAEP proficiency rates really do mean something. The NAEP eighth grade math proficiency rate for Kentucky agrees very closely with the percentage of our students who score at or above the ACT EXPLORE test’s “Benchmark Scores.” Those Benchmark Scores are linked to reasonable preparation for college, as I discussed back in April.

I bring this up now because some educators make excuses that the NAEP proficiency levels are set too high. Those excuses come because the NAEP results don’t paint a very nice picture of our school performance. Now that Louisville has its own set of NAEP scores, I expect those sorts of comments will pop up there, too.

Before you accept that educator excuse, consider this. Most of us understand the new economy means kids need to have preparation for postsecondary education of some sort or another. So, I would argue that the close agreement between the NAEP proficiency standard and the EXPLORE Benchmark Score standard – which I repeat is related to real student performance in a typical US college – indicates that the NAEP proficiency level has very significant meaning.

The bottom line: NAEP proficiency is probably the target we need our schools to shoot for, even if they have a very long way to go to reach it.