A couple of days ago I pointed out the explosive growth in enrollment in charter schools in Texas shown on this Texas Policy Foundation graph. 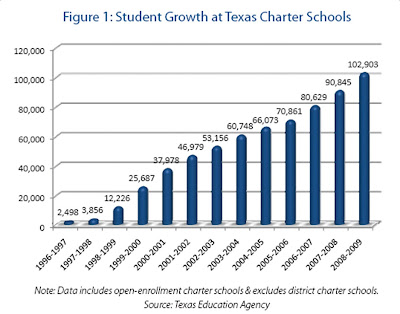 Because the rise in charter enrollment was so dramatic, I was curious about what might have happened to Texas on the National Assessment of Educational Progress (NAEP) after charters were introduced. Was there any indication that charters impeded or helped? I focused on eighth grade math because this is one of Kentucky’s major educational stumbling blocks, especially for our minority students.

What I found is remarkable.

This graph shows how blacks in Texas and Kentucky (which still has no charter schools) did on the federal NAEP tests. Keep in mind that Texas’ charter school growth began after the 1996 NAEP was administered. 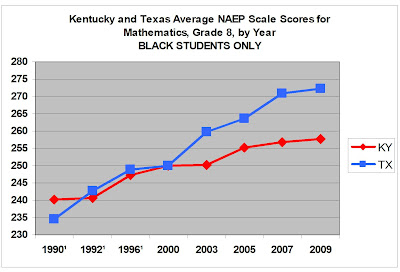 Back in 1990 when the first state level NAEP math test was conducted, Texas’ blacks scored 234 while our black kids scored 240. Note that Texas’ blacks then essentially caught up to our kids and stayed even with them until a couple of years after the Texas charter movement started. After the year 2000, however, Texas’ blacks left our’s in the dust. As of the new results for 2009, which were just released a short time ago, Texas’ blacks scored a dramatic 14 NAEP Scale Score points higher than our kids.

Basically, when it comes to the only racial minority present in Kentucky in significant numbers, KERA got shellacked by Texas’ education system.

Also, to reiterate, note that the difference in performance began to appear several years after Texas started its charter program.

Unfortunately, the NAEP data can’t tell us how blacks in charter schools in Texas performed over time. The NAEP samples from the charter schools were too small to provide statistically reliable information.

All we can tell from the NAEP is that the overall performance for all students in charters in Texas lagged the statewide average for all Texas students in 2005, 2007 and 2009 NAEP assessments but that Texas’ charters reduced that lag by two points in that time.

What we do know is that something dramatic is happening for blacks in Texas, something far better than Kentucky has offered its blacks. And, we do know that the timing of the increase in charter school enrollment in Texas fits nicely with the possibility that charter schools have played a role, maybe a major role, in making this happen.

Prichard brings board of education chair’s frustration to mind

Over at the Prichard Committee’s blog, they’ve been writing a lot lately about improving teaching as the key to improving education in Kentucky.

But, somehow, Prichard’s ideas mostly just bring to mind a most insightful comment that Kentucky Board of Education Chair Joe Brothers made back in October. Reacting to some rather similar suggestions on how to fix our education problems, Brothers said,

(Comment made at the October 8, 2009 Kentucky Board of Education Meeting in Frankfort, Kentucky. An audiovisual recording of this meeting is on line).

To be clear, I agree with Prichard – teaching is an important key.

It’s how we can effectively make that happen that is at issue.

We still mostly see less than one out of three Kentucky students testing at or above proficiency in math, reading, writing and science on federal NAEP tests. In middle schools, some of those proficiency rates run closer to only one in four.

So, it’s clear, after 20 years, that Kentucky’s education community needs a kick in the pants to get true reform going. Joe Brothers is beginning to get that. He also gets the fact that the “same old, same old” isn’t getting the job done.

Prichard has been saying much the same thing for 20 years. And, while Prichard certainly has some basic ideas right, too many of our teachers still are not listening.

Given the constraints and protectionism built into our current education system, there is little reason, as Brothers put it, to “be hopeful” that things will now change if we continue doing mostly the same old stuff.

That is why we encourage Kentucky to adopt approaches that create competition within the education world. Competition spurs innovation and improvement far more rapidly and effectively than bureaucratic tinkering ever has. We owe it to our kids to do more than just rehash ideas that have a 20-year track record as non-starters. We need to offer students choices that will create competition that will in turn spur teachers to earnestly seek out better ways of doing their jobs.

“It is mothers and fathers – not any politicians – who have the greatest interest in the welfare of their children and who know their children best. As long as funding for schools is independent of parents’ choices of which schools to send their children, and as long as government owns and operates schools, government schools will respond less to the needs of children and more to the interests of the government-salaried bureaucrats who run each school as the monopoly that it is.” -Donald J. Boudreaux, George Mason University economics professor

The door to a decent life

Melanie Barrett and Kathy Hancock get it in Christian County.

So does the Kentucky New Era in Hopkinsville.

Barrett and Hancock are “Opening Doors” (subscription) to a better life for young adults ages 18 to 21 who dropped out of school. Their Academy of Continuing Education (ACE) allows these recent dropouts to complete their education with a full high school diploma rather than the far less rigorous GED.

Why is a high school education and the related diploma better?

One reason, as the New Era points out, is that savvy employers know the difference. A high school diploma provides a definite hiring edge.

One example cited in the newspaper: “Rarely do military units accept someone without a high school diploma.”

The reason is simple. The US military knows that people with high school diplomas are far more likely to successfully complete their first enlistment. Given the growing expense to train each soldier, sailor or airman to function and fight in today’s complex military environment, those first-term losses are just too expensive.

Since its inception, the Bluegrass Institute has pointed out the same facts about the GED versus a full high school education, and we’ve made it very clear that Kentucky’s unacceptably high public school dropout rates cost the state more than we can bear.

The Hopkinsville academy also highlights something else. Our ‘One Size Must Fit All’ public school system isn’t meeting the needs of many kids. Now, the ACE program in Hopkinsville is introducing a different approach for kids with different needs who CHOOSE to go to a different type of school.

So, why does the public school establishment – which doesn’t meet the needs of these kids and which continues to suffer a dropout rate so high that it never honestly determined what that rate is – continue to fight real school choices for Kentucky’s children?

Charter schools not part of Ky.’s Race to Top

On December 23, 2009 the Herald-Leader reported under the title above that Kentucky’s application for ‘Race To The Top’ funding from the federal government would not include the introduction of charter schools in Kentucky.

We see several problems with the article.

We have two public opinion polls that say different. One was conducted for the Bluegrass Institute by staff at Western Kentucky University. Another was recently conducted by the Friedman Foundation with support from the Bluegrass Institute. Both surveys found that Kentuckians definitely want more parent choice and that there is interest in charter schools here.

“Charter schools are a form of school choice in which schools are run by the principal, teachers and parents without the regulation of teachers unions and state education departments. Do you feel charter schools would be good for Kentucky education?” Here’s how Kentuckians responded: 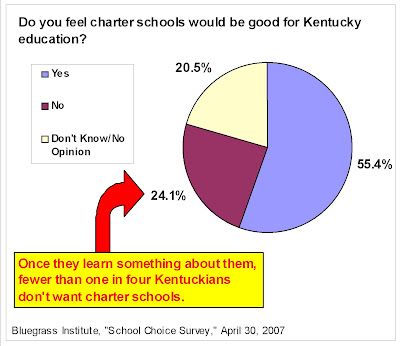 I guess Commissioner Holliday isn’t reading us as carefully as he needs to. If he can come up with some scientifically conducted surveys to counter ours, we’d love to see them.

We contacted the Herald-Leader before Christmas with a request to correct the error. When I checked a few minutes ago, the original error remained in the web version.

At this point, both a correction and an in print and on line apology would be appreciated.

I hope the newspaper did a better job getting the rest of the article correct.

The Texas Public Policy Foundation reports that there has been huge growth in charter school enrollment in Texas.

Meanwhile, Kentucky’s kids can’t get into a charter school because they are not legal here. Ask your legislator why Kentuckians can’t enjoy this high performance educational choice – one that minorities especially find beneficial – while over 100,000 kids down in Texas can.