“Medicare was 10 times more expensive than first forecast and a part of Medicaid cost 17 times more than taxpayers were led to believe. No wonder the American people do not trust Congress and its supposed forecasting experts.”

Andrew Quinlan, president, Center for Freedom and Prosperity Foundation, in a new report claiming government-run health care will be “a fiscal train wreck.”

UncategorizedBy Jim WatersNovember 16, 2009
A recent article in the Lexington Herald-Leader reports that another cigarette tax being passed in the upcoming Kentucky General Assembly is not likely.  The idea apparently has been tossed around in light of the $161 million shortfall for the current fiscal year.  Avoiding another tobacco tax is a good thing.
Why, you ask?  Because Kentucky doesn’t have a revenue problem.  Kentucky has a spending problem.
Here are a few suggestions to trim state spending: 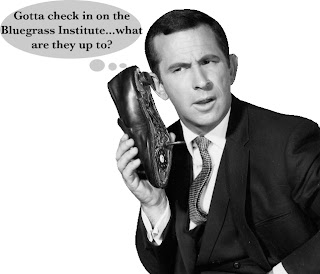 So, state government, since you’re reading this, please put your intelligence gathering to good use and take notes on the above suggestions.

How NOT to improve our schools

– NOT backing up success

Rules for the ‘Race to the Top’ federal education fund are out, and as the first figure shows, there are big points in this state-versus-state competition for states that do things to create and nurture great education leaders. 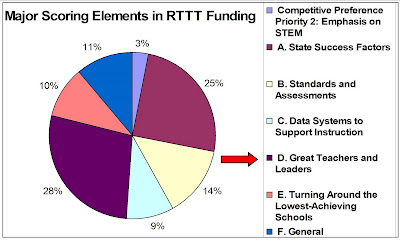 Thus, the story I’m about to tell should upset many here, and maybe a few in Washington, as well. It’s a story about how Kentucky did nothing to support an education leader who made dramatic improvement in one of our schools.

Back in 2005, it was viewed as one of the most hopeful and aggressive attempts anywhere in Kentucky to breath life into a seriously failing school.

The Booker T. Washington Elementary School in Lexington was in terrible shape. Reading proficiency rates were terrible, and math proficiency was scarcely higher. This heavy minority school clearly needed a turn-around, and it looked like the Fayette County School System was serious about making that happen.

Petrilli had posted a great track record at another high minority school in the district, and she looked like the perfect choice – except to the minority parents at Booker T. They were demanding a black principal – period.

Petrilli was sent in, anyway.

As the two graphs below show, the turn-around in Booker T’s scores for reading and math were dramatic. Even though some of the increase from 2006 to 2007 can be explained by the inflation caused by new CATS scoring standards, the total rise is far too high to be solely due to that issue. 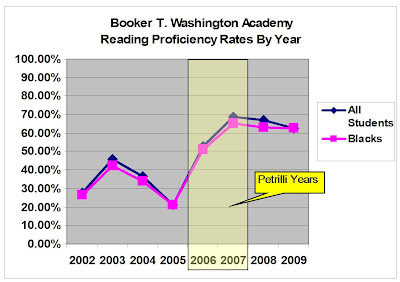 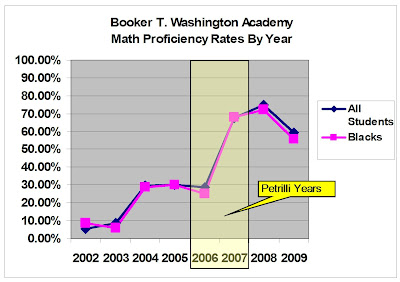 Very simply, the Petrilli era at Booker T. Washington was accompanied by real and very substantial improvement in both subjects.

But, then the roof fell in.

Friction grew between Petrilli and her minority parent population. They wanted her out. They wanted a black leader – period.

In August 2007, the parents won. Despite posting the dramatic score improvements shown in the figures, Petrilli got the axe. And, just to add insult to injury, the district accused Petrilli of cheating on the state tests.

For one thing, we know that there has been a noticeable decline in performance in Booker T. Washington in recent years. That is even more unsatisfactory because we also now know that the state tests in math got even easier in this time frame.

We also see something else. If Petrilli really had been cheating, then the scores after her departure should have sunk right back to near the levels of 2005. That didn’t happen. The scores did decline slightly in reading in 2008, but proficiency actually went up a bit more in math.

So, there was still some lasting impact from the Petrilli years. Moreover, the scores could not look like they do if Petrilli had cheated.

Sadly, by 2009, the proficiency rate trend in both subjects is in decay at Booker T. With Petrilli’s team and programs now largely replaced by other people and ideas, Booker T. Washington is losing ground, again.

Ladies and gentlemen, this is no way to nurture educators.

Why I am concerned about real KERA progress – Part 2

I wrote yesterday about how the results from the 2009 National Assessment of Educational Progress grade 4 math assessment concern me that KERA, 20 years later, isn’t performing nearly as well as we need it to.

Here is how Kentucky stacked up at the eighth grade level on the same assessment. As with the fourth grade example, I look only at white student scores here because about 85 percent of our students are white. It makes sense to examine how the vast majority of our students compare to their peers in other states. This also prevents giving Kentucky an unfair advantage in the comparison against states like California where there has been a huge influx of non-English speaking immigrants in the past few years.

Note that green is NOT GOOD NEWS for Kentucky on this map! States shown in green got math scores for their whites that were statistically significantly higher than our eighth grade whites got. 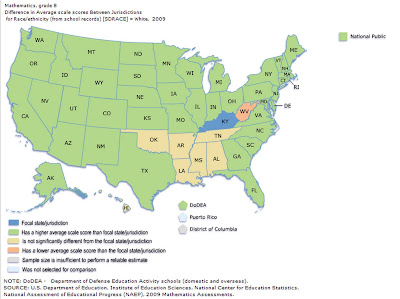 Note that only one state, West Virginia, did worst than Kentucky, and just six other states statistically tied us.

One of those ties was Mississippi, by the way. As with fourth grade, they caught us in the new NAEP math assessment.

That’s why, I must repeat, as KERA closes in on its 20th anniversary, I am concerned.

The US Chamber of Commerce’s new report, “Leaders and Laggards, A State-by-State Report Card on Education Innovation” takes a dim view of Kentucky’s policies for removing ineffective teachers from the state’s classrooms. The Chamber awarded us an overall grade of “F” for our performance on these teacher policies.

That is no surprise. Kentucky doesn’t even have a formal process to remove the teaching certificates of ineffective teachers.

This figure, derived from data in a table on page 35 of the Chamber report, shows how our principals answered several interesting questions concerning the teacher removal issue. 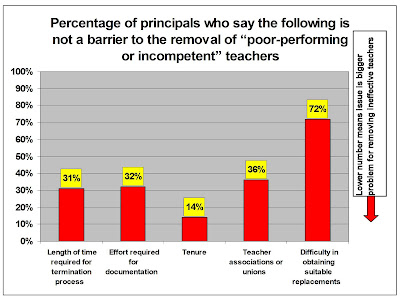 As you look at the figure, consider that a lower number means the issue is a bigger problem in removing ineffective teachers from our classrooms. The fact that the first four items are relatively big impediments to removing poor performing teachers is no surprise. But, these tend to be even bigger issues here than in other states with better policies.

For example, while only 14 percent of our principals say that tenure does not unduly get in the way of removing poor teachers, across the nation 28 percent said this isn’t an issue.

One statistic cited in the Chamber’s report stuck me as quite interesting. It is the percentage of principals in each state that say teacher removal is not adversely impacted by any difficulty in finding replacements. Here in Kentucky, a very large 72 percent of the principals say that the need to find a replacement teacher isn’t a big factor in the removal process. Apparently, most of our principals believe replacements are available for poor performing teachers.

In Kentucky, even in those relatively rare cases when poor performing teachers somehow wind up leaving one school system, they too often just show up in another school somewhere else in the state. That is due in part to a teacher evaluation system that functions mostly as a rubber stamp rather than a real analysis program that could alert the prospective new school district to the teacher’s true performance.

Why I am concerned about real KERA progress

So, if we want to know how the vast majority of our kids compare to their peers in other states, one way to do that is to look at white only scores on the National Assessment of Educational Progress.

This map shows how Kentucky’s white fourth grade students stacked up against whites in other states on the 2009 NAEP math assessment – not well at all! On this map, green is NOT GOOD for Kentucky. 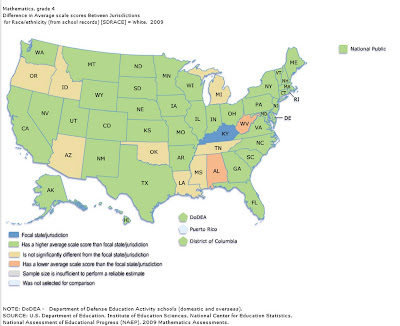 In all those states shown in green – and there are a bunch of them – their white fourth graders definitely outscored ours by a statistically significant amount.

In the eight states shown in tan, their kids statistically tied us.

White fourth grade students in only in two states, West Virginia and Alabama, did more poorly than our kids did.

Even white kids in the notoriously under-performing Washington, DC schools outperformed our kids (Should I mention they have had charters and vouchers there?)!!!

And, Mississippi matched us!

That’s why, as KERA closes in on its 20th anniversary, I am concerned.