The Southern Educational Foundation just issued “A New Diverse Majority,” a report on demographic changes in the public school student body. The report helps further a case I’ve been making some time about Kentucky – we don’t have a lot of minority students here.

In fact, as this graphical map from the Southern Educational Foundation shows, we have one of the lowest percentages of minority students in the entire country. We don’t look “Southern” at all. 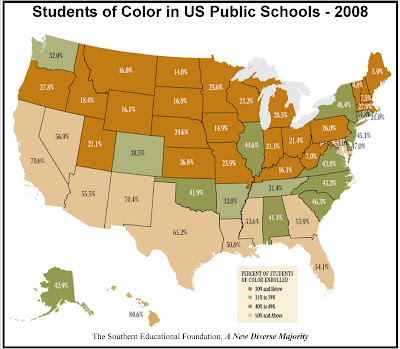 As the Bluegrass Institute has pointed out before, Kentucky’s heavy white advantage makes it difficult to develop an accurate picture of how we really do in state-to-state education comparisons.

For example, because the other races score notably lower than whites, states with a lot of white students often look better than they really should when overall scores from assessments like the National Assessment of Educational Progress are compared.

You just have to look deeper when the national student demographic chart is as full of different colors as the one the Southern Educational Foundation just published. Simplistic comparisons of overall scores just can’t give an accurate picture.

– Says forget the Race to the Top money, too

Down in Texas they just are not ready to surrender their state’s constitutional rights to govern education to the US Government. Not even for $700 million.

Here in Kentucky, adoption of House Bill 176 means we may have surrendered our rights to the Race to the Top sweepstakes for less than $200 million.

In it’s coverage of the passage of House Bill 176, the Louisville Courier-Journal notes several schools in Jefferson County would be identified as “Persistently Low-Achieving Schools” if the bill’s new formulas were applied today.

The article additionally says Jefferson County Superintendent of Schools Sheldon Berman told the newspaper that “district officials have already begun turning around most of those schools.”

Well, see if you can find much “turn-around performance” in the schools the Courier lists.

This table summarizes data found in the individual 2009 No Child Left Behind Report results for each school listed in the Courier’s article.

Only one school, Western MST High, increased both math and reading proficiency rates between 2008 and 2009, but the school still fell short of the required Annual Measureable Objective (AMO) required proficiency rate in both subjects. And, Western’s 2009 math rate only improved because its 2008 rate was truly abysmal. Western’s 2009 rate remains lowest of the group – hardly an achievement worth lauding.

It’s not hard to understand some of the reasons why this might be happening in Jefferson County.

In fact, in October Dr. Berman and two of his middle school teachers admitted to the Kentucky Board of Education that the union contract interfered with assigning enough highly experienced teachers to two of the district’s most troubled middle schools.

The Bluegrass Institute has also written a lot (such as here) about an on-going deception using a fabricated “At or Above Grade Level” scoring scheme to fool the people of Jefferson County about the real performance of their taxpayer-supported schools. Jefferson County took it upon itself to redefine and dumb down the old CATS scores, claiming any score above “Novice” was “At or Above Grade Level.” Considering CATS scores were already undemanding, this further decay of rigor was inexcusable.

I’m concerned that HB 176’s final language won’t override that union contract in Jefferson County, especially if some of the turn-around options that leave control in the hands of the school district are applied. If the district’s leadership thinks they are turning these schools around now, I’d like to know what they are looking at.

Quote of the day: A warning

“If you condition people to everyday, all day, depend on the government to do their thinking for them – they will become more obedient.” Congressman Ron Paul

Education Week reports (may be free access) that yet another study of the federally supported preschool program called Head Start shows the preschool program gives students a head start, but it doesn’t last past first grade.

The study raises questions about the efficacy of preschool programs. It mirrors earlier reports that came to the same conclusion.

Kentucky needs a clearer understanding of this situation before we try to expand preschool programs. We hear a lot from educators and other boosters about the value of preschool programs, but Head Start studies, which are some of the most extensive conducted in this area, continue to raise questions about that.

The Herald-Leader’s report on the vote in the Senate Education Committee makes that fairly clear, though it omits some additional supporting comments made during the committee meeting.

For example, I attended yesterday’s committee meeting. Senator Gerald A. Neal said during the discussion, “I’m not one who is ‘knee-jerk’ opposed to charters. In fact, I find, uh, it can under certain circumstances offer some interesting opportunities.”

WAVE 3 News quoted Neal as later saying, “Let’s come back with a separate bill and let’s look at what Senator Westwood has to offer here. Let’s vet it properly and raise all the necessary questions and let it rise or fall on its own merits.”

Most significantly, House Speaker Greg Stumbo says charters should be explored further. It is clear that a number of members of the Senate Education Committee, including some like Senator Neal, agree.

Thus, as the Herald-Leader article also points out, “The book on charter schools still might not be closed.” For the sake of our children, I certainly hope it isn’t.

Anyway, let’s also hope the omission of charters in our RTTT application doesn’t doom its chances in Washington.

There are plenty of somewhat vaguely described discretionary points floating around in the RTTT scoring plan. I don’t think anyone really knows exactly how those points will really be awarded. This could allow things to shake out differently from what some expect.

I think it may ultimately depend upon how earnest and aggressive a state’s overall application looks to Washington’s peer review teams. Kentucky’s failure to put charters in our application might not look to good to President Obama and US Secretary of Education Arne Duncan, both of whom have come out very strongly in favor of charter schools in the past year.

In fact, our very wide consensus of agreement between the school districts and the teachers’ union might work against us, as well. We have agreement. But, the resulting product is watered down in consequence.

Other states are not getting that level of agreement for their plans, but the reason probably is that their plans are more aggressive. What will Washington finally decide? Who knows?