BIPPS board member on ‘Kentucky Tonight’

Tim Yessin, a member of the Bluegrass Institute Board of Directors and a vice president with Fifth Third Bank’s Private Bank, will be talking about the state budget on “Kentucky Tonight” on KET tonight at 8 p.m. (EST)

– Sees indications the “raise all boats” theory is working there, too!

While our House legislators drag their heels about allowing charter schools in Kentucky (instead, pushing what could be a “do-almost-nothing” House Bill 176), kids in Los Angeles charters “outshine those at traditional campuses,” says the LA Times.

The Times says LA has more than 160 charter schools today. Do you really think that would happen if charter schools were doing a bad job in the nation’s second largest school system?

Per the Times, L.A. charter students outscore their counterparts in traditional schools.

Did you get that?

The Times isn’t one-sided in its coverage, admitting that there have been some charter problems. Some poor performing charters got closed.

But, when was the last time you heard a Kentucky public school was closed for bad performance? A handful have been reorganized, but the same staff with the same attitudes still seem to hover around in the system. Real change, change like they are seeing out in LA, has been illusive in Kentucky.

We have a bunch of high schools in Kentucky that could benefit from performance like the high-poverty (97 percent qualify for federal lunches) College Ready Academy No. 4 is posting in LA. The school’s students score 200 points higher on California’s test than other similar schools. Wow!

The Times also sees possible evidence that regular public schools are responding to the charter challenge and raising their performance, as well. The paper cites the example of the View Park charter and its nearby regular school, the Fourth Street Elementary. Six years ago, View Park outshined Fourth Street. Then, Fourth Street rose to the challenge, and today the two schools are performing neck and neck, both with sharply higher test scores. The paper says it’s hard to say with certainty that competition caused this dramatic change but clearly thinks there is enough likelyhood that happened to mention it in the story.

The Times also says, “Even the teachers union has shown signs of at least a grudging acceptance of charters.” The Times continues, “The union is talking of organizing charters, not just opposing them.”

The Times quotes UTLA Vice President Gregg Solkovits, “I think that the best way to describe our position now is, it’s not so much a question of charter or no charter but is it the best school for all students, including special education students, including English language learners?” How’s that compare to thinking here?

Come on, Kentucky legislators! Why keep denying our kids the advantages that College Ready Academy No. 4 offers? Why ignore the signs that charters create competition that spurs regular public schools to improve in ways we only dream about in places like Louisville? Why are you denying Kentucky kids the benefits that LA is reaping? Is that really the best thing for our future – our kids?

What is Race to the Top, anyway?

We’ve started to write about House Bill 176, which will support Kentucky’s application for Race to the Top (RTTT) funding, but I realize some readers may not know about this federal education funding sweepstakes.

RTTT is a competitive federal grant program intended to spur educational innovations in the nation’s poorest performing schools. It was created as part of the American Recovery and Reinvestment Act of 2009 (ARRA). The RTTT fund is going to be distributed in two different phases and totals $4.35 billion.

Quite possibly, some states will be big winners, while others will lose out completely.

If you don’t already know about RTTT and would like to learn more, check our new Wiki item.

– How House Bill 176 conflicts with Race to the Top requirements

While Kentucky Commissioner of Education Terry Holliday’s testimony yesterday on House Bill 176 tried to make it seem like this bill is totally compliant with the federal Race to the Top (RTTT) guidelines, I don’t think that is right.

This table outlines the four possible “School Intervention Models” allowed and required by the final Race to the Top guidelines and compares them to the five, not four, “Options” that HB 176 proposes. 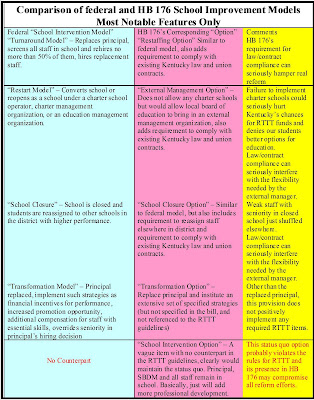 That fifth option in HB 176 could be a killer for the state’s entire application to Washington. It is a recipe to essentially do nothing new while RTTT is clearly intended to spur new and innovative ideas to turn the nation’s worst performing schools around. I’m sure plenty in Kentucky’s education community love this do nothing option, but the feds may not be so enthralled when it comes time to hand out the competitive RTTT dollars. If we mess this up, we could get nothing.

‘Comparison’ shopping for insurance is a trick

Click here to read the latest edition of the Bluegrass Beacon.