The news is full of Toyota recall information. That’s to be expected. But government ownership of two major Toyota competitors has to make one wonder: What’s up with all the government visibility in the matter?

LaHood also said Transportation Department officials are considering civil penalties against Toyota for its handling of the sudden-acceleration matter. House Energy and Commerce Committee Chairman Henry Waxman said he would hold a hearing to consider how quickly and effectively Toyota responded to complaints about sticking pedals and slipping floor mats.

General Motors is offering no-interest loans for as long as 60 months for purchase of a new GM model with a Toyota trade-in. For Toyota lease customers, GM will make as many as three payments, or a maximum value of $1,000. It’s your tax dollars at work to corrupt free competition.

These government announcements have had a major impact on Toyota stock, which has plunged about 19 percent since the start of the recall frenzy; the manufacturer has lost tens of billions of dollars in market capital. All that bodes well for the government-auto companies competing with Toyota.

It’s no secret that the government and union owned auto companies would like to see Toyota forced into union domination one way or another. The question is how much more can the government hurt Toyota by dragging out hearings, investigations, time taken to clarify government misstatements and double-guessing Toyota’s every move. Would the government take the same approach against its own controlled auto companies?

Is the government’s aggressiveness indicative of what other auto competitors and their suppliers can expect in the future? Is this an expansion of the government vendetta on the banks and the coal industry? Has the government taken all the steps necessary to separate its auto companies’ planning, incentives and strategies from Toyota investigations, research, data, hearings, records, analysis and questioning?

Toyota is a proven, top-quality company. It doesn’t need government to beat it into satisfying customers and doing the right thing.

The government-owned auto companies didn’t compete well with Toyota in the marketplace. But now they just might have the equalizers they need — the long arm of government interference and our tax dollars.

Which is more credible: Toyota or the government entities working to bring a great private company down?

It’s time for the commonwealth’s politicians and citizens to show support for a major free-market Kentucky manufacturer and employer.

One difference between charter schools and regular public schools

It’s a sad tale – one we want to safeguard against when Kentucky sets up charter schools – but it looks like there were a lot of fiscal oversight foul-ups in Ohio prior to the demise of the Harte Crossroads schools in Columbus.

Important records for Harte simply don’t exist, and the possibility of criminal activity over a three-year period is under investigation.

Meanwhile, let’s not overlook the fact that our public school fiscal accounting system in Kentucky is no rose, either.

Way back in December, 2006, the Legislative Research Commission issued Research Report No. 338.

It outlined a number of serious problems with the Kentucky’s MUNIS education financial accounting system that prevented accurate accounting in many areas of educational expenditures. Over three years later, the program still has not been fixed. We continue to be plagued with an information black hole when we badly need accurate “bang for the buck” information as our policymakers wrestle with some tough decisions about which education programs may need to be cut.

There have also been some fiscal improprieties in Kentucky’s public schools.

Targeted money has been misdirected.

Federal stimulus money has not been properly tracked.

No one could account for the true costs of our now defunct CATS system.

And, we regularly hear nagging reports of school personnel running off with money that should have been spent on kids.

Often, these scams went undetected for years, as well.

These sorts of things happen when fiscal controls are weak.

In sharp contrast, the Harte system is gone – completely. A number of other charter schools that didn’t measure up are gone, as well.

So, ultimately, which type of school do you think has a demonstrated history of more accountability – charter or public?

“What the heck is school curriculum doing in court, anyway? The answer tells us a lot about the problems of public schools.”

We blogged a few days ago about a stunning court case in Seattle that says the school district in that city erred when it selected Discovery Math for its students.

Here is some insight from Dick Lilly on that decision worth a read.

One of his key points, “…curriculum conflicts — math teaching is only the most visible — are both a symptom and a cause of the problems the U.S. has with K-12 education. Put simply: We don’t know what to teach.”

Check the linked article to learn more about the astonishing things this court case may have uncovered.

Education gap ‘at the top’ is widening in Kentucky

It’s the gap few talk about – the performance gap for our top students, those who score at the “Advanced” level on the National Assessment of Educational Progress (NAEP) and drag home those “5” scores on Advanced Placement exams.

Now, the Center for Evaluation and Education Policy in Indiana has issued an extensive report on the growing gaps for our very top scoring kids, including a state-by-state breakdown for Kentucky. You can access both from this web page.

Here is a graph from the report that shows the growth in our top students’ White-Black NAEP Math gaps between 2000 and 2008. All of the kids included here score “Advanced” on the NAEP 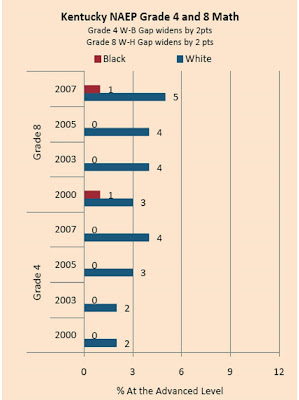 Note that the graph refers to a “W-H” gap for grade 8. I believe this is a typo and should read W-B. In general, there are so few Hispanics in Kentucky’s NAEP samples that scores are not reported for them.

Similar graphs are available for reading for poor versus non-poor kids (via Free and Reduced Cost Meals analysis) and other tables and graphs cover even more gaps by sex and for AP results. In general, as the report found nationally, Kentucky’s top student performance gaps are also growing.

UncategorizedBy Rick LFebruary 5, 2010
We’ve arrived – it’s blatantly all about what’s good for politicians now. Politicians certainly don’t care what the people think.
It didn’t used to be that way. There was a time when people and companies took pride in their ability to innovate, compete and perform to succeed on a level playing field.
Not now. Too many people find it easier to bribe and intimidate unprincipled politicians for special favors than to take personal responsibility to earn their way.
Consider all of the bribes taking place to get health care votes in Congress and to get positive endorsements by various groups. That approach stinks to everyone but the politicians playing their sleazy game.
Look at how politicians cater to unions that can’t earn their membership without politicians forcing payroll deduction of dues, prevailing wages, union-only project labor agreements on stimulus construction, no right to work option, constraints to school choice and special exemptions in health care taxes.
Kentuckians pay dearly for all of these shenanigans and lost freedoms.
‘Crony Capitalism’ has replaced the basic constitutional approach of free and open competition in our government.
[youtube=http://www.youtube.com/watch?v=_fnwBUu6l2w]
Washington politicians don’t even try to understand the ramifications of the thousands of pages of their micromanagement rules on our businesses or us before voting. Yet, politicians in Frankfort remain silent on what Congress is ready to throw our way. Peer cronyism? What happened to principled leadership and representation?
What is now good for our out state and federal controlling politicians is not good for Kentuckians or our pocketbooks. It’s time to scream ENOUGH of your special deals and ENOUGH of your self-centered focus! Stick to the constitution and principled leadership!

More breaking coverage of the math curriculum lawsuit in Seattle

More coverage, this time a video, from KOMO TV in Seattle on the lawsuit against Discovery Math.

If your Kentucky student is using any of the textbooks shown in this video, we’d like to hear about it.