CBS News gets it – Where America Stands: Schools

Check this out at CBS News.

The overall CBS report hits a lot of very exposed nails squarely on the head. Unions are standing in the way of progress. Training for both teachers and principals needs improvement. Schools need to be run in a more orderly and business-like manner.

And, it can work.

CBS News highlights Washington DC schools chancellor Michelle Rhee, who is a great example of what can be done when public school officials are willing to confront naysayers and do what is right for kids.

In DC’s Sousa Middle School, Rhee fired a third of the teachers and the principal. Under new leadership, the school’s test scores jumped up dramatically – 25 percent in math, 17 percent in reading.

Low performance wasn’t the kids’ fault – it was status quo adults who held the school back, just like happens in far too many parts of the country, including right here in Kentucky.

In fact, Ms. Rhee likes charter schools, and said so just this past June in Colorado.

Still, this generally well-done CBS News clip makes it clear that the public school system in this country needs accountability and take-charge leadership with the authority to act – the sorts of things that only exist today in very few places like Ms. Rhee’s DC system.

Massachusetts probably has the best education standards in the country today. Not only does the state rank at the top on the latest National Assessment of Educational Progress assessments, but its education standards have received high marks from many reviewers.

Thus, today’s editorial from the Boston Globe is catching the attention of education watchers around the country. The Globe first points out that Massachusetts educators support the process to create common standards for all (or nearly all) of the states.

However, after looking at the latest draft of those standards in mid-January, the Globe writes:

“Massachusetts reviewers said, ‘We believe there are still major improvements to be made before Massachusetts can adopt them with confidence.’”

We are told the final version of the Common Core standards are due in mid-February. Perhaps the problems spotted in Massachusetts can be fixed by then, but it would be wise for Kentucky to be ready for a further delay in the final release.

– Do ALL Kentuckians have a stake here?

In our ‘Why would parents prefer’ series, we’ve been talking about the academic performance of schools in the Knox County and the Corbin Independent School Districts. Knox County recently cancelled a long-standing student transfer agreement with Corbin, which allowed parents in both districts a choice about where to send their students.

That was the “bang.” Now, let’s look at how much input – namely “bucks” – each school system gets per child.

Here is the latest available audited data, which comes from the 2007-2008 Receipts and Expenditures report, from the Kentucky Department of Education. 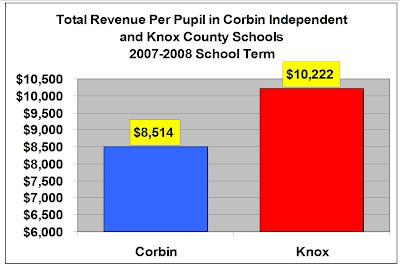 Once again, Corbin shines, getting MUCH better academic performance with far fewer dollars.

Knox County gets far more money per child than Corbin does. But, clearly, Corbin does a far better “bang for the buck” job with what it receives.

This graph leads to another issue. It may be that every taxpayer in Kentucky has a “dog in this fight.”

Since a lot of the money involved comes from statewide, tax-funded SEEK dollars and from federal tax dollars – all of which Kentuckians across the entire state must pay – why, exactly, would any Kentucky taxpayer want to force kids back into the Knox system when students get much better educations in Corbin, at much lower cost?

By the way, the difference in state-plus-federal funding sent to Knox versus Corbin Independent was $1,527 per pupil in the 2007-2008 school year. It looks like if around 150 students must return to Knox schools, then the taxpayer will get hit for about a quarter of a million dollars more, $1,527 more per child, to fund this loss of parent choice that forces kids into lower performing schools.

Worse, since Knox schools have a much, much lower graduation rate, the real costs over the lifetime of these students could run many times that amount.

So, maybe Kentucky taxpayers need some representation when the Kentucky Department of Education considers Corbin Independent’s appeal of the transfer agreement cancellation. It looks like everyone in Kentucky could have a lot of money at stake here.

– Look at the difference in high school graduation rates

Here’s another reason why parents would clearly prefer the Corbin Independent Schools to those in the Knox County School District. High school graduation rates in the two school districts are light-years apart. 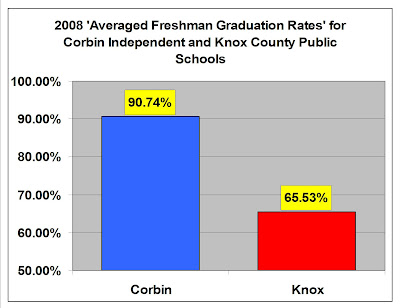 The formula used to compute the ‘Averaged Freshman Graduation Rate’ (AFGR) has been thoroughly researched by the US Department of Education. It is a MUCH more accurate formula than the one currently used by the Kentucky Department of Education (KDE). That KDE formula is known to provide highly inflated results and to provide widely varying accuracy from district to district. In fact, the KDE has announced it is switching to the AFGR in 2011.

In any event, the data is very clear.

A high percentage of the kids in Corbin graduate.

About one in three kids in Knox County doesn’t.

Here is the data used to compute the AFGR.

The enrollment comes from annual Growth Factor Reports for the listed years and the graduation counts are from the 2008 ‘Grad Rate 0408’ Excel Spreadsheet.

Note that – in line with No Child Left Behind definitions – only students who graduate with a regular diploma in the standard four years of high school plus students with learning disabilities who get a regular diploma within five years (IEP-5) are included in the graduation counts.

Rift growing between governor and legislators?

Kentucky reporter/commentator Ronnie Ellis writes there is growing and sharp discord between the governor’s office and key legislators. The rift could have important implications on the development of the state’s troubled budget.

Ellis writes there are general feelings of disgust on both sides. Things are now deteriorated to the point where legislators must threaten subpoenas in order to gain needed access to executive branch reports.

Berman said he was familiar with the charter schools in Massachusetts where he served before coming to Kentucky, implying his opinion of failure was based at least in part on that experience.

Well, the people who made this two-part video in early 2008 about Boston charter schools would clearly disagree with Dr. Berman.

As you listen to Part 1, count up all the different schools mentioned. Berman claimed only about two out of 50 charter schools in Massachusetts really perform well. It sounds to me like there are more than two good performers just in Boston.

Did you catch the statistic of a 100% rate of going on to college? Did you notice how many minority parents were interviewed? It doesn’t sound like they think charter schools are failing their kids.

As a parent, do these public schools sound like a place where your son or daughter could learn?

As one commentator mentions towards the end of Part 2, some educators in regular public schools do feel threatened by charters. After all, charter schools shake up the status quo by showing that kids who don’t succeed in regular public schools can be successfully educated. Sadly, that sort of fear seems to be present in Louisville, and it stands in the way of real progress in education for our kids.