Rep. Harry Moberly, D-Richmond, has announced he will retire at the end of the year when his current term ends.

Moberly was once a great mover and shaker in the Kentucky House, playing a key role in a number of actions that included a stauch defense of the Kentucky Education Reform Act since that law’s enactment in 1990.

His departure will complete a 31-year career in Frankfort.

It looks like the first show in KET’s new series, Education Matters, which aired Tuesday on KET 1, is already on line.

As I mentioned in #3 in this Charter School Myths series, a 2009 report called “Informing the Debate, Comparing Boston’s Charter, Pilot and Traditional Schools” found charters notably outperformed the regular school system that city.

This graph from the report may help make that clearer. It is based on a very strong investigational method where performance of students who won lotteries to enter charter schools are compared to results for students who also entered those lotteries but didn’t win a charter school slot. This is basically a random-sample approach, which is the gold standard for similar research efforts. 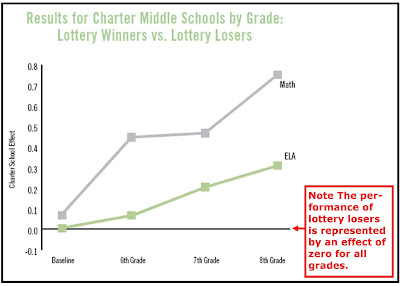 The report says this graph plots the scores of lottery winners [shown by the green line for English Language Arts (ELA) and by the gray line (math)] to lottery losers scores (represented by the constant zero horizontal black colored axis line) over grades in middle and high school charter schools. The report concludes, “The relatively steep upward slopes of the lines suggest that Charter School impacts increase over the course of school.”

In other words, charter middle schools in Boston provided stronger educations for students, and the amount of that extra education increased as students remained in the charter schools for longer periods of time.

The report indicates that relative rise for math performance in charter schools equates to moving from the 50th to the 69th percentile of student performance, or erasing about half of the white to black achievement gap. The report terms this an “extraordinarily large” increase.

Does this look like evidence of “a failed reform” to you?

It doesn’t look like a failure to folks in the know in Massachusetts, either.

If you missed Monday’s remarkable KET Kentucky Tonight show on charter schools, you can now watch it on line here.

The Bluegrass Institute’s Jim Waters and Pastor Jerry Stephenson, chairman of the Kentucky Education Restoration Alliance, made the case for bringing charter schools to the commonwealth.

Note that you need the flash media player in your computer to view this. You probably will be directed to get that viewer when you try to open the link if you don’t already have it.

View this show for yourself and let us hear your feedback.

By the way, I don’t recall KET television ever getting a show online so quickly. Good job, KET!

Want to voice your concerns about state spending?

FreedomKentucky.org recently enabled comments on our spending database.  You can now register on the database to leave comments about what you find while sorting through the list of cities, school districts, and state agency check registers!

Taxpayers will soon be able to see what state lawmakers are doing to improve education, pass a balanced budget, lower taxes, modernize labor policy, stand up for Kentuckians against Washington’s health care push and close the gap on public pensions at FreedomKentucky.org.