But, will we get any money?

Just before the Senate Education Committee meeting started today, all sorts of key education types started running up to Kentucky Education Commissioner Terry Holliday, excitedly congratulating him on getting Kentucky to the finals in the Race to the Top federal education funding sweepstakes.

It is exciting for our educators. A “win” in this game could be worth hundreds of millions of dollars to the Bluegrass State.

However, after a first look at the complete list of states that made the cut, I am wondering exactly how the selections, which were made in total secrecy, were determined.

The most glaring fact is that only one state West of the Mississippi River is in the final list of 16 states – just one. That high degree of regional bias is undoubtedly going to kick off a firestorm.

There are other surprises. Michigan, which entered the competition, was not selected despite legendary problems in the Detroit schools.

Moving back East, West Virginia with its legendary education issues failed the cut.

Anyway, as we wrote earlier the final winners are going to be selected by US Secretary of Education Arne Duncan. His office made it clear that he may disregard the results of the peer reviews and make the selection based on other, not yet announced, criteria.

Since Secretary Duncan is a big fan of charter schools, Kentucky still can’t plan on getting a dime of RTTT money.

An engine or a rudder?

Should government be the engine that propels or a rudder that guides?  This is the central question about the role of government that we use to frame public policy.

We want to know what you think!

Take a second and give us your thoughts in the comment section below!

Common Core Standards going out for another review and comment

The National Association of State Boards of Education reports those Common Core standards Kentucky made such a big fanfare about adopting a week ago are going out for yet another draft review on March 8, 2010. The review period will run three weeks, which will make it very challenging for a final document to be issued in April.

Hopefully, this will turn out OK in the end, but we are taking a chance on something that no-one has ever seen, because it still doesn’t exist.

How many years will it take to get Kentucky education where it needs to go?

The new PLAN scores for Kentucky’s 10th grade students that released last week have a little good news and a lot of very cautionary news.

The good news is that our white students’ average score in English now exceeds the PLAN “Benchmark” score that represents good odds that the students will pass their first college course in English. That means a little over half of our high school students are on track to do OK in college English.

The not so hot news is that in all other areas, and in English for black students, our kids’ average scores are still below the Benchmarks for adequate college preparation in the given subject.

The even less happy news is that, after four years of PLAN testing, our rate of progress is extremely slow.

I took a look at the change in PLAN scores between 2006-07 and 2009-2010. I used those changes to estimate how many more years we are going to need for our white and black students’ average scores to reach the PLAN Benchmarks in English, math, reading and science. This graph shows how that turned out. 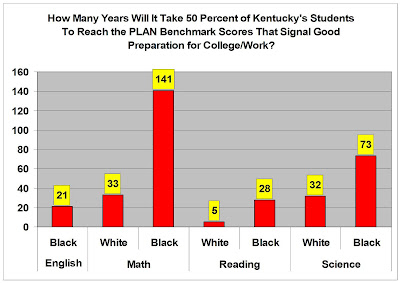 Bluntly put, our schools need a serious jump start if we are going to get all of our PLAN averages up to the Benchmarks in a reasonable amount of time. The situation is critical for our black kids.

Keep in mind, if our average score just matches the benchmark, that means half of our kids still score below that level. Thus, the times shown in the graph are not even close to the full amount of time needed at our current rate of progress to get the majority of our students ready for college work.

As I said, we need some serious jump-starting here. Hopefully, as Senate Bill 1 from 2009 and our new education standards come on line, we’ll get some of that badly needed push.

E-Verify is an Internet-based system that allows an employer, using information reported on an employee’s Form I-9 to determine the eligibility of that employee to work in the United States.

Clear all the smoke, rhetoric and good intentions. And find a big, comfortable chair if you are going to wade through the final rule.

It really doesn’t matter that the system verifies properly 93.1 percent of people. Why?

This is really important because businesses being challenged by the government for hiring illegal people have to pay all legal and procedural costs out of their operating profits. These are not planned expenses.

On the other hand, government prosecutors do not have time, money or integrity constraints. They get paid regardless of whether they are right, wrong, timely or not.

“No Crime But Prejudice” by Jon Entine summarizes how the government targets individuals and corporations and subjects them to a long miserable experience. Fischer Homes of Crestview Hills was the subject of the book and the target of wrongful prosecution.

It’s clear the government not only has a big stick but it’s a big stick with no accountability — an absolute fact that shatters the foundations of freedom, liberty and innocent-until-proven-guilty policy.

This is one Kentucky example. It should scare the daylights out of you if you own a business!

Recent, credible evidence suggests that students who attend charter schools score higher in math and are more likely to graduate with honors than their peers in traditional public schools.