How many “Persistently Low-Achieving Schools” will be identified by Kentucky’s RTTT plan?

The Kentucky House Education Committee met today to discuss House Bill 176, legislation supposed to support our application for funding under the federal Race To The Top (RTTT) competition.

A logical question was asked – how many schools are going to wind up tagged as Persistently Low-Achievers subject to sanctions and support to be offered as a consequence of the RTTT program?

The answer from Kentucky Commissioner of Education Terry Holliday is that when his department did a trial calculation using past testing data, only 12 schools would be tagged as “Persistently Low-Achieving Schools.” Six are Title 1 schools, which means an appreciable portion of the students are low income and the school gets federal Title 1 dollars for them. Six other schools are from a separate group of more well to do schools that don’t qualify for the Title 1 designation.

The 12 schools are listed in this table along with their 2009 Kentucky Core Content Test (KCCT) reading and mathematics scores and their 2009 ACT Composite Scores from 100 percent testing of the 11th graders. School names in red are the Non-Title 1 schools. I should emphasize that the schools in the table were only identified as a trial run and are not official RTTT Persistently Low-Achieving Schools. Still, there are some important implications from this trial run data. 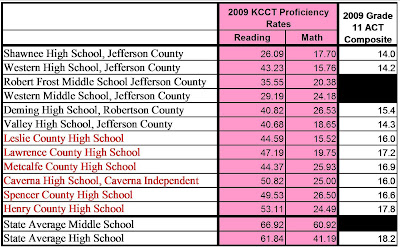 By definition Non-Title 1 schools have wealthier students. That raises a rather serious policy question – will RTTT money go to the most deserving schools?

Henry County High, for example, doesn’t score much below the state average on the ACT. In fact, 102 schools had lower ACT Composite Scores for their 11th graders in 2009. Still, Henry County, in this trial run, would qualify for a lot of attention and financial help while there are undoubtedly some other Title 1 schools with lower performance than Henry County that won’t get a dime from this program (I have not checked that, but with the majority of the state’s schools in Title 1 status, and with over 100 schools scoring lower than Henry County, I’d be very surprised if I’m wrong).

So, here we have another federal education program that may throw literally millions of dollars at the wrong schools, while other, lower performing schools get nothing.

This is very much like what happened in the early days of KERA, when our KIRIS test wound up identifying some of the state’s top schools as low performing.

It didn’t make sense in 1993, and this RTTT business is starting to look like it might not make sense now.

The Kentucky House’s Education Committee discussed and approved House Bill 176 today. This bill is designed to support the state’s entry in the federal ‘Race To The Top’ funding sweepstakes.

We’ll be doing a lot of analysis of the bill, but one provision is such bad policy that we think Kentuckians need to know about it now. That provision sets a ridiculously low threshold for the high school graduation rate that identifies a “Persistently Low-Achieving school.” The bill sets that standard at a 60 percent rate or less for three or more consecutive years. In other words, a school with a graduation rate of 61 percent is no problem at all.

Clearly, whether you want to blame the feds or our local folks, if the real goal is to take action on schools with low graduation rates, HB 176 needs a lot more work.

By the way, I did HB 176 type calculations of the number of schools that fell below 60 percent, 70 percent, 75 percent and 80 percent cutoff rates using the latest available data from the Kentucky Department of Education.

Here is what I found. 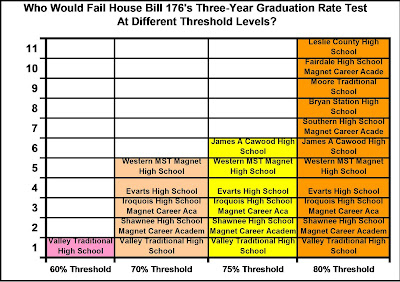 The excuse I am hearing for this ridiculously low 60% figure is that it is in the definitions provided by the US Department of Education’s RTTT guidelines. This lowball rate is in the federal guidelines, but I can’t imagine anyone in Washington complaining if Kentucky sets a more realistic rate. In fact, I should think this would enhance our RTTT application.

No charter schools in Kentucky: Big deal or little concern?

While Kentucky’s education establishment continues to fight to keep charter schools out of the commonwealth, other states are leaving us behind. In Texas, for example, black students have made more than twice the progress in math performance — when compared to Kentucky’s black students — since charters began in the Longhorn State.

A group of House lawmakers have sent a letter to Attorney General Jack Conway urging him to challenge the federal legislation based on incentives offered to Senators of other states.

The letter, signed by 29 Kentucky lawmakers, including House Minority Floor Leader Jeff Hoover, R-Jamestown, states: “The special deals contained in the bill to win support from Senators in Louisiana and Nebraska is undemocratic and results in inequitable compromises that impact Kentucky taxpayers.”

It calls on Conway to “join with Attorneys General from Alabama, Colorado, Florida, Idaho, Michigan, North Dakota, Pennsylvania, South Carolina, South Dakota, Texas, Utah, Virginia, and Washington state to call on the Senate to remove the special language from the health care reform legislation which is unconstitutional, expensive, and inequitable to Kentuckians who did not receive special breaks from the Senate.”

Is this why Kentucky’s high school graduation rate is increasing?

The statewide minimum is 22 credit hours, but with many Kentucky students exiting high school unready for work or postsecondary studies, this minimum appears too low. If it is worthwhile for the regular high school students to complete more work to earn a diploma, is it really doing the alternative school students and their future employers a favor to require less?

Education Week is reporting (subscription) that a second study has just been released on the charter schools in New York City. Like an earlier study from Stanford researcher Caroline Hoxby, this new report also finds kids in NYC charters are outperforming kids in the regular school system.

What is different, this time, is the new report comes from the CREDO group, also from Stanford, which earlier issued a general report on 15 states and Washington, DC, that found charter kids only outperformed their peers once they had been in charters for three years.

Thus, the evidence continues to mount – Kentucky is making a mistake by not establishing high quality charter schools such as now are clearly to be found in New York City.