It’s time for some new thinking about old ideas concerning state workers and their benefits.

One of the more intelligent parts of the Kentucky Education Reform Act of 1990 (KERA) was the requirement that all people working in the state’s public schools would have to have at least a GED or high school diploma. After all, if we are going to tell kids that education is important, it makes no sense to provide a daily example that raises questions in young minds about whether that is really true.

So, along comes House Bill 142 in Tuesday’s meeting of the House Education Committee. The legislators were told that this bill will allow school districts to apply for a waiver from the long-standing rule in KERA for “certified employee” hires to have at least a GED. That includes such people as cafeteria workers and janitors, and it also most specifically includes school bus drivers. In fact, bus drivers were the only employees specifically mentioned in the meeting.

The argument for the bill is that some rural districts are having problems hiring bus drivers.

However, not one specific example of a district having such problems was offered.

Not one superintendent or district school bus supervisor was brought in to discuss the problem.

The bill’s sponsor seemed happy that bus drivers would have to pass the Commercial Drivers License tests to get the job. That doesn’t seem like much of a recommendation for someone who will have to deal with kids every day and maybe have to occasionally deal with a crisis situation involving those young charges. A CDL shows you can mechanically handle the rig and know the rules of the road. I don’t think it requires any demonstration of skill with handling passengers, especially little ones.

Representative Derek Graham quite properly questioned a provision in the bill that the waiver could only be used for employees born in 1959 or earlier – in other words, people over the age of 50.

Isn’t that age discrimination, asked Graham, and isn’t that illegal?

The incredible response was that since no legislators with law degrees were present, the committee needed to pass the bill and let the courts decide this issue later!

Now that, ladies and gentlemen, is a fine example of a committee not doing due diligence before passing a bill on to the entire house!

Aside from turning the “Education Pays” slogan on its ear, this bill is a beautiful case in point of legislators not doing their jobs well. The entire floor of the House should not be tied up doing work that should go on in a committee. Sadly, it now looks like all our House legislators will have to waste valuable floor time debating technical questions that should have been worked out in committee.

It was most telling that the House Education Committee chair admitted this bill needed more discussion. But, it doesn’t seem right that the committee, knowing this, sent the bill onto the floor, anyway.

Finally, why does this bill use a cutoff age of 50 as a waiver limitation? If there truly are driver shortages in some districts, why wouldn’t someone aged 40, or 30, or maybe even in his or her 20’s be just as suitable? Is someone’s political axe getting ground here?

What is the possible justification for this arbitrary and indefensible requirement that seems highly likely to do nothing more than land the taxpayers in court, ultimately paying a large sum to those younger individuals who are to be unfairly treated by this very poorly conceived legislation?

Here are a few thoughts:

1) KERA has enough problems without undermining its good parts to benefit adults at the expense of kids. People working with kids in our schools should have at least a GED. Those who don’t provide very negative role models.

2) Legislators need to do their committee homework – in committee. There was no reason to vote this bill out of committee today. The questions raised were sufficient to table the bill for further discussion AFTER legal opinion on the age discrimination issue could be obtained. If there is need for a legal opinion on a bill, get it in committee! It’s a committee’s job to do as much as possible on a bill so it won’t excessively tie up the full House.

3) If there really is a bus driver shortage, let’s accurately describe where that is happening and find out why. Is the person running the bus program in the district hard to get along with? Are drivers treated fairly? If relief really is necessary, let’s make it temporary, and clearly stipulate that the drivers hired will need to get their GED’s in a specified amount of time or be subject to immediate replacement if a fully qualified applicant with a GED or more applies. Maybe we can sweeten the deal by helping the drivers get their GEDs. But, let’s not plan to place a contradiction in front of kids about the need for education any longer than absolutely necessary.

Parents and college educators are suing the the Seattle public schools over the choice of math programs in the district’s schools.

The series, “Discovering Math,” is a darling of fuzzy math types and very likely is being used somewhere in Kentucky, too.

Here is the link to the KIRO TV news article about the lawsuit with an internal link to a newscast, as well.

If you know of Kentucky schools using this program, let us know either by a comment to this blog or via e-mail.

A court decision is promised by mid-February.

What progress in education?

– New international data shows US not making any

Recent data from “Education at a Glance 2009”, a report from the Organisation for Economic Co-operation and Development (OECD), paints a disturbing picture about educational progress in the United States.

This OECD graph shows the comparative education levels of 55 to 64 year-olds (solid red squares) versus 25 to 34 year olds (the triangles) in OECD countries. 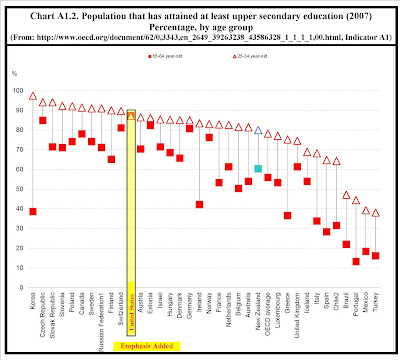 What sticks out right away is that while many countries have dramatic differences in the education levels of their older and younger populations, that isn’t the case in the United States. In fact, the chance that older and younger US citizens have completed an appreciable part of secondary education (not necessarily all the way to a high school diploma) is exactly the same.

Things look even worse when we examine the college picture.

This next graph was actually developed by the Bill and Melinda Gates Foundation from OECD data. 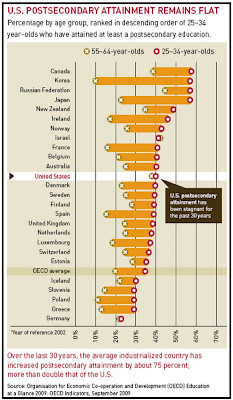 It shows that the postsecondary attainment between younger and older adults in the United States looks exactly like the first graph – flat. We see no improvement in the level of education in our younger adults. That has allowed a number of other countries to catch up to, and surpass us, for college educational levels.

Bottom line, other nations have figured out that education really does matter. They are moving out on that knowledge. Meanwhile, US complacency will soon see one of our major economic advantages erased as more countries like Korea start to surpass us in educational attainment.

Tip of the hat to the Prichard Blog, which made me aware of the OECD-based graph from Gates (though not the information in the first graph).

– They do charter schools right!

While Kentucky debated its unexciting House Bill 176 to support our application in the federal Race to the Top (RTTT) education funding competition, other states weren’t sleeping.

As we recently reported, Massachusetts already has charter schools – great ones – but the new legislation will add still more of them.

In addition, Massachusetts has come face to face with the “adults’ interests versus students’ best interests issue” – which hamstrings us in Kentucky. The Globe says Massachusetts’ new law will, “ease the way for superintendents to dismiss inadequate teachers and alter tough-to-change workplace rules such as the length of the school day.”

Kentucky’s milk toast bill doesn’t begin to compare. There is nothing to support teacher firings, just reassignments. There are NO provisions to alter workplace rules, either. In fact, as Kentucky Commissioner of Education Terry Holliday explained when the House Education Committee heard HB 176, there really isn’t much change in the bill at all.

Now, it looks like a sense of reality may be settling in at the Kentucky Department of Education about all of this. Commissioner Holiday told the annual meeting of the Kentucky School Boards Association on Saturday that he thinks our RTTT application has only a 50 – 50 chance of approval. He is pessimistic because we didn’t enact charter schools with HB 176. He says that if we don’t get an award when the Phase 1 RTTT winners are announced, he will have to put charter schools into the mix to have any success with the Phase 2 application.

Certainly, if competition like that from Massachusetts is going to typical, and if the RTTT judging in Washington is fair, and if the feds keep to their many strong statements about favoring charter schools, then Holliday is right to worry.

After all, just consider this comment from Massachusetts’ governor Deval Patrick, “For the sake of the children, commit to get it right.”

Here in Kentucky, the best we can say is that for the sake of the adults, we didn’t commit to much of anything.

“A popular Government, without popular information, or the means of acquiring it, is but a prologue to a farce or a tragedy; or, perhaps both.  Knowledge will forever govern ignorance; and a people who mean to be their own governors must arm themselves with the power which knowledge gives.”