The graph I posted a few minutes ago is already out of date. The Kentucky Department of Education just released the 2009-2010 results for the ACT, Incorporated’s EXPLORE and PLAN tests.

I ranked the high schools in Knox and Corbin for the new PLAN data and added that to the data I ranked earlier for the 2008-09 year.

Here is how that came out. 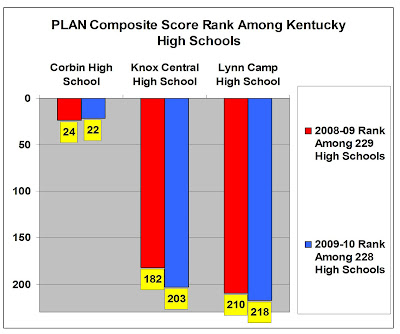 Note to avoid confusion. The graph I posted earlier is for the eighth grade EXPLORE data, not PLAN data. I’ll post that tomorrow.

As you can see, Corbin improved its ranking, while both high schools in the Knox County system lost more ground.

As the deadline closes for Saturday’s rally to support school choice in the Knox/Corbin area, the lawyers for the two sides are swapping arguments with the Kentucky Department of Education.

The lawyer for Knox County is mostly complaining about all the money his district loses. Somehow, that lawyer thinks that more money automatically will equate to better educations. There is a ton of research, including some of our own in our Bang for the Buck report, that proves otherwise. Knox’s lawyer better try another tack.

The lawyer for Corbin takes the high ground, talking about the much better education kids get in Corbin while offering a rebuttal to the idea that somehow the kids magically bring better educations with them when they switch school systems. The Corbin lawyer cites evidence that shows it’s the Corbin schools – not something innate in the kids – that provides those better educations.

Certainly, there is no doubt that kids in Corbin run educational rings around the Knox County kids.

For example, consider the ACT, Incorporated’s high school readiness test called EXPLORE, which is given to all public school eighth graders in Kentucky.

Out of over 300 schools that get EXPORE scores in Kentucky in last year’s school term, Corbin’s middle school ranks 36th. In very sharp contrast, Knox County’s two schools rank near the bottom of the stack. 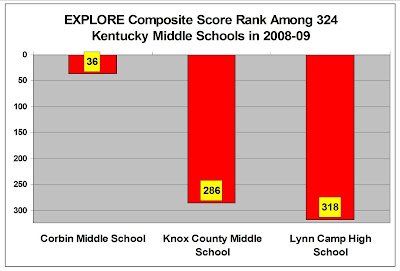 I have four children, and I want them to grow up in a country that has a working First Amendment.

Think we could play this video at the healthcare summit?

Even though he is no longer with us, I think Milton Friedman should still be offered a seat at the healthcare summit going on in Washington D.C. right now.  Maybe in his absence we can just play this video…

Have our representatives forgotten why they were elected? Richard Durbin did on NPR.

This morning on NPR, Steve Inskeep interviewed Senator Richard Durbin regarding the healthcare legislation currently before Congress.  The conversation moved towards the potential use of the reconciliation strategy that would allow congressional democrats to pass healthcare legislation with a mere 51 votes in the Senate.

After some generalities were discussed, Inskeep asked a very direct question: Even knowing that the majority of Americans are opposed to this legislation, will you pass this using reconciliation?

His response: I hope it doesn’t come to that.

Seriously?  Inskeep, not satisfied with the answer, asked the question again.  This time Durbin basically said that Americans may be scared of it now but the legislation will benefit them in the end.

Wow.  Regardless of how you view healthcare reform, this is a problem.  Is this the attitude we want our elected representatives to have? This is a problem that is true on every level of government and is particularly of interest in Kentucky right now as the 2010 General Assembly is under way.  Take the time to learn about what is going on in Frankfort and contact your representative to tell them how you feel about legislation that is important to you.

We reported a few days ago that the Central Falls School District’s superintendent was unable to get teachers to agree to an improvement plan and was planning to fire all the teachers in the district’s Central Falls High School.

Now, the Central Falls Board of Education has voted to do precisely that – firing every teacher in their dismally performing high school – apparently reading out every one of the school staff members’ names individually during the process to leave no doubt what so ever about the action.

This dramatic vote actually came shortly after union folks from across the state, and even outside Rhode Island, descended on Central Falls in a noisy, rancorous rally.

Apparently, the Central Falls Board just had enough of horrendous dropout rates and lousy test scores, so even teacher-attempted intimidation didn’t work.

The board was also unimpressed when teachers refused salary increases of $3,400 to do the extra things needed to try to turn the failing school around. Teachers demanded three times as much as the district could afford.

While teachers are screaming, the Central Falls Board has some pretty impressive backup in its corner.

One of those backers is Rhode Island’s Education Commissioner Deborah A. Gist.

Gist moved swiftly on new federal guidelines which tagged Central Falls High as one of her state’s very lowest performers. Gist told the impacted districts and schools that they had until March 17 to decide which federal reform model they wanted to use. When the Central Falls teachers turned down a reform model that would have preserved their jobs, the local board and superintendent were forced to take more drastic action.

More support for the board’s action comes from a really high-powered source.

I don’t know if Rhode Island applied for Race to the Top funding, but if they did, I would suspect the action in Central Falls will give the state a huge boost in the competition.

Meanwhile, some Kentucky schools founder along pretty much on a par with Central Falls High, but despite all the noise about reform, Kentucky hasn’t displayed anything like the determination in Rhode Island to have teachers either get on board with real reforms – or get out.

That lack of commitment might come back to bite us when Secretary Duncan starts to hand out those Race to the Top funds in the next few weeks.