Much of the discussion about public charter schools involves the impact these schools have on urban areas. And there are some great success stories, including those involving Knowledge is Power Program (KIPP) academies in some of the most challenging inner-city areas in America.

However, as the putkidsfirstky.org Web site notes, “In Kentucky, many rural areas are more impoverished than our urban areas and, unfortunately, are experiencing crime rates.”

According to the National Alliance for Public Charter Schools, around 20 percent of the nation’s more than 5,000 (and growing) public charters are located either in rural areas (696 charter schools) or small towns (387 charters).

The evidence suggests that charter schools would provide a viable option both for parents being harassed by educrats in both Kentucky’s big cities and rural areas.

Charter schools could re-empower parents in both Louisville’s West End and Knox County’s rural areas the ability to emancipate their children from miserably failing school districts.

New scores from the ACT, Incorporated’s EXPLORE and PLAN tests are out. The Herald-Leader covered some of the general stuff, already, though the paper may be making too much of an apples to oranges comparison by stacking up our 2009-10 scores to outdated national average scores posted half a decade ago.

The good news overall is that we are seeing a small amount of progress, which is exactly what Senate Bill 130 from 2006 intended as the EXPLORE and PLAN tests are aimied at getting our kids better prepared for college. Still, there is a long way to go, and there is at least one troubling area the newspaper didn’t cover.

That problem area is the unfortunate growth in performance gaps between Kentucky’s white and black students on the PLAN tests. 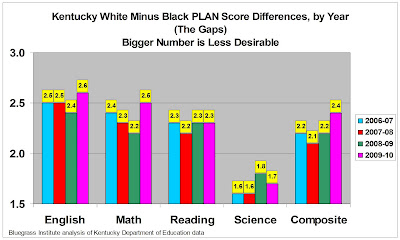 As you can see in the graph, the white minus black PLAN score gaps grew between the 2006-07 and 2009-10 school years for every area except reading. While the growth of the gaps has been small, growth isn’t what we want.

Another interesting thing in the graph above is that the science gaps are much smaller than gaps in the other subjects. Could this be an indication that even Kentucky whites under-perform in this area? Do our blacks engage better with science courses?

More research is clearly needed on that, because there could be a clue here that will help with the other subjects, as well. Certainly, with the gaps large and growing larger, such help is badly needed.

(CORBIN, Ky.) – Supporters of public school choice hope a planned rally for Saturday at Grace on the Hill Church at 2 p.m. (eastern) will send a clear message to Knox County officials, who recently ended a longstanding reciprocal agreement with the Corbin Independent Schools.

The latest in the growing story of Knox County Public Schools killing parent choice with the Corbin Independent Schools involves a Knox claim that Corbin turned down an application from a special needs student.

Not so, according to Jackie Frost, the child’s mother. Ms. Frost had the courage and honesty to go public with the story.

I’m not a lawyer, so I’ll just wonder if a material error like this could really hurt Knox’s case.

Blogs you may enjoy…

Here are some blogs to glance at over the weekend…

Quote of the day…

“In Washington, a man gets up to speak and doesn’t say a thing, and the other men disagree with him for three hours.”