Are your representatives as careful with your family’s money as they are with theirs?

So here’s a question to ponder today: Do you think your representatives (both state and federal) spend their families’ money like they spend your family’s money?

See, most families can’t spend money they don’t have.  Kentucky is facing a $1 billion budget deficit this year.  That’s an incredible amount for a state the size of Kentucky. Stop and think about that for a second.  We are committing ourselves to spending $1 billion more than we have available.

Now, when most responsible Americans take a look at their finances, they understand that you can’t spend what you don’t have AND if you do it will eventually catch up to you.

So the question I would ask our legislators is: how do they spend their families’ money? If their spending habits in the legislature are any reflection of their families’ financial plans, we are sure to have quite a few experiencing serious debt problems.

Remember, the government can only spend what it takes from hard working taxpayers. It is our right and responsibility to hold lawmakers accountable for how they spend our money.

Race to the Top scoring may not determine final awards

Kentucky’s education leaders really knocked themselves out putting together our application for the Race to the Top federal education funding competition. Except for the glaring omission of charter school legislation, the state’s edu-team tried everything they could think of to garner every possible point in the published scoring scheme.

“…the ultimate power rests with Mr. Duncan, who will have the final say in awarding those cash prizes. But if the secretary deviates from the highest scores in awarding the Race to the Top grants, department officials have said he pledges to justify his reasons.”

In other words, US Secretary of Education Arne Duncan can do what he wants no matter how the scores come out.

So much for a fair part of the effort expended to get us the maximum points possible.

And, maybe, since it is well-known that the Secretary really favors charter schools, Kentucky’s refusal to implement them may turn out to be a deal breaker, points or no points.

Feds have their Toyota bashing pedal to the metal

Ray LaHood, U.S. secretary of Transportation, suggested Toyota drivers ‘stop driving’ their vehicles, something he later called a ‘misstatement.’ How would his ‘misstatement’ have set with the Jimmy Hoffas of the world had it been pointed at a unionized, bankrupt, government-owned American operation?

Imagine the UAW’s disdain had House Energy and Commerce Committee Chairman Henry Waxman, D-Calif., taken aim at, say, Chrysler with the same vigor displayed in his attempt to weaken Toyota.

Rally for school choice in Corbin – Education is a ‘civil right’

– But, across the state, Kentucky isn’t meeting the responsibility

The Times Tribune reports that those who attended the school choice rally in Corbin this past weekend witnessed a powerful melding of interests from different groups and different regions of the state who now realize they share a common goal – securing better educations for all kids, regardless of wealth status or racial backgrounds.

Speakers including our own Jim Waters and Pastor Jerry Stephenson, president of the Kentucky Education Restoration Alliance and pastor of Midwest Church of Christ in Louisville, pointed out that parents in the rural Knox County/Corbin area of the state are not alone in their concerns about children being left behind. There are remarkable similarities to issues and concerns in the state’s largest urban school system in Louisville and in other districts where similar agreements have been cancelled in the past few years.

The rally covered a number of specifics including funding differences and extremely different educational outcomes for the Knox County Public Schools and the much better performing Corbin Independent school system, as can be seen in this comparison of high school 10th grade score results for the lone high school in Corbin and the two high schools in the Knox system. 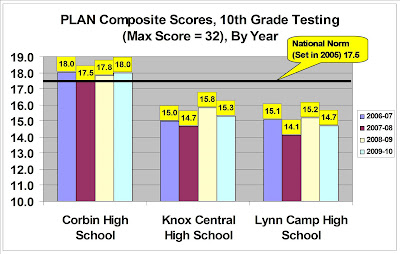 Recently, Knox County summarily cancelled a three-decade old student transfer agreement that allowed parents of both school systems to freely choose to send their children to a school in either district.

For more on the rally, check out the Times Tribune, which has been running great coverage of this story, and stay tuned to the Bluegrass Policy Blog, as well.

The Kentucky General Assembly only has 23 more days to cause trouble. Reach out to your representatives and tell them you want a responsible, transparent, accountable, lean, efficient, and limited government!

You can find your legislator’s contact information on this page by selecting you the county you live in! Take just a few moments to send them an email and remind them of what they are in Frankfort to do: represent you.

You propose to remove the U.S. from NAFTA. Your stated reason is that the freer trade made possible by NAFTA destroys jobs in your state.

If you’re correct – that is, if it’s true that preventing people in one political jurisdiction from trading freely with people in other political jurisdictions generates higher-paying jobs and more widespread prosperity for those people who are denied the freedom to trade freely – then your proposal is too modest. You should instead introduce legislation that permits each of the 50 states to impose high tariffs not only on goods from jurisdictions such as South Korea and Mexico, but also on goods from jurisdictions such as South Carolina and Michigan.

Think of it! No longer, for example, would Mississippians ship dollars out of state in return for cars imported from Detroit. You’ll keep those dollars at home, and as a result get a booming, high-tech manufacturing industry – and, to boot, also get rid of the large and growing trade deficit in motor vehicles that has long plagued your state.