State of the Union: we want to hear your thoughts!

President Obama addressed the nation Wednesday to discuss the state of the Union and while Washington D.C. is hundreds of miles away, the policies that are debated and enacted there affect Kentucky on a daily basis. 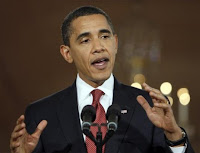 So we want your thoughts about the State of the Union address!

Reply to the comment section in this blog post with your thoughts!  How do you feel about:

Democracy thrives on healthy discussion and we would like to know what you think!
We’re all ears!

Yes, Virginia – What your teacher thinks about math does matter

ABC News is reporting on a new study that says girls are good at math, but teachers may make them anxious about it.

Math anxious female teachers are passing along their phobias to the girls in the classroom. Boys, somehow, are not so impacted.

This is an important issue because about 90 percent of elementary school teachers are females.

Also, at least in Kentucky, a teacher can be certified as an elementary school teacher after taking only one math course in college – a course called “elementary math” that is taught below the level of college algebra. That makes elementary education a haven for math phoebes who cannot pass the math requirements for other college degrees (none of the other degrees accept “elementary math” as an acceptable credit).

Corbin Independent – Not ‘gonna’ take it lying down!

It looks like the Corbin Independent schools are not going to just stand by while the Knox County schools revokes a long standing student transfer agreement.

If that doesn’t work, it’s the courts.

Why would parents prefer Corbin schools over Knox County schools?

Here’s why: just look at the high school No Child Left Behind performance in the two districts. 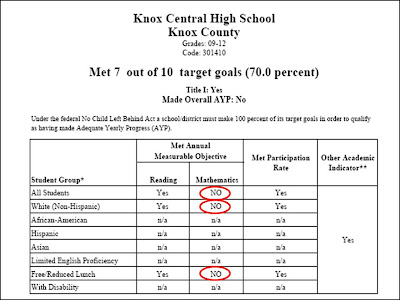 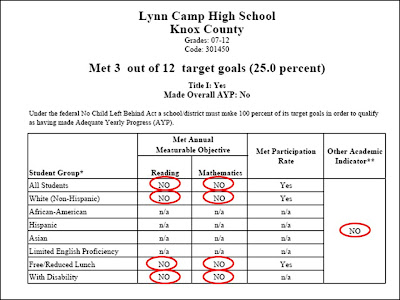 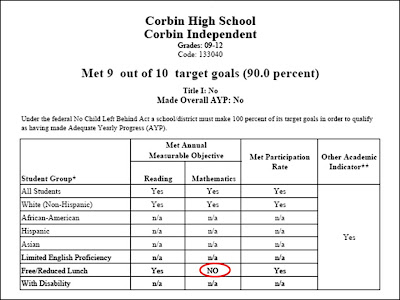 Most kids in Knox County don’t.

During direct questioning about House Bill 176 from members of the House Education Committee, Kentucky Commissioner of Education Terry Holliday named 12 schools that would be identified as “Persistently Low-Achieving Schools” if the bill’s ‘Race to the Top’ rules were in force today.

Dr. Holliday really had no choice but to release the names in this meeting, which took place on January 7, 2010. Legislators directly asked for this information, and there was no reason not to provide it.

Never the less, the Kentucky School Boards Association reports that four days later, on January 11th Dr. Holliday apologized to the state’s school superintendents for releasing the names and vowed to “visit every one of those schools we named and apologize to those faculties.”

Then, signals flip-flopped again on Tuesday, January 19th when Commissioner Holliday was a guest on the launch show of KET’s new ‘Education Matters’ series.

During the course of this show, questions came up about how schools will be held accountable in the future. The following exchange took place.

First, Commissioner Holliday said, “We will rank all of the schools in the commonwealth by their combined math and reading proficiency scores.”

Then, show host Bill Goodman asked, “When will that begin?”

Holliday replied, “Well, it’s already begun. We gave a list of schools last week that we said – if this were in place today – here are the schools, the 12 schools, that we would be providing assistance to under the turn-around model.”

It certainly sounded like Dr. Holliday was happy about – even taking credit for – releasing the names of the 12 schools.

Listen to the KET archived version of the show starting at 44 minutes and 2 seconds into the broadcast and decide for yourself if Dr. Holliday conveys an impression that the names release was a positive event.

And, another flip-flop seems to have occurred.

On Monday, January 25, 2010 Commissioner Holliday apologized for releasing the 12 schools’ names – again – this time to officials at the Caverna Independent School District.

Here’s what the commissioner said at a press conference following his tour of all the Caverna schools:

“Let me make it real clear upfront. No one is coming in here to close Caverna High School down. I think you’ve got a lot of the right strategies in place here at Caverna High School. We just really regret this list of schools got published ….”

I know the commissioner regularly reads this blog, and I freely admit that I am human and may be missing something here. Perhaps he can clarify what comes across to me, anyway, as mixed signals.

In any event, I think it was important for legislators and the public to know which schools were likely to be identified. That way we could see how the new RTTT-based rules would really work.

And, as I pointed out in an earlier blog, I have some serious reservations about whether this new program will focus attention on the proper schools. Without a sample list of schools to examine, that important discovery could not have been made.

I think something else needs discussion. The public schools don’t belong to school administrators. They belong to the people of Kentucky. Public schools should not enjoy the kind of secrecy and protection that some in the school system clearly yearn for.

The public needs and deserves complete information about its school system. We aren’t talking military secrets here, and there simply is no justification for withholding the information.

It’s the public’s data, and attempts to withhold it from the pubic – and from the legislature, for that matter – can adversely impact credibility of the public school system. Such secrecy has no place at this time when state and federal leaders are promising increased government transparency.

Right now, I don’t think it’s appropriate for local school administrators to put the Commissioner of Education on the spot to apologize for answering entirely pertinent and valid questions from our legislators. If I am missing something here, I hope Dr. Holliday will check in and set me straight.

It’s a sad tale. Parents want a choice so their kids can have a chance. But it’s the board that has the power.

If Kentucky had a charter-school law, the parents who eloquently make their case for choice in this video would be empowered to make the best decisions for their children. It’s becoming more apparent every day: Parents, not board members, bureaucrats, budgets or zip codes, should determine where children are educated.

“I don’t see it coming up again,” Knox Co. board member Sam Watts said after the meeting. “It’s really a business decision, because you’ve seen how much we’re losing, and we don’t know from year to year how much more we’re going to lose. I hate it for the parents who send their kids over (to Corbin), but I feel it’s the best decision for Knox County school system.”