Quote of the Day: What Would Jefferson Say?

UncategorizedBy Jim WatersMarch 23, 2010
Speaker Pelosi probably thinks this quote is some kind of joke. But the third president of the United States was not cackling when he said:

“The care of human life and happiness, and not their destruction, is the first and only object of good government.” –Thomas Jefferson

I wonder how “death panels” jibe with “the care of human life and happiness, and not their destruction.”

WAVE-3 reports that House Bill 301, which will raise the minimum high school dropout age in Kentucky, passed the Kentucky Senate Education Committee today, but not until it was amended to delay implementation of the higher age requirements by a year.

While I am not sure that this bill is the right answer to the state’s dropout problem, I am very confident that the real number of dropouts is much higher than the “official” number of 6,500 which the WAVE-3 item mentions.

The state’s dropout reporting was officially audited in 2006 and found to seriously under-report the true number of dropouts.

Other, more credible calculations, which center on high school graduation rates, not dropouts, indicate Kentucky understates the true number of dropouts by somewhere around 60 to 100 percent.

Next year, the Kentucky Department of Education will drop its current, inaccurate dropout reporting and switch to a better graduation rate formula for school accountability. The data will get better still around 2013 when our new student tracking data system called Infinite Campus is supposed to be on line long enough to support really high grade reports.

A preview of the Bluegrass Institute’s Capitol Briefing on environmental issues will air this afternoon on “Drive Time” on 930 WKCT-AM, Bowling Green’s news-talk station.

Paul Chesser, special correspondent for the Heartland Institute, who is speaking at a Bluegrass Institute legislative forum on Wednesday in Room 113 of the Capitol Annex in Frankfort at 11:15 a.m. (RSVP here to attend), will address a radical climate change panel that has come to Kentucky and is operated and funded by environmental extremists.

The show is hosted by Chad Young and is streamed live here.

Chesser will also appear on “KY. GrassRoots Radio” from 7:30 to 8 p.m. tonight. Listen here. The show is hosted by Matt Singleton, Clint Hardy and David Caldwell.

Will Kentucky lawmakers keep their oath to preserve the Constitution, protect their constituents?

Brooke Rollins, President & CEO of the Texas Public Policy Foundation made this prediction regarding Sunday’s assault on Americans’ freedom via health care legislation in Washington:

“The president and congressional leaders have said they know better than the American
public—dismissing public opposition in the name of socializing our health care
system, betting that the public will support their efforts once the bill has passed.
But they are wrong and will quickly see that they have stirred an anger that will
only grow, as people recognize their freedoms are slipping away.”

Rollins may be right. But Kentucky legislators should take no chances.

A proposal in the Kentucky House to protect citizens from federal government health care and insurance mandates has been stuck in the Banking and Insurance Committee since Jan. 26.

Now, just after the big-government goons in Washington beat up liberty and freedom, would be an opportune time for Kentucky lawmakers to preserve the Constitution they swore to uphold and defend the constituents they pledged to protect.

Of course, Washington’s ruling thugs long ago trashed the Tenth Amendment of the U.S. Constitution they swore to uphold. And the wishes of their constituents? They were never considered.

As expected, Peggy Petrilli, the principal who was removed under highly questionable circumstances from the Booker T. Washington Academy in Fayette County in 2007 has filed an appeal to her original lawsuit.

As we reported, the Kentucky Department of Education just returned a decision concerning allegations from Petrilli’s school district that she cheated on CATS tests. The department found the evidence lacking to support such charges and has closed the case.

Armed with this new evidence along with a large number of lingering questions about the conduct of her first trial, Petrilli now goes forward with her lawsuit.

Latest details in the Herald-Leader here.

More questions raised about the Race to the Top related audits

WBKO.com is carrying the latest set of questions about some of the ten schools that were recently officially tagged for school audits that may have real consequences for schools.

The two schools complaining to WBKO are both considered “Non-Title 1 Schools” under the criteria used by the new Race to the Top formula adopted by the Kentucky legislature in January. That means they get relatively little federal support money from the federal Title 1 program. In other words, these are not high poverty schools by Kentucky standards.

That leads to a further discussion about why we are going to spend a lot of extra money in these two schools over the next three years – $1.5 million each – while other, clearly lower-performing schools won’t get a dime.

Click the “Read More” link to see some schools that won’t get a dime but definitely should be ahead of Caverna and Metcalfe if we are going to spent big bucks to turn around only a few schools.

First, look at the most recent No Child Left Behind summary for Caverna High School. 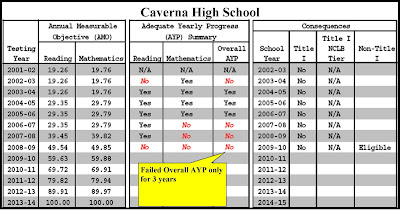 With one hiccup in the 2002-03 school year, Caverna consistently made Overall Adequate Yearly Progress (AYP) until just three years ago. Caverna’s 2009 average proficiency rate for reading and math combined was 37.39 percent. That’s really bad, but hold on.

Here is a similar table for Metcalfe County High School. 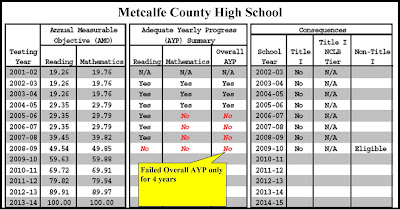 Metcalfe started to falter four years ago. Its combined proficiency rate averaged across reading and math was 35.15 in 2009.

Now, consider some schools that had a notably lower combined (averaged) proficiency rates for reading and math, but which ARE NOT in the running for either the management audits or the huge supplemental turn-around funding.

Here is the NCLB summary for one such school, Iroquois High School in Jefferson County. 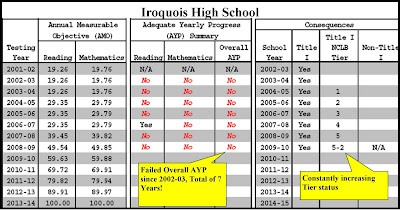 Why is this school not going to get $1.5 million in extra support money or a management audit to see if the leadership in the school knows what it should be doing? In 2009 this school’s combined math and reading proficiency rate average was only 31.40.

Or, how about the Holmes High School from the Covington Independent School system? This school apparently is skating because it has been constantly reconstituted by shifting grades around. But, the same, terrible Overall AYP performance has been going on ever since NCLB tracking started. But, no audits, no extra money for this school, either. Holmes averaged proficiency rate in 2009 – 28.58 percent. 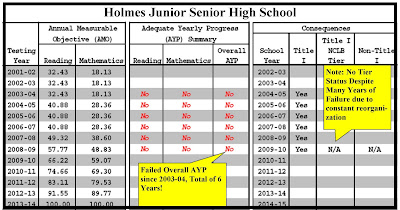 Finally, here is NCLB summary for the Deming High School in Robertson County. 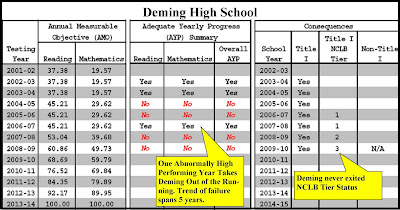 This school actually showed on the trial run of the Race to the Top accountability formula back in January but somehow disappeared from the actual accountability list. Maybe that is because the actual list suddenly shrank from 12 to just 10 schools.

Anyway, Deming’s averaged math/reading proficiency in 2009 was a dismal 26.84 percent. Deming got lucky on NCLB in 2006-07, but it is clear that the school has basically been on the skids for Overall AYP since 2004-05, a five year period.

So, what do you think? If we can only spend extravagantly in just 10 schools, did our educators from Washington and Frankfort wind up selecting the right 10 schools?