The Kentucky Department of Education claims that the billions spent on public schools is paying off. The data suggests taxpayers don’t get nearly enough bang for the buck.

Here’s another You Tube that shows what can happen in a really bad school when a state has really good charter school laws.

This story even got the attention of the US Department of Education.

Western’s Public Radio reporter Lisa Autry interviewed me for a two-part series on a legislative proposal to ban “texting” while driving. The series begins Tuesday at 5:50 a.m. and 7:50 a.m. (CST). We will be heard in Part 2 of the series on Wednesday at those same times.

Even liberal lawyers tell me this is a bad bill.

Here’s my recent “Bluegrass Beacon” column on the issue: “Text message to Jody: R U 4 real?”

If your local newspaper doesn’t yet carry my column, please request that they begin doing so. 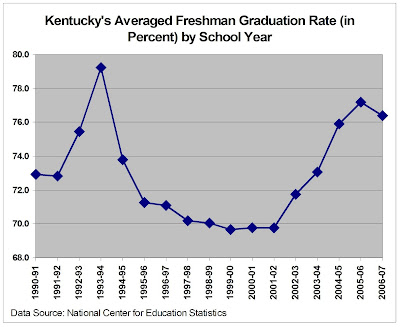 Herald-Leader reporter Ryan Alessi does a good job covering most of the details at the Bluegrass Politics Blog so I won’t reinvent the wheel here.

However, one of the meeting’s comments from Representative Reginald Meeks (D – Jefferson County) really caught my attention. Meeks was discussing his bill, House Bill 301, to raise the dropout age. Said Representative Meeks:

“Give us an opportunity to build the kind of educational system in our commonwealth that – rather than facilitates young people dropping out – keeps them, makes them want to stay in and be better prepared to, to live a good life after high school.”

Imagine that. After almost 20 years of KERA, we STILL have high schools that don’t engage kids and make them want to stay on board to a diploma. Instead, per Representative Meeks, we still have schools that facilitate dropping out.

Whether House Bill 301 is the right answer is open to debate (which will continue in the House Education Committee next week, by the way). Forcing kids to stay in school isn’t engaging them, and it won’t necessarily lead to better educations.

We’ve been covering the loss of parental choice options because of the Knox County Public Schools’ recent cancellation of their long-standing student transfer agreement with the Corbin Independent School District since January.

Initially, it looked like around 160 or so kids would be forced to return to Knox County schools, but a new announcement says that number is in serious error.

The problem is that the Infinite Campus student tracking computer system (which we have raised concerns about before such as here, here and here) had many address errors.

Now, it looks like over 400 students are impacted, which could cause serious repercussions for the Corbin Independent School District if it looses that many students.

According to enrollment data from the Kentucky Department Of Education’s Growth Factor Report, Ethnic Membership By District And Grade, for School Year 2009-2010, the entire enrollment in Corbin Independent was only 2,681 students for that recent school term. If this small district suddenly looses over 400 students, the sudden enrollment drop of 15 percent could be devastating.

If those kids were being forced into a better school system, this might be justified, but as we have pointed out before, when it comes to graduation rates, middle school EXPLORE and high school ACT test scores, No Child Left Behind performance, and increasing performance and participation on the Advanced Placement tests, the facts are that Corbin Independent provides a much better education than Knox County does.

Given the sudden surprise about how many kids are impacted, look for this battle to get even more heated as Knox County’s lust for power faces off against what is best for (a lot more) students.

Are you concerned about transparency in government, the lack of accountability in our elected officials, or the failing education system in Kentucky?

Have you used FreedomKentucky.org to access information about Open Records Requests, school school performance data, or the 2010 Kentucky General Assembly?

We need your help! We want to spread the word about the FreedomKentucky project! We are looking for citizens and organizations to link to FreedomKentucky.org so that we can create more visibility about government transparency and accountability in Kentucky.

This blog post contains the FreedomKentucky.org logo which can be used!

Thanks in advance, liberty lovers, for your help!