The National Assessment of Educational Progress (NAEP) reading results for 2009 have been a subject of a number of previous posts. In this one, let’s look at the black-white achievement gap.

This graph is largely copied from a 2007 NAEP report titled, “How Black and White Students in Public Schools Perform in Mathematics and Reading on the National Assessment of Educational Progress,” except that I added in the 2009 data. That 2009 data comes from the 2009 NAEP Reading Report Card. 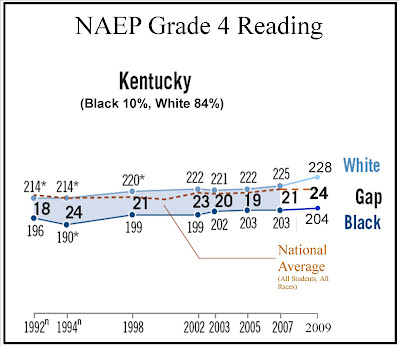 Very simply, the reading gap between Kentucky’s fourth grade blacks and whites has jumped around over the years, but the new 2009 figure matches the worst ever recorded by the NAEP.

This next graph shows what is going on in eighth grade reading.

Again, the gap has been jumping around, so a real trend is hard to spot. However, the 2009 gap is larger than the gap back in 1998 when eighth grade reading was first assessed by NAEP. 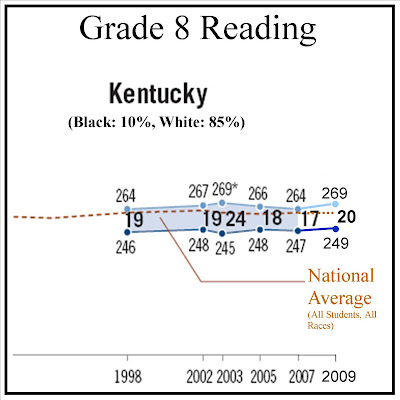 Kentucky’s whites scored two points below the white national average in 2009 and the state’s blacks scored four points above blacks across the country. Still, our gap hasn’t materially changed since the first days of NAEP grade eight reading tests.

“The recession may be claiming a new victim: the 5-10-mph “cushion” police and state troopers across the USA have routinely given motorists exceeding the speed limit.

As cities and states scramble to fill budget gaps with revenue from traffic citations, “not only are the (speeding) tolerances much lower, but the frequency of a warning instead of a ticket is way down,” says James Baxter, president of the National Motorists Association, a Wisconsin-based drivers’ rights group that helps its members fight speeding tickets.”

This interview was conducted with Rep. Tim Moore, R- Elizabethtown about nuclear energy in Kentucky.
http://vimeo.com/moogaloop.swf?clip_id=10435875&server=vimeo.com&show_title=1&show_byline=1&show_portrait=0&color=&fullscreen=1

If Kentucky wants to successfully compete for the second round of Race to the Top stimulus funding, education experts say it should pass a charter school law.

“Stimulus or not, Kentucky should be adopting charter schools because it’s the right thing to do,” said Richard G. Innes, education analyst for the Bluegrass Institute, Kentucky’s free-market think tank.

The institute has led the effort to bring charter schools to Kentucky, which is one of only a few states without a charter law.

Why Kentucky lost Race to the Top: No charter schools

If legislators had listened to us, and to the people running the federal education Race to the Top (RTTT) funding sweepstakes, Kentucky would have already enacted a charter school law and the end result would have been an easy win for us.

You see, with the extra 30 to 40 points that charters would have given us in the RTTT competition, we would have exceeded the scores of at least one of the two winning states.

Instead, we now face an uncertain future in the Phase II RTTT competition as our education commissioner scrambles to get emergency legislation for charter schools in place.

And the Courier-Journal’s ‘take’ here.

By the way, according to these news articles, Kentucky got a RTTT score of 418.8 while second-place winner Tennessee (which does have charter schools) got a score of 444.2.

There seems to be some confusion about exactly how much the lack of Kentucky charter schools cost Kentucky (the Courier article indicates 40 points, the Herald-Leader says Kentucky Commissioner of Education Terry Holliday says it was only 32 points), but in any event Kentucky would have won a RTTT award if it had charter schools in place.

In RTTT Round One Kentucky asked for $200 million. Now we have lost at least $25 million because our Phase II award is limited to $175 million. However, we probably won’t get a dime from Phase II if our legislators don’t finally institute some real education reform by setting up a charter school program in Kentucky.

Help put parents back in charge of their children’s futures

For too long, Kentucky parents have had to settle for the status quo in their children’s public education. It’s time to put parents back in charge of their kids’ futures.

Thirty nine other states allow for charter schools – independent public schools that are run locally, with input from parents and members of the community.

It’s time to ask our Kentucky lawmakers – “Where are our independent public schools?” We have a unique opportunity right now to give back Kentucky’s public education system to the people of Kentucky.

Click here to tell your legislator – now is the chance to get this right.
Let’s not settle for anything less than the best for Kentucky students.