Join us at the Owensboro Tea Party this Saturday

Join the Bluegrass Institute at the Owensboro Tea Party this Saturday. Jim Waters, director of policy and communications, will speak at the event being held from Noon to 2 p.m. at Owensboro City Hall, 101 E. Fourth St.

KERA at 20: The drop in Kentucky’s education bang for the buck with ACT

I’ve been blogging about some of the statistics in Kentucky since KERA was enacted.

I started with a discussion of the huge increase in education revenue that resulted from KERA-induced higher taxes.

I then noted how we are getting less ‘Bang for the Buck’ today in the National Assessment of Educational Progress’ eighth grade mathematics exams than we did in 1990.

Today, let’s look at how Kentucky’s ACT Composite Scores from this well-known college entrance test compare to the education revenue collected when KERA was starting versus today. 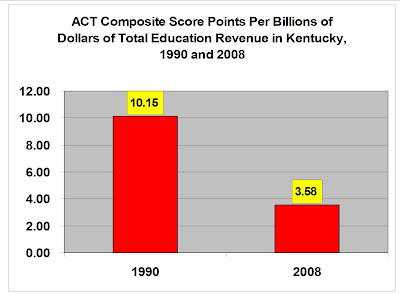 As you can see, there was a very notable decline in the efficiency of our dollars in producing better ACT scores over time.

By the way, I know that someone is going to point out that not as many students took the ACT in 1990 as in 2008. They will claim that could impact the data in the graph. It could, a little, However, you might be surprised to learn that the difference in the proportion of Kentucky public school graduates taking the ACT over this time really isn’t that great.

I estimate in 1990 that 57.6 percent of Kentucky’s public school graduates took the ACT, while in 2008 the exact percentage (not an estimate) was 64.2 percent, which is not that much higher (Learn how I made this estimation by clicking the “Read more” link below). This relatively small change isn’t likely to be an adequate explanation for the very sharp efficiency drop shown in the graph.

The bottom line here is that just as happened with the National Assessment of Educational Progress, we have to spend a lot more today for each point of performance on the ACT Composite Score our kids get. That isn’t efficient.

I don’t have the full data on the 1990 ACT for public school students, but I do have complete data from 1993 and later for several different breakouts of ACT performance, including public school scores and participation numbers only. You can find that here.

From the known total number of 1990 ACT tested graduates in Kentucky, which included all students, I subtracted the number of non-public school graduates that are known for the class of 1993. I estimated this is a reasonable approximation of the private school participation in 1990 as well as 1993 because the non-public school graduate numbers were fairly stable in the time period from 1993 to 1996.

The results are summarized in this table.

Notice that participation on the ACT for public school graduates didn’t rise very much from the time KERA was enacted through 2008.

In 2009 public school participation on the ACT became mandatory for all Kentucky public school students. That 100 percent participation rate created a sharp break with Kentucky’s past ACT trend line, and that is why I only ran my analysis of ACT performance from 1990 to 2008.

Kentucky Graduations: KDE paper records for 1990. From Transition to Adult Life, Table 3a, in 2009 Non-Academic Briefing Packet from KDE for 1993 and 2008

“The one thing that we can be sure of is that a continued assault on poker and attempts to restrict the rights of Commonwealth residents to play online poker is a clear waste of state government’s scarce resources.” — John Pappas, executive director of the Poker Players Alliance

A TEA party will do citizens good

Jim Waters, director of policy and communications, will be speaking at tea parties in Owensboro (this Saturday, April 10), Madisonville and Paducah (both on Thursday, April 15). Please come out and show your support for lower taxes, limited government, state sovereignty and individual liberty.

Madisonville Tea Party: At the corner of N Main St and West Arch St across from the Government Center beginning at 2 p.m. Thursday, April 15

Attorney General Jack Conway calls a letter signed by 35 Kentucky lawmakers asking him to join 14 other Attorneys General in a lawsuit to protect Kentuckians from the unconstitutional federal health care policy ‘a political stunt.’