It’s time for politicians and editorial writers to put aside their uninformed bias and support charter schools for Kentucky children.

“Far too much education research—including much of it that is done in universities—is driven by the interest and theories of the researchers themselves and not the needs and problems of practice.”

“That has to change.”

This sounds a lot like Arthur Levine, and even me. 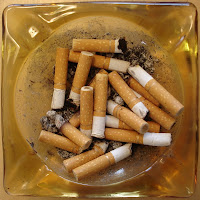 Don’t let this happen in Kentucky!

Close call in Florida, though. The Brooksville, Florida city council decided not to go ahead with a comprehensive smoking ban for all city employees. This would have restricted all city employees from smoking – even during non-work hours, in their free time. The ordinance attempted to deny job applicants who admitted to using tobacco and force current employees to quit using tobacco or risk losing their job.

We have a number of problems with the functioning of the current staff seniority program in Kentucky’s public schools. One major problem is that older teachers get to stay regardless of whether or not they produce good results with students.

But, as Kentucky faces serious fiscal stress, a 2009 paper from the Center for Reinventing Public Education (CRPE) highlights another facet of the issue: seniority means more teachers and other school staff have to be laid off when budgets must be cut.

Table 2 in the CRPE report shows how this works. The far right column in the table (highlighted) shows the extra school staff cuts that will result when education salaries must be cut by the various listed percentages. 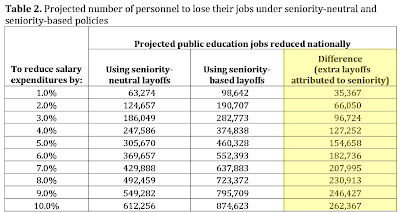 The reason this happens is simple. When you have to cut a certain number of dollars from the budget, you have to cut more lower-paid positions than would be required if some higher-paid, but lower performing, personnel were eliminated.

As we await a call for a special legislative session to finally produce a state budget, talk of cuts is being heard everywhere. If schools have to take a hit for the budget to balance, teachers need to know that their own seniority rules will force more of them out of work. And, legislators need to understand that the continued use of blind teacher seniority will cost more Kentuckians their jobs while it won’t necessarily keep the state’s best teachers in the classroom.

By the way, a similar effect can be expected in any area of the state where seniority controls jobs.

Hat tip to Education Week’s K-12 Politics blog for pointing us to this report. 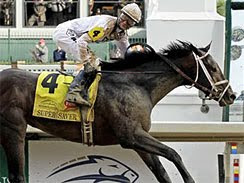 “Super Saver” won the 136th Kentucky Derby today at Louisville’s Churchill Downs. Wouldn’t that be a great description for the commonwealth’s government? But only if it were true.

Do charter schools really cause segregation?

There’s a smokescreen of allegations that charter schools are leading to school re-segregation.

Now, a University of Arkansas team takes a look at one specific example of the shaky research behind such claims in a new article in the Summer 2010 edition of Education Next, “A Closer Look at Charter Schools and Segregation.”

“A Closer Look” takes strong issue with the methodology of another recent report from the UCLA-based Civil Rights Project (CRP), claiming that study’s “flawed comparisons lead to overstated conclusions.”

In one, easy to understand example, the Arkansas team points out that if you are looking for data on segregation, you cannot fairly do the job by comparing student demographics of inner city Washington DC charter schools to the demographics of upscale suburban schools that surround Washington. 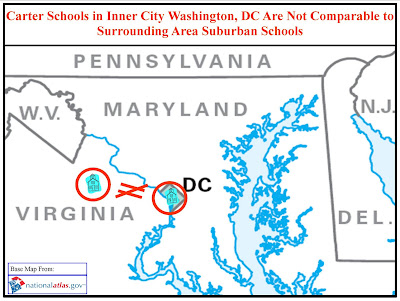 You have to compare ‘apples to apples’ by looking at the demographics for typical public schools that serve the same population within Washington, DC. Once that is done, assertions about segregation start to crumble.

The University of Arkansas team points out that throughout its analysis of charter schools around the nation, the UCLA crowd’s mistake is to compare charter schools, which are predominantly found in inner city locations that have high minority populations, to much broader geographic areas where far more whites are located.

The Arkansas team provides interesting data that shows this is a very inappropriate comparison. Once inner city charter schools are compared to typical public schools that are also from the inner city, most of the racial gaps between charter and traditional public schools disappear. This graph from the Education Next article shows how that works. 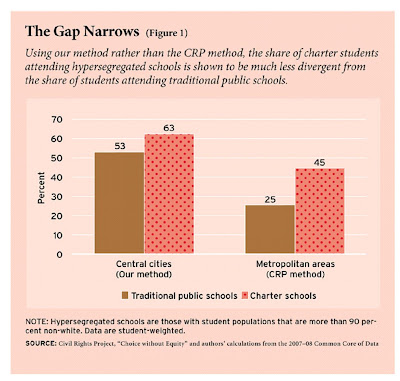 The two sets of bars on the left show there isn’t much difference in the segregation rates of either typical public schools or charter schools in the inner (central) city. In both cases, there is very high minority presence. In contrast, the set of bars on the right of the graph show the flawed method used by the CRP crowd at UCLA identifies less segregation in both systems but also indicates a much larger gap between charters and typical public schools.

Sadly, this argument highlights yet another case where poor education data hampers understanding. The Arkansas team admits that the available data still isn’t good enough to do a really high quality ‘apples to apples’ comparison. The Arkansas team says that even the gap they show in the left bars of their graph would probably be reduced even more if a better set of data were available. Such data would allow precise tracking of all charter school students back to the typical public school they would otherwise attend.

So, here is another example of how educators are failing to produce the data we all need to analyze how our schools are doing. The lack of that data is leading to smokescreens and confusion about many important education questions including this one about segregation. Considering the huge amount of money we now spend on our public schools, such poor research is simply unacceptable.