Why Kentucky needs charter schools: KERA has failed too many students for too long 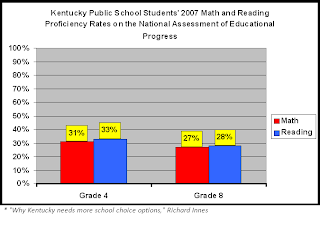 After two decades of KERA, federal testing shows that – at best – only one in three Kentucky students is proficient in reading and math.

Charter school in Chicago sending all its graduates on to college 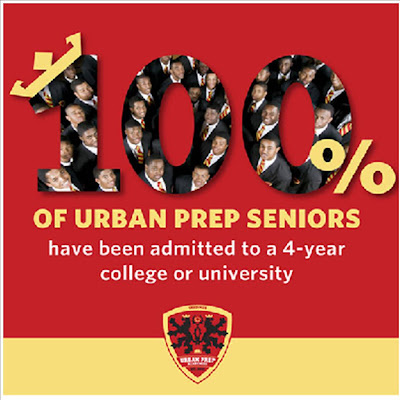 All 107 seniors in Chicago’s all-male The Urban Prep Charter School are heading to college – four-year colleges.

Even the prestigious Louisville Male High School only graduated 98.7 percent according to its 2008-2009 School Report Card (Available from pull-down menus here). And, only 92.6 percent are going on to either two- or four-year colleges combined.

By the way, Male is a magnet school that accepts academically strong students through a competition.

Urban Prep uses a straight lottery to admit students. Any applicant has an equal chance of admittance.

Only four percent of Urban Prep’s seniors could read at grade level when they entered the school as freshmen. So much for claims that this school skims the cream.

There are more interesting comparisons. Urban Prep’s students are 82 percent low income. Based on data in Louisville Male’s School Report Card for 2009 reading, Male’s low-income rate is only 24.8 percent.

Certainly, Urban Prep’s ACT score average is much lower than Male’s, but this charter school still has something great going on if every one of its seniors got into a four-year college.

Don’t we need that sort of educational excitement in Kentucky?

There has been a sharp increase in education funding in the Bluegrass State since KERA began yet little progress to show for it.

To achieve a 90 percent proficiency rate in math would cost well over three times the amount currently spent.

Will the same thing happen in Kentucky?

The Courier-Journal reports that the Indiana Department of Education is cancelling its efforts to win Race to the Top Phase 2 dollars, citing a lack of cooperation from the state’s teachers union.

The apparent sticking point is a plan to include a teacher evaluation program as part of that state’s education reform agenda.

The article says Andy Smarick from the Thomas B. Fordham Institute says, “Other states are having big problems with their unions,” as well.

That could work to Kentucky’s advantage IF our teachers chose to take the high ground by getting on board for real changes that will ultimately work better for students and for the improvement of the profession of teaching, as well.

State government should ‘bare’ all to make the grade

The Beshear administration is doing a lot of crowing about a new report praising Kentucky state government for its transparency. But it’s much ado about nothing.

Principals in West Virginia are stepping down

I wrote yesterday about the ten schools Kentucky identified for the federal School Improvement Grant program and the fact that the principals in some of those schools will have to go.

It’s already starting in other states like West Virginia, according to the Charleston (WV) Gazette.

The question is, will it really happen here?