Holliday’s letter says there wasn’t enough evidence to establish the charges, and the investigation has been closed.

The letter has been posted by another blogger but the story goes deeper than coverage there or in the paper.

For one thing, the most recent state test results tend to bolster Petrilli’s case that she not only didn’t cheat at Booker T, but rather she actually produced remarkable progress at this very troubled school. Furthermore, she did it within two years of taking over. 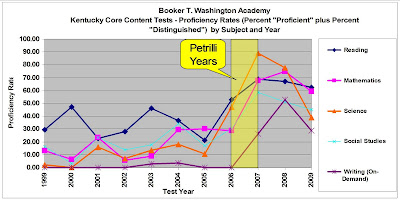 Prior to Petrilli’s assignment to Booker T. Washington in the 2005-2006 school year, this elementary school had very low and unsteady performance in the key Kentucky Core Content Test subjects of reading, math, science, social studies, and on-demand writing. The year prior to Petrilli’s arrival at the school, proficiency rates declined in every subject but math, which remained flat from the previous year. By any measure, this was a very troubled school when Petrilli was asked to go in and turn it around.

Once Peggy Petrilli arrived, the school’s performance solidly changed. Proficiency rates rose notably during her two years at the helm.

Even after she was fired, there appears to have been a “Petrilli Halo Effect” in the subjects of writing and math, which continued to show improvement for another year.

This halo effect is significant. It is highly unlikely that halo effect would be present if Petrilli had been cheating. Instead, all scores should have fallen dramatically right after her departure.

Sadly, by 2009, the halo effect ended as all scores in Booker T. Washington declined.

Furthermore, some unfortunate issues are surfacing about the formal investigation.

Petrilli and her lawyer inform us she was never officially notified that this investigation had been initiated at the Kentucky Department of Education. She only received some specific requests for information which never identified why that information was being requested. Also, six weeks after the letter closing the investigation was issued to Fayette County superintendent Silberman, Petrilli has not been informed that this case – which could have damaged her career in education forever – had been closed.

That seems remarkable considering the huge amount of public exposure this investigation generated.

Right now, it looks like the Fayette County School District fired a highly effective principal who was doing exactly what she had been asked to do, and doing it well.

Petrilli has a legal action pending about the firing. Things like the test results above coupled with the recent finding of innocence from the department of education could make it really hard for the district to withstand that suit.

Ultimately, the taxpayer may wind up footing another big bill because too often our education establishment doesn’t know how to identify, manage, lead and support really exceptional educators.

‘Tax reform’ must be accompanied by ‘spending reform’ to balance the budget.

Actor Drew Carey shot to fame with his nine-year sitcom “The Drew Carey Show,” which allowed him to express his love for Cleveland. “Cleveland Rocks” was the show’s theme song.

Carey has now taken that affinity for “The Cleve” – a nickname for the city from another TV show, “30 Rock” to a more important realm than sitcom city by focusing on how school choice is changing the lives of children in one of the poorest urban areas in one of the poorest big cities in the nation.

Not only is Citizens’ Academy outperforming nonminority students in other parts of the Buckeye State, but it’s doing so while receiving $5,000 less per pupil than its neighboring traditional public schools.

It’s not possible for such a school to exist in Kentucky right now, because educrats and their self-serving politicos in the Legislature have gone to the mat to prevent charter schools that would offer similar help to the commonwealth’s inner-city kids.

Yet while some things are different, the obstacles to growing school choice in Ohio are the same as in Kentucky: “politically powerful teachers unions are resistant to change,” says Reason.tv’s Nick Gillespie.

Even if that change “saves” children’s lives? Yup.

Corbin-Knox fight going to the next level

The dispute over the Knox County Public School District’s summary cancellation of a long-standing student transfer agreement has been an on-going discussion item here for months.

The latest news is that a recent decision from Kentucky Commissioner of Education Terry Holliday to freeze any further transfers is unacceptable to the Corbin Independent School District. The district’s local board voted late last week to appeal to the next level, the Kentucky Board of Education. If that appeal fails, it looks likely that this will elevate further to the courts.

This dispute could have implications that stretch far beyond the South-central area of Kentucky. School choice advocates from Louisville already declared common cause with the Knox and Corbin parents who want their long-standing school choice option to remain in force.

The Kentucky School Boards Association reports that Kentucky Commissioner of Education Terry Holliday will ask the Kentucky Board of Education to delay Kentucky Core Content Testing into late May. Holliday will do this even if the US Department of Education does not approve the inevitable late delivery of resulting test scores, which are used for No Child Left Behind accountability. It would also mean that, once again, schools will get scores back way too late to do anything intelligent with them to improve instructional programs next year.

Certainly, the problem of lost school days in some school systems is a serious problem, but we ran into the same issue last year and failed to learn a lesson from that.

Because no compensating plans were made after last year’s tests were delayed, our testing company still doesn’t have the slack to accommodate the testing shift and complete scoring on time.

It remains to be seen what the feds will do. If the feds decide that we should have planned better this year, one option would be to cut Kentucky’s federal education funds support. Given the condition of the state’s economy, that could really hurt.

If you haven’t already heard, Kentucky House Speaker Greg Stumbo threatened all the state’s representatives with loss of local school building projects if they didn’t vote for his bad idea budget that burdens the state’s most financially stressed businesses with even more economic stress at this highly inopportune time.

Under the speaker’s misguided bully tactic, even if a legislator had some of the states worst condition schools in his district, school construction money would go elsewhere, to less needy school systems.

Now, the Daily News in Bowling Green has called the speaker out.