Do we need KACo?

During tight budget times, the questions should not stop with: Has the Kentucky Association of Counties (KACo) implemented the kind of internal controls that will prevent future agency officials from tucking taxpayers’ dollars in bikini strings and using KACo credit cards for escort services.

The question that must be asked, but isn’t — for obvious reasons — by Denny Nunnelley, KACo’s executive director and CEO, is: Why should taxpayers be forced to continue funding this profligately wasteful organization?

Like labor unions, KACo may have served a legitimate role when it began in the 1970s of providing insurance plans that county officials couldn’t find or afford. Like KACo president Michael Foster, Nunnelley doesn’t indicate whether KACo has even researched whether the private sector provides needed services at competitive rates.

As I asked in a recent Bluegrass Beacon column: Is it time to “right the ship or mothball it?”

But at least if KACo is allowed to stay afloat, would it be too much of taxpayers to ask that it do so without new $12 million digs, especially during the current economic downturn?

State Board of Education unimpressed

As the Courier-Journal reports today the Robert Frost Middle School in Jefferson County lost its appeal to keep its School Based Decision Making Council (often called the “Site Base Council”) self-governance authority.

This state board decision follows a March ‘Leadership Assessment’ audit that says Frost’s council, “…does not have sufficient capacity to manage the recovery of the school and recommends the council’s authority be transferred to the Superintendent.” That audit was triggered when Frost was identified as one of Kentucky’s 10 ‘Persistently Low-Achieving Schools’ earlier this year.

With its vote, the Kentucky Board of Education stood solidly behind Kentucky Commissioner of Education Terry Holliday’s earlier decision and the audit process instituted by House Bill 176 earlier this year. That was a plus for increased school accountability.

Some other news is more problematic.

Two additional pending appeals from Jefferson County Public Schools for other Persistently Low-Achieving Schools were withdrawn before the board heard them. Those appeals involved requests to keep principals in Fern Creek High School and Valley High School on board even though audits in those schools recommended their replacement.

The appeals to the board were dropped because Commissioner Holliday already granted approval for these two principals to remain for one more year while additional test and other performance data are collected.

However, the trend line of performance under these principals in these schools is already problematic. The table below shows the ACT’s PLAN test’s Composite Scores for all Jefferson County high schools that have a complete set of results for all four years listed. The negative numbers in the “Slope” column for both Valley and Fern Creek show that both schools experienced a decline in performance in college preparation between the 2006-07 and 2009-10 school years. 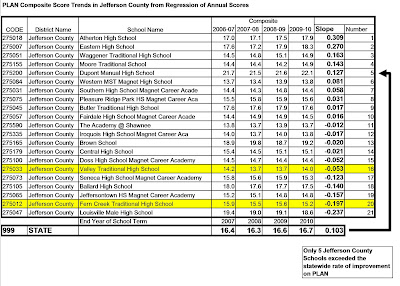 Thus, the wisdom of Holliday’s decision may be tested once those additional scores become available.

Note as well that overall, only 10 of the 21 Jefferson County high schools in the table have a positive trend. That is only 48 percent.

Statewide, 147 of the 222 schools that had four years of reported PLAN data had a positive trend, a factor of 66 percent.

In any event, each of the Persistently Low-Achieving Schools will have nearly half a million dollars of extra money to spend next year to try to improve things. It will be interesting to see if taxpayers and – most importantly – students get good bang for these extensive bucks.

• The newspaper’s claim: Calls made by the Knox County Public Schools superintendent to his school board members concerning the merger of the Lynn Camp Middle/High School and West Knox Elementary School were inappropriate and took place outside of a public meeting

They are keeping an eye on us…

I blogged yesterday on the excitement around our 2010 Open Records Project getting underway with the filing of over 30 records requests for superintendent performance evaluations in under-performing districts.  It seems the Kentucky School Boards Association has been keeping tabs; they were sure to inform their followers on Twitter… 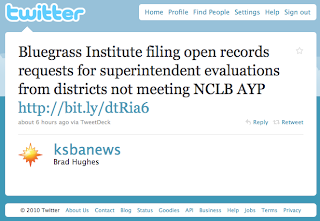 Yup! That’s us! The evaluations have already begun to pour in and I applaud the early responders! A few “interesting” pieces of information have already been picked out.

More information on this project in the coming days, stay tuned!

UncategorizedBy Rick LJune 9, 2010
Talk with the parents. They have love, stamina, dedication, tenacity and frustration. They don’t get much help. They battle the power of a complacent bureaucracy that isn’t held accountable to provide services mandated by law.
Kentucky legislators don’t have the courage to buck strong teachers-union lobbyists to offer these parents school choice.
Although it might be tempting for parents to let the system take over and allow service coordinators, evaluators and physicians make decisions about what is appropriate for their child, many can’t.
Why? No two children are alike. The special education evaluator sees only a snapshot of abilities and needs. The teacher sees only behavior in class, not outside of school. The doctor sees the child in a controlled environment.
Parents must fight for these children’s rights.
The Bluegrass Institute has a Special Needs portal on its wiki to help parents get started.
Watch a short video to better understand the steps and the challenges facing parents with learning disabled children.
Elected officials are very willing to let these families and children suffer. Are you? Will you stand up and help?

Why does Kentucky still have an income tax?