The Supreme Court is about to begin hearing arguments in an interesting case regarding government transparency and petitions.  At issue is whether the names on petitions are able to be obtained through open records requests.

You can read more here.

We would love to have your thoughts on the issue.  Let us know what you think!

Where Are The Jobs? 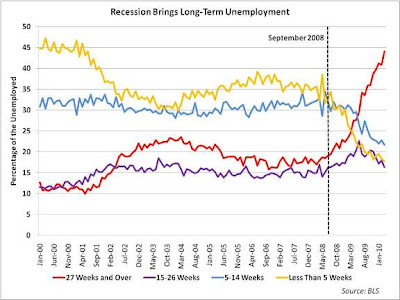 The Mercatus Center gives us a true picture of the state of our economy.

“Long-term unemployment has risen dramatically during the course of the recession – this increase is one of the most dramatic and important unemployment trends. In a healthy economy, we should expect to see a short duration of average unemployment. This signal indicates an economy where workers’ skills are transferrable and they are able to quickly move in and out of sectors of an economy in flux. During the 50 years from 1950 to 2000, this was the nature of unemployment in the United States, with an average of 12.4% of total unemployment lasting for periods less than or equal to 27 weeks.

This trend has continued unabated despite numerous jobs bills and policy interventions.”

“True liberty, by protecting the exertions of talents and industry, and securing to them their justly acquired fruits tends more powerfully than any other cause to augment the mass of national wealth.” –Alexander Hamilton

The percentage of Louisville students in NCLB failing schools varies notably by race.

Your stimulus dollars ‘at work’ in Louisville

Remember how we were promised that stimulus dollars would be used to get people back to work on “shovel ready” projects within 60 days?

Well, it’s been 14 months and Louisville’s “just getting ready to do sidewalks,” according to city Stimulus Czar Rick Johnstone.

While the city has received $458 million — twice as much as expected — there seems to be some question about whether taxpayers are getting anywhere close to an appropriate return on their “investment.”

McAdam adds: Remember how we groused back in November that the City spent $31 million to create 562 jobs, at $55,160 per job? Come to think of it, that was something of a bargain after all.

CNN recently reported on a survey of economists who said that the “stimulus” funding didn’t promote job growth.

Is this really news?

You can’t create jobs by taking money and giving it back.  It’s pretty simple, really.