If they’re not prepared for postsecondary education, they probably won’t ever graduate

The statistics are sobering.

That point was made by this graph presented to the Kentucky legislature’s Interim Joint Education Committee yesterday by Kentucky Council on Postsecondary Education president Robert L. King. 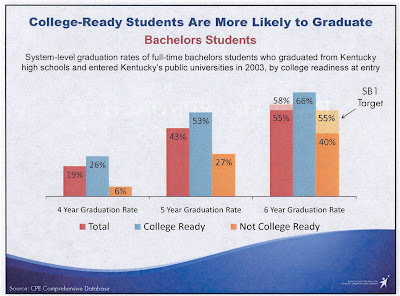 The orange bars on this graph show the odds of a Not College Ready student graduating in four, five or six years from a four-year college program in Kentucky. Even after six years of study, these students have notably less than a one in two chance they will ever get their degree.

In truth, even those students who are considered “College Ready” upon admission still face serious challenges. Only two of three prepared students get a degree even after six years in what should be a four-year program, as the blue bars show.

Note that this graph only considers recent Kentucky high school graduates, which makes it very pertinent to discussions of supposed success under KERA.

King’s statistics for the situation in the Associates’ Degree programs look much worse, as the next graph shows. 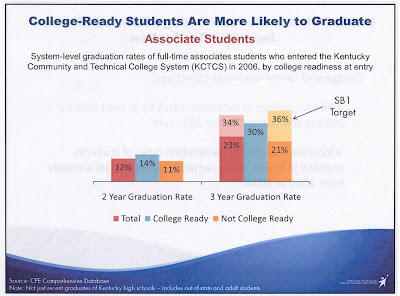 Even after an extra year of study, only about one in five students gets an Associates’ Degree in this state.

The hopeful news in these slides is that King projects the picture will improve as the impacts of Senate Bill 1 (from the 2009 regular legislative session) start to take hold. But, those are just projections at this point. It’s going to take a lot of changes in Kentucky’s public education classrooms to make those targets become reality.

How much do you think Grant County Schools spends on legal services?

So I hate to be the messenger but… 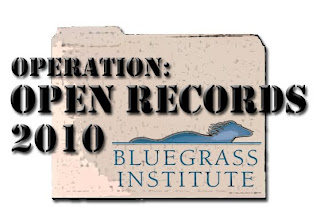 Yesterday, I posted a blog about how Grant County Schools decided that it would be a better idea to give the run-around for a simple Open Records Request (that had been filled by 30+ other school districts already) by opting to involve their legal representation rather than just send me the requested information.  I posted the letter I received from the nice folks at O’Hara, Ruberg, Taylor, Sloan and Sergent and asked this question:

Is it a good use of taxpayer money to involve a law firm in a simple Freedom of Information request when the request could have just been filled like all the other schools districts that received the same request? Furthermore, is it transparent?

Wow.  A six-figure expenditure for legal services in a school district with only 5 schools!?!?? Help me understand this.

Comparable school districts, such as Lee County Schools (4 schools), opted to spend money on legal services by individual use rather than a one time expense and spent a mere fraction of what Grant County did.

This is why our education system continues to “need” money.

The Jefferson County plan for busing students hither and yon has now collected a new set of complaints; this time it’s a 34 page report from the NAACP.

• The NAACP is upset that some parents who objected to long bus rides for their children apparently were successful in getting their children reassigned.

• The organization alleges “…certain board members appear to be trying to dismantle the New Plan (sic).”

• In a comment that seems aimed at Jefferson County’s magnet schools, there are also charges that, “…decisions about which students can and cannot attend certain schools in the district are made within the walls of those select schools. The decision is not based on grades or other academic factors, but a unilateral decision made by a principal or assistant principal.”

The report has a long section of recommendations. A very few highlights:

• Jefferson County School Board members should “Put students first”
• Jefferson County’s teachers’ union should “Accept that the most important group in the system is the students.”
• The greater Louisville community should “Demand more of School Board Members (sic) and hold them accountable.”

Find a link to the report in this article from the Louisville Courier-Journal.

King Tut’s tomb may have been found in near-perfect condition. But it’s obvious from the research: Kentucky’s education system isn’t ready for such an inspection.

I received a letter this morning from a nice group of attorneys representing Grant County Public Schools. I requested the criteria used to evaluate their superintendent and a copy of the most recent superintendent evaluation. Here’s the letter I received in response… 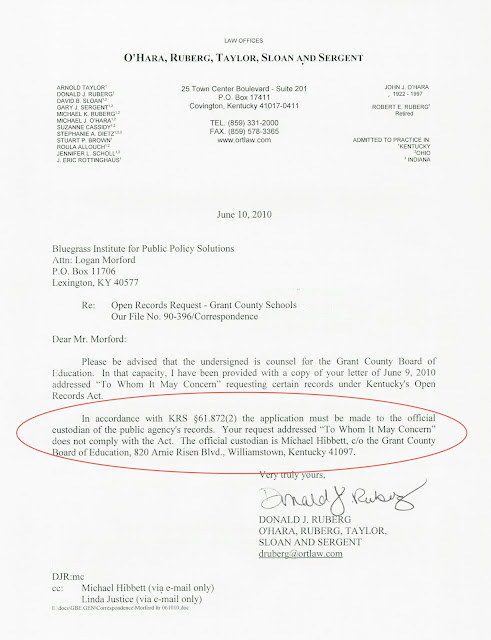 Is this transparency in public education and is this the best way to spend taxpayer money?

Recently the Bluegrass Institute hosted an event with author John Blundell.  Blundell is a biographer and  confidant to former British Prime Minister Margaret Thatcher.  In this discussion he provides a description of her life, a look at her policies, and some insight to how she would operate in today’s political climate.