Last week I wrote about some seemingly questionable and excessive spending on legal services by Grant County Schools.

This behavior seems to be the new “in fashion” for school districts.  For example…

We have noticed a high number of districts who use legal representation to reply to simple open records requests.  I think we all know that legal representation isn’t always cheap.  The services obtained by school districts are no different. Last year we did a records request to obtain Laurel County Schools check register.  So when we received a letter responding to the request for the superintendent’s performance review from the district’s attorney, we searched our database and found out how much they spent with this attorney in fiscal year 2009… 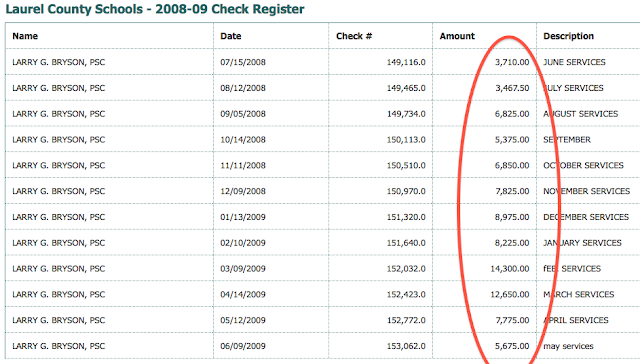 That’s a lot of money.  Now, granted, an organization the size of a school district is bound to employ attorneys at some point but isn’t it a bit excessive to be paying an attorney thousands of dollars a month to respond to records requests when the request could easily be filled in-house?

Oh, I forgot to mention – This attorney also represents the Pulaski Board of Education.

Is this a good use of tax-payer money?

The Prichard Committee for Academic Excellence and the Bluegrass Institute generally agree. Some Kentucky schools do a good job for students despite high poverty rates.

However, when it comes to measuring that performance, we have our differences.

Over at Prichard, they cooked up a “Transition Index” that attempts to carry on tradition with the remaining Kentucky Core Content Tests from the now defunct CATS. Prichard just used their contrived index to identify “high performance, high-poverty schools.”

Here at the institute, we prefer to look at more solid test results when possible. Thanks to Senate Bill 130 from the 2006 regular legislative session, we now have such data for our middle and high schools.

So, when Prichard posted a list of “high performance, high-poverty schools,” I decided to see what happened when I looked at the PLAN (grade 10) and EXPLORE (grade 8) results for those schools.

I went further, looking at the four-year trend in the PLAN and EXPLORE, as well as the year-by-year scores.

These two tables summarize what I found. First is the EXPLORE data. The “slope of the regression” column shows results from a standard statistical process that looks at data and then finds the best fit straight line approximation. A positive slope means overall the trend is increasing, and the larger the slope, the faster the rate of increase.

One school, the Kimper Elementary School, was way out of the top running for its trend in scores.

Of course, Prichard only looked at one year of data, for 2009, while the analysis above is much more extensive and considers four years of data. The lesson there is that you can miss a lot if you only look at a point in time when analyzing a school.

Here is the table for the high school PLAN results.

Once again, some of Prichard’s schools do well in this trend analysis, but not all do.

Worse, in 2008-09 four of Prichard’s seven high schools scored below state average on the PLAN Composite. Whatever these schools are teaching, it may create impressive KCCT scores, but it does not look like the schools are doing a good job of getting kids ready for postsecondary education.

The good news here is that some of the schools in both lists do a good job across the board for their kids. They are getting them better prepared than other state schools for postsecondary education. The caution is that simplistic evaluation of a single year of data from a test series that is being phased out isn’t exactly the best way to find those schools.

According to the Center for Education Reform’s Annual Survey of America’s Charter Schools (requires free registration), as of the 2009-10 school term, 742 charter schools had closed, but 5,042 were operating. So, of the 5,784 charter schools that were opened in the US, about 13 percent were closed. Most of those closed because they ran into fiscal problems.

In comparison, in Kentucky no regular public school has been closed, to my knowledge, due to poor performance.

The New York Times gets it right on this one.

“Groups that dislike standardized tests — and teacher accountability systems based on them — are blaming both for the cheating problem. But that’s like blaming the biopsy that turns up evidence of serious disease.”

Teachers who cheat on state tests ultimately cheat the kids, and those who do it deserve to be barred from the nation’s classrooms.

Politicians ‘Neal’ at the altar of hollow civil rights rhetoric

The Declaration of Independence confirms that ”all men are created equal.” But those are nothing but virtuous words for thousands of Kentucky’s public-school students being left behind in the American ”pursuit of happiness.”

Newsweek’s annual excursion into the statistical nonsense of ranking the nation’s high schools is out, and the big joke on everyone is that the Holmes Junior/Senior High School in Covington, Kentucky is ranked at 927 out of the thousands of high schools in the United States.

Here are a few facts about how Newsweek’s ranking goes awry.

• The denominator in the Newsweek formula is the number of graduates from each school in the report year in question. This approach winds up giving out bonus points to schools like Holmes that have high dropout rates. Many kids in Holmes, half of the Class of 2009, never make it to graduation. In Holmes the ratio of graduates to ninth grade enrollment was a dismal 50.8 percent for the Class of 2009. Statewide, the comparable figure for all high schools was much higher at 73.8 percent.

• Kentucky now tests all public school 11th grade students with the ACT college entrance test. Holmes Junior/Senior High’s 2009 ACT Composite Score of 16.3 ranked at 202 out of the 229 high schools that got score reports in that year. Keep in mind that by March of the 11th grade year when the testing was conducted, many Holmes students had already dropped out. This inflates the ACT statistic for Holmes compared to other Kentucky high schools which do much better jobs of retaining more students to graduation.

• Kentucky also tests all 10th grade students with another ACT product called PLAN. It is administered in the fall of each school year. The 2008-2009 term’s report provides data that shows Holmes’ PLAN Composite Score ranked 224 out of the 229 high schools that got scores reported for this fall-administered assessment. Keep in mind that fewer students had dropped out when this testing was conducted. That helps explain why Holmes’ rank deteriorates from 202 for ACT to 224 for the PLAN.

• Finally, only a handful of Kentucky schools ever performed so poorly in the state’s accountability program that they lost their School Based Decision Making Council authority to self-govern. Holmes was in the initial group of four schools that lost this authority in 2007. It still has not regained that self-governing authority, to my knowledge. Thus, in the eyes of the Kentucky Board of Education, this school must be considered among the state’s very worst performing.

OK, Newsweek, how’s that again about this school being among the country’s best? Sadly, it isn’t close to so. And, it is terribly unfair to present a ranking like this when other high schools here in Kentucky and elsewhere really do perform for kids.

I also wonder how many other schools in Newsweek’s listing got there due to similarly high dropout rates inflating their Newsweek ranking.

Note: Kentucky still lacks a high quality student tracking system, so estimation formulas must be used for graduation rates. Sadly, the current graduation rate data reported by Kentucky was audited in 2006 and found highly unreliable (particularly in Covington). Thus, we use another formula here. While the National Center for Education Statistics has determined that the best of these formulas is the Averaged Freshman Graduation Rate, that formula is somewhat cumbersome to calculate in Kentucky. The next best performing formula, which the NCES defines as the “Freshman Graduation Rate,” was used instead. It probably returns a figure about one or two percent lower than the true rate.

New Nonacademic Data information from the Kentucky Department of Education shows in 2009 Holmes graduated 165 students “on time” with a regular diploma and one additional student with learning disabilities graduated after five years of study. Two additional students without disabilities earned a regular diploma, but took more than four years to do so. That works out to a total of 168 total diplomas awarded.

According to the KDE’s “School Year 2005 – 2006 Growth Factor Ethnic / Membership by District and Grade” Excel spreadsheet, there were 331 students in the Class of 2009 when it entered ninth grade at Holmes (Note: Holmes is the district’s only high school).

That works out to a graduation rate of 50.8 percent.

The results for Kentucky’s 11th grade ACT testing for 2009 are found here.

The 2008-09 PLAN report is no longer on line. A current report that has updated numbers for this school year is available here and should show similar results.