The latest on the 2010 Open Records project

Visit the 2010 Open Records Project page on FreedomKentucky.org to see the most recent requests that have been made.  Of note…

Stay tuned, there is much more to come!

Recorded two years ago and just as relevant now.

You’re about to get mislead with NAEP Reading data

I wrote back in May and earlier about the recent release of the Trial Urban District Assessment results for 2009 from the National Assessment of Educational Progress (NAEP). Jefferson County took part in this for the first time in 2009.

I used this graph to help make that point (click on graph to enlarge). 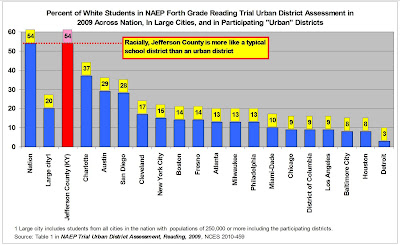 It shows that the racial makeup of Jefferson County is nothing like that in other urban school districts that took part in the NAEP Trial Urban District Assessments.

Now, the National Center for Education Statistics has released one-page “Snapshots” of the results from the reading assessment. As soon as I heard about them, I suspected these snapshots would be simplistic summaries that would totally ignore the serious problem of demographics.

I was right. The Snapshots are incomplete and can be misleading.

To learn more, click the “Read more” link below

Sadly, this typical “Snapshot” for grade 8 reading for Jefferson County 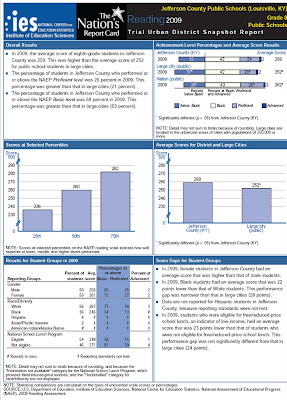 (click to enlarge), contains not a clue that Jefferson County’s 56 percent white demographic in the eighth grade is far larger than the inner city white percentage of 22 percent. Because whites strongly outscore other groups on NAEP, when more whites are present, they pull the overall average scores upward.

Note that while racial breakdowns for Jefferson County are presented on the snapshot, they are not provided for the inner city or national average groups. That hides the fact contained in the NAEP Trial Urban District Reading Report Card that while eighth grade whites in Jefferson County scored 34 percent proficient in reading, the average score for eight grade whites in large cities across the country was considerably higher at 42 percent. Even blacks in Jefferson County don’t do much better than blacks in large cities in the country, scoring 13 percent proficient in reading compared to the nationwide big city average for eighth grade blacks of 11 percent.

The bottom line is the NAEP Snapshots are incomplete and can be seriously misleading. Coming from the National Center for Education Statistics, that is a real disappointment.

You can bet that Jefferson County Public Schools will rush to use this misleading data to make all sorts of claims about performance that just won’t be so.

Without change there is no change. It’s business as usual in Washington, where the Obama administration is using raw power to push support to unions at every opportunity and in every way possible.

However, there is a limit on what people can pay to support such political nonsense.

In Kentucky, our leaders are on a spending binge and much of it is to satisfy, or at least pacify, the politically influential labor unions. But considering our economy has tanked, how long can Kentucky’s policymakers keep their heads in the sand? Even the United Auto Workers can no longer remain in denial:

Per the Detroit News:

– THE PAST: Union members received a slight wage premium over counterparts at Toyota in Kentucky or Honda in Ohio. Their benefits were better, their pensions richer and all of it contributed to the financial stranglehold on Detroit’s automakers.

– REALITY NOW: New hires will be paid roughly half what the veterans now get. Defined-benefit pensions will be replaced with defined-contribution 401(k) plans. Active members pay more for their health care, and so do the legions of retirees.

“The best contract in the world doesn’t mean anything if you don’t have a job,” said Ron Gettelfinger, UAW’s president who led during these tough conversions.

Leaders in Washington and Frankfort can’t correlate that support to what happened in Detroit. They can only encourage and promise the “way it used to be.” It’s pure nonsense.

Kentucky’s going to have to make some tough conversions, too, involving crucial issues: prevailing wage, ability to place teachers where they can make the biggest impact, out of control state worker defined benefit pension and insurance costs and a bloated state government.

A reasonable assumption is that a slowdown in the nation’s economy would also slow the growth of government employment — especially with the nearly double-digit national jobless rate and the even-higher 10.4 percent unemployment rate in Kentucky.

But “government” and “reasonable” offer the epitome of an oxymoron these days. 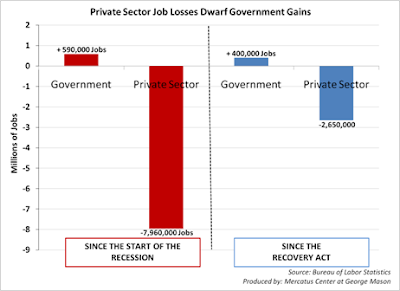 So not only are individuals losing their source of income for their families, taxpayers are being forced to shell out even more to ensure the continuation of a government whose policies have greatly contributed to our nation’s current financial funk.

Of course, more workers are needed to effectively carry out the barrage of new taxes, regulations and government mandates headed our way.

No, it’s not about the kids; it’s about adults in the system.

Furthermore, the blogger points out an outstanding example of how privatizing custodial services saved a Michigan school district big money as expenses dropped from $17–20 per hour to $9-10 per hour. Instead of the district’s schools being cleaned only every other day, they now get daily cleaning. In addition, the district will save $5 million over the next five years.

Somehow, the Michigan Education Association even tried to make this out as something bad for schools.