When the new federal data is compared to the high school graduation rates reported by the Kentucky Department of Education in its 1993 to 2008 Nonacademic Data Briefing Packet the inflation in Kentucky’s rates becomes painfully obvious. 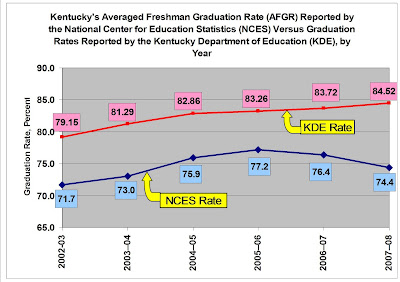 Notice that the federal graduation rate estimates generally run around 8 to 10 points lower than the Kentucky rates, and the difference has been growing recently.

Also note that in recent years the federal estimates show Kentucky’s high school graduation rate has been decreasing while the Kentucky Department of Education is claiming it increased.

The sad truth is that, nearly 20 years after KERA’s enactment, we still don’t have accurate data on high school graduation rates in Kentucky and we are not likely to see such accurate figures before 2013.

The fact that Kentucky continues to lag in this important data collection and reporting area, and the fact that the Kentucky Department of Education won’t even switch to a more accurate interim calculation of graduation rates until next year, raises uncomfortable questions about the quality of research on KERA’s performance and the candor of our educators in reporting that performance.

Also, the fact that many groups and agencies in Kentucky continue to quote, and even rank, the Kentucky Department of Education’s inaccurate information about graduation rates and dropout rates without ever mentioning the fact that this data was audited and found unreliable nearly four years ago raises questions about the research abilities of many groups who try to claim expertise in Kentucky education matters.

There is no question that many Kentuckians are finally waking up to the serious problems created by Kentucky’s chronically low high school graduation rates and the correspondingly large high school dropout rates.

Since then, all sorts of groups have been writing about graduation rates in Kentucky.

Sadly, except for the Bluegrass Institute, the Kentucky Auditor of Public Accounts and the federal government, virtually every one of these groups cite the same, grossly inaccurate graduation rates and dropout rates that the Kentucky Department of Education has been supplying for years.

I did a quick calculation of the 2008 Averaged Freshman Graduation Rate for Greenup County’s high school. Unless I’m missing something, it was only 67.27 percent. That is very different from the rate the Kentucky Department of Education reported for Greenup (83.78 percent), to say the least. That is the sort of discrepancy you can find when you use the department’s inflated formula. That sort of discrepancy is why the US Department of Education no longer trusts graduation rates from the states, but instead is publishing its own Averaged Freshman Graduation Rate calculations.

On pages 16 and 17 you will find an article titled “Persistence to Graduation,” which bemoans the fact that 2008 dropouts in Kentucky will cost the state $4.2 billion in lost wages during their lifetime. The number of dropouts associated with those lost wage estimates – 6,472 students. Mrs. Beshear has mentioned similar numbers.

But, those highly inaccurate dropout figures were used to calculate the red line in the graph above. Clearly, the state’s dropout reports seriously under-report the true number of dropouts, which, by the way, is exactly what the Kentucky Auditor of Public Accounts officially reported in its 2006 audit.

Other Kentucky education groups continue to make excuses and refuse to acknowledge the existence of the audit and the research and findings and the hard numbers in the graph above, from the IES.

Still, until 2013 (or maybe even later), the best estimates we have on high school graduation rates in Kentucky are coming from the feds. Those grim numbers are shown by the blue line in the graph. Not only does this line indicate that we are still losing at least one student in four prior to high school graduation, but the trend has recently gotten worse.

That is no success story for KERA.

The high school graduation rates shown by the blue line in the graph come from Table 3 in the new federal report. The IES calculated these rates from data on fall school enrollment and graduations for each of the years listed using a very carefully researched formula known as the “Averaged Freshman Graduation Rate.”

The Kentucky rates shown by the red line come from Figure 5 in the Kentucky Department of Education’s Nonacademic Data Briefing Packet. These are calculated with a formula known to the feds for producing inflated rates (see a 2006 federal report on this which comes as two separate volumes: Volume 1 and Volume 2).

See the various reports linked from this blog article for still more details about how the various formulas are calculated.

Check out this brilliant analogy by Schansberg at the Bluegrass Institute’s Friedman Legacy Day breakfast on Friday at the University of Louisville’s Elaine Chao auditorium.
http://vimeo.com/moogaloop.swf?clip_id=13774723&server=vimeo.com&show_title=1&show_byline=1&show_portrait=0&color=&fullscreen=1

Grocery Store Vs Public School Analogy from freedomky on Vimeo.

If you haven’t seen Ridley Scott’s latest version of “Robin Hood,” you should — especially if you’re an ardent lover of freedom and individual liberty.

I saw the movie recently and heartily recommend it. I also endorse Cathy Young’s review of the film and analysis of the history of the Robin Hood character in the recent Reason Foundation magazine. Young rightly concludes that Robin Hood, played brilliantly by Russell Crowe in the latest version, has captured the imagination of generations because of “freedom, not redistribution.”

Those who believe in using the power of government to take from those who earn and give it to those who won’t may think Robin Hood is their superhero. But as Young points out: “The earliest Robin Hood ballads, which date back to the 13th or 14th century, contain no mention of robbing the rich to give to the poor.” The person Robin helped in those earlier versions was a knight on the verge of losing his property to “the machinations of greedy and unscrupulous monks at an abbey.”

It was only later that Robin Hood “turned from an outlaw farmer into a dispossessed aristocrat and, eventually, a patron of the poor.” But even then, his primary opponent — and the object of the people’s loathing — is the Nottingham sheriff, who was hated not because of his badge but because of his moonlighting as a tax collector.

No longer should Kentucky’s leftist politicians, university professors, activists and groups take comfort in the popular notion that Robin Hood was a medieval socialist. Instead, freedom fighters across the commonwealth can include Robin Hood as one of their own.

He was, as Young puts it: “A libertarian rebel.”

The Bluegrass Institute honored the late economist Milton Friedman today in an annual event that featured a number of interesting speakers and a panel question and answer session.

Here is the keynote address from the Bluegrass Institute’s Vice President for Policy and Communications Jim Waters. Stay tuned for more from this event.

This just in! Friday links!

Could something similar have happened here?

Editors at the Boston Globe are clearly worried about the replacement of two of the Massachusetts Board of Education’s most outspoken critics of the recent decision to drop Massachusetts’ highly regarded education standards. Instead, the state is signing on to the ‘Common Core Standards’ that Kentucky recently adopted.

“The education bureaucracy rolls unimpeded without Stotsky, a prickly expert on English language arts, and Fortmann, an exacting math consultant.”

Under its soon to be replaced standards, Massachusetts has been cleaning up on recent testing from the National Assessment of Educational Progress (NAEP).

In NAEP reading in 2009 in grade 4, Massachusetts scored 47 percent proficient, while the US average was only 32 percent and Kentucky posted a 36 percent rate. In grade 8 reading, the percentages were 43 percent in Massachusetts, 30 percent nationwide, and 33 percent in Kentucky.

Of course, as I have written before, Kentucky enjoys a huge and unfair advantage in these NAEP comparisons because we are not a diverse state. In 2009 grade 4 reading NAEP reported 84 percent of Kentucky’s fourth grade students were white while in Massachusetts only 69 percent were. US wide, the white population was only 54 percent.

Anyway, I have to ask – Why would a state give up on success like that?

Closer to home, our own Kentucky Board of Education is getting a major rework, as well. Some of the same concerns the Globe raises about a loss of people willing to speak out may apply here, as well. Gone, in particular, is hard-charging Joe Brothers, former chair of the board. It remains to be seen if the replacement members maintain his strong push to address our chronically low-achieving schools or return to the ask no deep questions mode of operation that generally hampered the board ever since it was reformed in 1990 by KERA.