Kentucky rates a D for protecting your private property

Did you know civil forfeiture law permits seizure of your property without you being charged with a crime?

Kentucky gets a “D” for protecting your property.

Federal law allows law enforcement to circumvent the limited protections of state laws. Local law enforcement officials also often get to keep proceeds obtained from these forfeitures, which creates incentives that — not surprisingly — could lead to abuse.

Policing for Profit: The Abuse of Civil Asset Forfeiture should be a wakeup call to all of us.

Are you concerned now?

The Kentucky Board of Education held its first meeting with its five recently appointed members, and the Department of Education Staff did a really nice job with a series of morning briefings on the state of education in the state.

Three main areas were covered in the morning briefings:

I was pleased by the level of candor and information in these very worthwhile, 45 minute presentations. 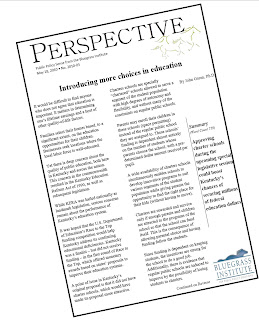 The Bluegrass Institute was even singled out in the political environment discussions as the department’s example of groups advocating for education policies. That presentation also provided the board members with copies of Professor John Garen’s recent Bluegrass Institute Perspective on “Introducing more choices in education.”

Clearly, the department considers the institute as part of the important landscape in Kentucky.

The afternoon meeting was kicked off with a top-notch Power Point briefing by Kentucky Commissioner of Education Terry Holliday about the strategic plan for education in the commonwealth. Once again, the honesty and candor were very welcome.

These various briefings covered a lot of specific information, some of which I’ll cover in future blogs. But, one item that I have been campaigning on for a long time now seems to be settled: As I have been pointing out for years, most recently only a few days ago, the graduation rate the department has been reporting is considerably higher than what we will see once high accuracy information becomes available in 2013. The Department of Education now admits that. Commissioner Holliday and others warned the board that we will indeed see the current graduation rate drop by about 10 points once more accurate reporting starts. Holliday estimates that the true graduation rate is only in the low 70 percent region (which clearly is not the 84 percent area the department previously has been reporting).

The Commissioner and other staff members also confirmed that the department is going to switch next year to the Averaged Freshman Graduation Rate formula that the US Department of Education and yours truly have been pushing. Because this is a much more accurate estimation formula than Kentucky’s old one, the Commissioner warned that rates reported in 2011 will also be much lower than before.

It’s taken too long to happen, but it looks like the department under Commissioner Holliday’s lead is starting to get really serious about assembling and analyzing higher quality data on education. That can only bode good things in the future for Kentucky’s students.

One sad note was that board member C.B. Akins was absent due to recent, very serious surgery. We at the institute wish him a speedy recovery.

Today’s commentary comes from the Bluegrass Audio Archives. This editorial on school choice originally aired in February 2009, but its message that competition is the right prescription to improve Kentucky schools remains relevant.

There has been quite a bit of activity on FreedomKentucky.org since Operation: Open Records 2010 started at the beginning of the summer!  We have started adding some charts and icons to better translate the responsiveness and information found as a result of the vast number of open records requests we have been conducting.

Charts, like the one below, are intended to help track the process of the request.  They will contain information related to what the request is, date, if it was responded to in the legally required three business days, if the information was obtained in the requested format, and if the institution/department dealt with was helpful. Here is an example:

In addtion, icons will accompany each request that will indicate the status of the request:

Hopefully, these will enhance the experience of Operation: Open Records 2010!  You can see examples here!

Daycare centers are being cut out of bus routes, causing more pain for parents

Every time I think the Jefferson County school bus mess is about to calm down, I’m proved wrong.

This time, the school district’s busing tsars are disrupting sometimes long-term arrangements between working parents and their day care centers.

The Paducah Sun reports (subscription) that the McCracken County Public School District’s employees are going to hear a motivational speech from Ron Clark. Clark is an educator known nationally for his work to motivate elementary students. He gained national attention in 2006 when a made-for-television movie highlighted his story.

In any event, while schools across Kentucky whine about tight funding this year, the price for Clark’s one-time, 90-minute presentation works out to $16,000 for Clark plus an added $1,750 for auditorium rental and snacks and drinks for the attendees.

Anyway, Clark normally hangs out in his PRIVATE school down in Atlanta. According to the Atlanta Journal-Constitution, Clark’s PRIVATE school spends twice as much per student as Georgia public schools do to educate each child. It works out to $18,000 a year per student.

Somehow, I don’t think McCracken County is going to be able to emulate spending per student at that level.

I think a lot more economical lessons could be learned from the leader of a good KIPP charter school, instead. Unlike Clark’s expensive private school, KIPP academy funding is generally similar to, or even lower than, regular public school costs.

In any event, check out what his home town paper has to say in an article titled “Ron Clark Academy success comes at a price few schools can afford.”

Clark may have some great ideas to offer, but somehow I get the feeling that Kentucky taxpayers are just going to wind up footing most of the bill for a kid to attend a private school in Georgia, with little to show for it in Kentucky.