IMPACT replaces a former, awkward and time-consuming process for removing poor teachers, a largely dysfunctional process similar to those typically found in virtually every school system in the country.

“Last month, union members and the D.C. Council approved a contract that raises educators’ salaries by 21.6 percent but diminishes traditional seniority protections in favor of personnel decisions based on results in the classroom. The accord also provides for a “performance pay” system with bonuses of $20,000 to $30,000 annually for teachers who meet certain benchmarks, including growth in test scores.”

Thus, DC teachers accepted a significant pay increase in exchange for being willing to allow the worst performers to be removed from classrooms. But, contract or not, the union really didn’t mean it. Now, the union tells the Post it intends to fight the dismissals. Apparently, union leaders thought they could take the extra money without honoring the new responsibilities that came with it.

Rhee is not without her critics in DC, and the school situation there is apparently part of the political fight to see who will be the next mayor in the nation’s capital. Thus, the jury is still out on whether or not the IMPACT process will stick. But, it is clear that many more are growing frustrated with an educational system that continues to cover up mediocre teachers while the education of children suffers. At least in DC, they are trying to do something about it.

Meanwhile, the Kentucky Educational Professional Standards Board tells me here in The Bluegrass State we don’t even have a policy, awkward and time-consuming or not, on how a school administrator can go about removing an under-performing teacher. The board says they are unaware of any teacher in the state who ever lost credentials because of inability or unwillingness to teach at an acceptable level of performance.

A new report presented by Gaston Caperton, the president of the College Board (which creates the SAT college entrance tests and runs the AP program) is loaded with educational comparison data for the 50 states and Washington DC.

One of the most disturbing graphs (Figure 9.2c, page 149) shows that Kentucky seriously lags the national average for completion of Associate Degrees as of 2007. Students in our state’s two-year programs who entered in either the 2004-05 or 2005-06 school terms only succeeded in getting their degree 23 percent of the time. Nationally, 27.8 percent of two-year degree candidates got a degree within three years of entering college. The state ranks 35th in the nation on this statistic.

These students graduated from high school in 2004 or later, so they spent their entire K to 12 school experience in KERA-influenced schools. Also, most two-year students in Kentucky are from in-state high schools, so this is a reflection of KERA, not out of state education systems.

Kentucky’s 23 percent graduation rate from two-year colleges should not be a big surprise to our long-term readers. The Bluegrass Institute has stressed for some time that Kentucky’s remedial course requirements for recent high school graduates who go on to college are very high.

Still, it’s sad to see that our extensive spending on KERA has not created better results for the state’s two-year college candidates from 2007.

Busting the myths about farm subsidies

Farm subsidies were never meant to serve as a permanent cash cow for large farm operations.

The New York Times reports today about something we’ve been talking about for some time – the fact that not enough of our younger citizens are going on to, and completing, higher education.

A new report presented by Gaston Caperton, the president of the College Board (which creates the SAT college entrance tests and runs the AP program) says that while the US used to rank number one in the world for the percentage of its 25- to 34-year olds with college degrees, we’ve now sunk to number 12 among 36 developed nations.

Today, Canada leads the international degree competition with 56 percent of its younger adult citizens holding at least an Associate’s Degree. In the US, only 40.4 percent from this age group hold such credentials.

Things are even worse for US minority and disadvantaged students. The College Board’s president indicated that only 30 percent of our African-Americans and just 20 percent of our Latinos hold postsecondary degrees.

A graphic included with the report shows that at present the percentage of Kentuckians aged 25 to 34 who hold at least a two-year degree ranks only 39th among the 50 states and Washington, DC. 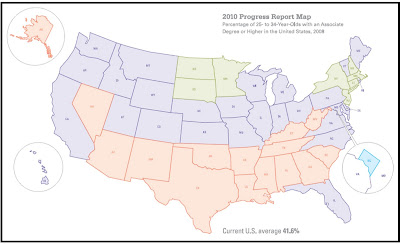 What does the College Board say bears major responsiblity for the decline in US degree holders? Answer: the K to 12 education system in the United States.

The College Board had no trouble outlining many shortcomings with the K to 12 program in the US.

Of course, that will be no surprise to our steady readers.

There is a lot more of interest in the new College Board Report, so stay tuned.

Can You Hear US now? Part 2

Here is the second installment of “Can You Hear US now?”, citizens speaking out about what they want to see their government do differently!

http://vimeo.com/moogaloop.swf?clip_id=13530964&server=vimeo.com&show_title=1&show_byline=1&show_portrait=0&color=00ADEF&fullscreen=1
Can You Hear US Now? from freedomky on Vimeo.