The Bluegrass Institute celebrates the decision by the Government Contract Review Committee to express unanimous disapproval of forcing Kentucky taxpayers to spend $200,000 on a contract that allows the Kentucky Climate Action Plan Council, a front group for the radical, Washington, D.C.-based Center for Climate Strategies.

The institute led the way in shining the light on this extremist, albeit legislatively quiet, group.

This panel allows no debate or questioning of climate warming assumptions at its meetings at the Kentucky Energy and Environment Cabinet.

It’s good to know that sane, competent lawmakers in Frankfort don’t think forcing taxpayers to contribute to a George Soros-funded project is such a good idea. We’re hoping the Beshear administration will honor the people’s wishes, which would certainly be evidence of political climate change in Frankfort.

Check out this great video about federal spending projects.  A great display of the absurdity of the “stimulus”…

Have an example of a ridiculous government spending project? Learn how to share it here!

A new report from the Kentucky Department of Education lists results for this year’s full testing of all 11th grade students on the ACT college entrance test. I blogged yesterday on how our students performed against the ACT Benchmark Scores that indicate good college preparation. That discussion showed we have a very, very long way to go.

In a bit of good news, while scores remain well below what is desirable, they are inching up a bit for most of the student groups reported. 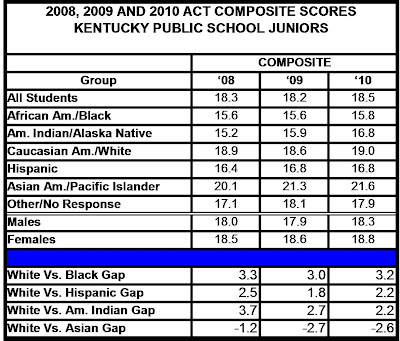 The top part of this table, which comes from the Kentucky Department of Education’s news release 10-043 about the scores, shows the only exception of note to the general progress in scores is for Hispanics, who made no improvement from 2009 to 2010.

Kentucky’s largest minority group, the African-Americans, lost a little ground to the whites in the scoring gap for 2010 versus 2009. So did the Hispanics. However, the gaps in 2010 for both these racial groups are not as large as they were in 2008. Still, the gaps shown here are substantial, indicating that we have a lot of work to do to provide good educations to our minority students.

I will probably have more comments once I get a chance to review the full set of data from the department of education, which you can also access here.

• We wanted more reliable information about how our schools were doing in getting students ready for follow-on higher education studies,
• We hoped that adding these tests to our accountability system would encourage schools to become more focused on college preparation,
• We also hoped that some bright students who were not considering college would be encouraged to do so, and finally,
• We hoped that students who needed more work and assistance would learn about their deficiencies in time to improve.

The slow inching up of scores indicates that the desired effects are starting to appear even though the rate of progress is far slower than desired. 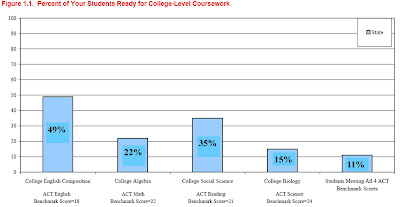 Education committee lawmaker: It’s time to think outside the box, give parents choice of charters

DeCesare is a member of the joint education committee. The Bluegrass Institute and Kentucky Educational Restoration Alliance (KERA) provided both written and oral testimony at Monday’s hearing.

(Note: If the link above does not work with your browser, click here)

New accountability program will include assessment of gap performance

The Kentucky Department of Education (KDE) made a lot of comments about the state’s endemic achievement gaps during the Kentucky Board of Education’s August meeting and retreat.

This discussion started with Associate Commissioner Ken Draut’s presentation during the retreat part of the meeting. Ken provided a nice review of the many different performance gaps for student groups in Kentucky using a detailed, 25-page handout titled “Academic Performance Data.” This handout is available in two parts, Part 1, with Pages 1 to 19, and Part 2, with Pages 20 to 25.

Ken’s handouts have lots of data on the gaps from such indicators as the Kentucky Core Content Tests, graduation rates (using the credible Averaged Freshman Graduation Rate formula instead of our old, inflated calculation), the ACT college entrance test and the ACT’s EXPLORE and PLAN tests and the National Assessment of Educational Progress (NAEP).

I capture just a small amount of Ken’s presentation in these two graphs, which show the gaps on the Kentucky Core Content Test (KCCT) in reading and mathematics. 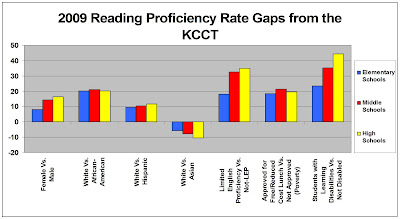 Several things stand out in the reading graph. First, Asian students do notably better than whites at all school levels, but the trend gets more favorable to Asians in the upper grades. What do we need to harness from our Asian students and transplant to our whites?

Also notice that the gaps by racial group vary dramatically.

Here is the graph for mathematics. 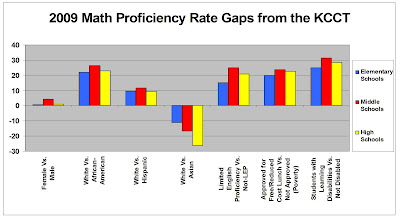 The trends are generally similar, with one added note. The KCCT’s Female Vs. Male gaps in Kentucky favor females, which is definitely not what we find in other testing such as the NAEP, where males in Kentucky do better than the females. The differences are small for the sexes, but there may be an indication here of potential bias in the KCCT results by sex.

In any event, it is clear from the graphs above and the very extensive data presented in Academic Performance Data that Kentucky needs to pay attention to its persistent education gaps. Thus, it is good to see that gaps are a specific highlight area in the state’s strategic plan, which I mentioned in an earlier blog. It is also good to hear that the department intends to include a separate metric for gaps in the state’s new public school accountability program. 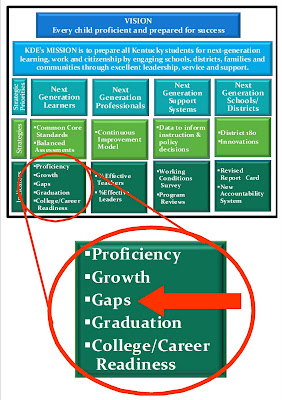