Dreams really do come true … for government workers supported by your tax dollars.

– Average 22 percent more per hour
– Get both defined contribution pension benefits and thrift saving plan
– Can retire at age 56 with full benefits after 30 years
– Get benefits are worth $32,115 versus the private-sector average of $9,882
– Get job security with unemployment going from 2 percent to 2.9 percent while the private-sector climbed from 4.2 percent to 10.6 percent
– Leave their jobs at one-third the rate of private-sector
– Pay is set by Congress under a wage-fixing pay scale based on seniority, not performance

There you have it – big government, big pay, big benefits and no accountability for performance. Wow.

We should all be so lucky. But we aren’t. The federal compensation approach must end now before each one of us has to support two government workers. They’re getting way too heavy to carry anymore.

“Corbin High to be given ‘High Schools That Work’ Pacesetter Award”

Can you hear us now!

Join the Bluegrass Institute at the Freedom Fest Rally on Saturday, July 10. Help us create a video montage that will be sent to Frankfort and D.C.

What’s your message in 60 seconds?

Where: State Capitol, Frankfort, KY, on the Great Lawn

Bluegrass Institute will be Booth #1, the first booth at the top of the stairs on the left hand side (facing the capitol).

Stop by and let us record your 60-second message to Frankfort.

In a recent post I discussed the amount of money spent on attorney fees by Laurel County Public Schools in fiscal year 2009.

I was curious as to how much the school district paid their attorney to respond to my request since the response I received was from their legal counsel.  I sent an open records request to obtain this information.  Sure enough, in compliance with the law, I received the invoice sent to the Laurel County Board of Education… 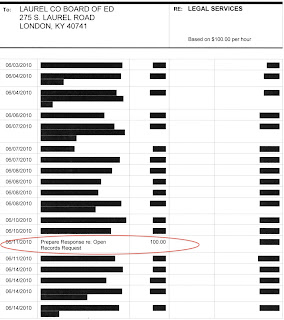 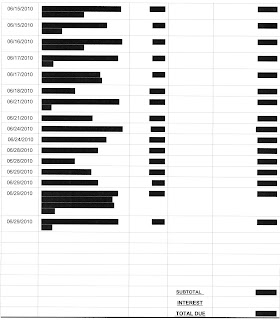 I shouldn’t be surprised that all other expenses on this document were blacked out, leaving me with the sole $100 charge for responding to my records request.  Regardless, I’m still bothered by two things here…

Again, I’m not the smartest person in the world, but it seems like school districts could have someone on staff fill these requests rather than forwarding them to attorney’s and paying way more than they need to for making copies and dropping a superintendent review in the mail.  In most cases, the superintendents themselves personally responded to my request for the evaluation.

When will we stop wasting money?

Check these links out today…while you are in the air conditioning.

Subsidies have been a staple in U.S. agriculture since 1933 when the Great Depression led to the adoption of the Agricultural Adjustment Act, the nation’s first comprehensive food policy legislation.

The basic premise behind agricultural subsidies is to supplement on-the-farm income, thereby allowing small, family farms to compete with large agribusiness operations and/or foreign producers who experience economies of scale or other production advantages. On the surface it appears to be a noble cause.

However, there are two problems with farm subsidies: 1) private businesses are being supported by public funds and 2) the intended beneficiaries are not the ones receiving the subsidies.

U.S. Senate candidate Dr. Rand Paul is taking some heat over his recent comments concerning farm subsidies. Appearing on a Kentucky Educational Television debate, Paul said, “I don’t think federal subsidies of agriculture are a good idea … They often go to large corporate farming and I’m not in favor of giving welfare to business.”

If my time in agriculture, both professionally and educationally, has taught me anything it’s that Paul is unequivocally correct.

In 2009, the top 1 percent of Kentucky farms collected 22 percent of the subsidy payments, with an average payment of approximately $66,000 per recipient. For example, Seven Springs Farms in Cadiz received almost $370,000 in subsidies despite having an operation of over 19,000 acres. To put this into perspective, the remaining 80 percent of farm operations received only 17 percent of the payments.

It’s hard to argue against the intentions of agricultural subsidies, especially when the image of the idyllic farm struggling to make ends meet comes to mind. Unfortunately, that idyllic farm image is long gone, yet the subsidies that accompany it still remain.